I HAD A GREAT time at Wizard World Chicago Comic Con this weekend! These conventions always seem to fly by; one minute it’s Thursday and it looks like tons of time ahead… and then all of a sudden it’s 4 p.m. Sunday and you’re packing up to go home.

This year, once again author wrangler and moderator extraordinaire Genese  Davis pulled me in to do panels on fiction writing and help with managing the author tables in the exhibit hall. I talked on panels on writing suspense and getting published — with her energy at the moderator mic, those events flew by faster than any other con panels I’ve ever sat on.

While we missed seeing Mort Castle this year, over the course of the weekend I did enjoy catching up with Genese, Jay Bonansinga, Jeff Jacobson, and Brian Pinkerton and I met Tim Lees for the first time. 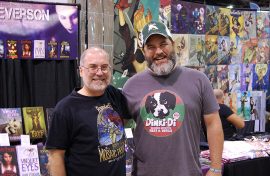 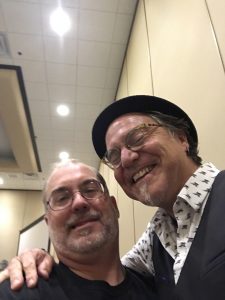 The weekend started for me on Thursday; I took my booth stuff down to the Rosemont Convention Center during my lunch hour at work, which made load-in really easy – I pulled up on the side of the center and was able to walk all my stuff back to the table in just a few minutes. I pulled a sheet over it and went back to my dayjob for the next few hours, and then came back around 5 to finish setting everything up and start the show.

Thursday is always a pretty slow night at these events it seems (I did talk to someone who said he wanted to turn The Pumpkin Man into a movie… always a fun, if typically nonproductive conversation). But it’s a good time to “get the lay of the land” for the rest of the weekend which gets progressively busy. And it gave Brian Pinkerton and I the chance to go for dinner across the road at MB Financial Park at Park’s Tavern. A Pink Floyd tribute band was playing outside… complete with female stage dancers… which I don’t recall Pink Floyd ever having. 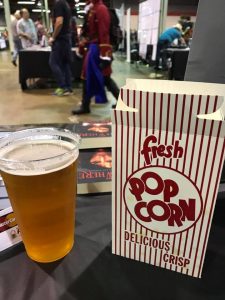 Despite there “being” a Thursday night, Friday is really the start of this convention. It’s the first full day of three and the first time you see many crowds. Brian Pinkerton and I held down tables a few aisles apart (which made it a little hard to catch up as we did last year).

As the morning hours waned, I enjoyed watching the costumes slowly begin to work their way into the hall, while enjoying a healthy con lunch of popcorn and beer! During the slow times, I worked on a chapter for my new book The House By The Cemetery, since I had a deadline approaching.

I didn’t have any panels on Friday, so I was able to talk to people and costume watch at my table all day. It’s amazing to spend a day in a giant exhibit floor hall like this, because you can literally feel the energy build and build as more people enter. The noise level increases, the hallways start to feel busy instead of empty… and then after things peak, all of a sudden there will be a lull, when everyone goes to lunch or to some big panel on the other side of the convention center. It’s like someone opened a giant window somewhere and let the air out. 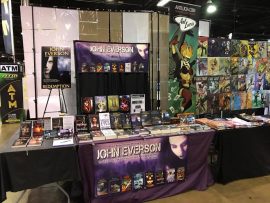 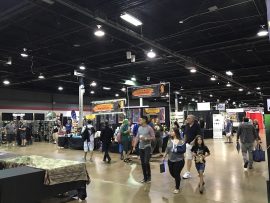 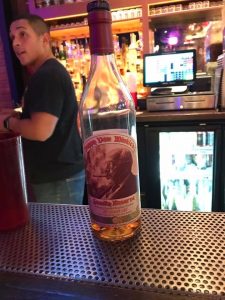 At the end of the night, I had a drink with Brian at Bub City, but then he had to leave, so I had dinner at the bar on my own.  I was enjoying a 3 Floyd’s IPA and some smoked pork when two guys came in to celebrate a birthday. One asked if the bartender had any Pappy Van Winkle bourbon. My ears perked up. I used to drink Pappy all the time when I was younger and it was readily available. Then the company and its stock were sold and suddenly I couldn’t find it anywhere… only rumors of bottles selling for hundreds of dollars.

The bartender returned with a bottle of 20-year-old Pappy’s and said it was $60 a shot.  And the guy bought one!

All I could think was “Damn, I wish I had sold enough books at Comic Con to go crazy and buy a $60 shot of Pappy Van Winkle!” To think I used to buy whole bottles of that for my home bar at the liquor store for $45… and now you can’t find it anywhere except in bourbon bars for $60 or $80 bucks a shot!

Saturday, as with most cons, is the busiest day of Comic Con. The most traffic, the most costumes. I had my first panel on Saturday at 11:30 a.m., so I left my table and went to meet Genese Davis and Jeff Jacobson to talk about:

Science fiction, Fantasy, and Suspense Storytelling
Having trouble instituting your sci-fi saga? What about your epic fantasy story? Or that heart-pounding thriller? Creating worlds and characters can be a daunting idea. However, with the right tools and inspiration, storytelling and world building hindrances can disappear.

It went by super fast, as panels with Genese always do. She’s one of the best moderators I’ve ever seen at a convention.

Later at my table, I continued a tradition started last year at HorrorHound and found some “violet” spokesmodels for Violet Eyes, as well as a really cool woman to take NightWhere on a Time Warp: 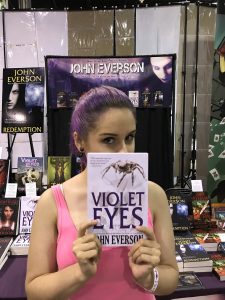 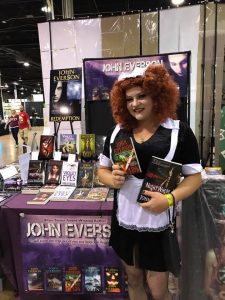 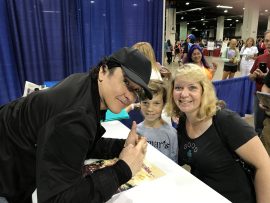 Geri and Shaun came down with me on Sunday to enjoy the convention and help me tear down the booth at the end of the day. We also had a mission — last month at Flashback, Shaun got Curtis Armstrong and Amanda Wyss to sign a poster from the movie Better Off Dead… at Comic Con, we set out to add the movie’s lead to the signatures — John Cusack.

We saw his line was short at the start of the morning so we hopped in it thinking we’d be back to my table before the hall got too busy… but then… he was delayed. And delayed. I had a panel at 11:30, so after 45 minutes went by with no Cusack, I had to leave Geri and Shaun to meet him without me – I had to get my things and go to the other end of the convention center for my panel.

About two minutes after I sat down in my seat for the panel, Geri texted me the picture above!

I wish I’d been there, but I’m glad they got to meet him and we now have a pretty cool signed poster. While I was on the panel, they went back to watch my table, (Artists Alley, Booth B20) and Shaun the Evil Bookseller took over on my behalf!

The panel itself was great, had lots of audience participation and covered:

How to Get Published: From Concept to Under Contract
How do you wrangle a writing contract, snag an agent, or gain the interest of a publishing house or film studio? Find out what really makes a page-turning story so gripping and what entertainment agencies, film producers, agents and publishers alike are looking for during this dynamic discussion! Genese Davis (The Holder’s Dominion), Jay Bonansinga (The Walking Dead: Invasion), Tim Lees (Devil in the Wires) and John Everson (Redemption) will divulge how to best navigate the often confusing waters of the writing, screenwriting, and the publishing world. Panelists will share their insider experiences for their genres including tips and tricks for creating stories that captivate!

Afterward the panel, Jay Bonansinga came back to the table and signed his Walking Dead books for fans. It was awesome to catch up with him for an hour or two – the first time in a year. I first met Jay almost 20 years ago at live reading shows at Chicago’s Twilight Tales reading series. It’s strange to realize we’re both still in this game, all these years later.

After Jay took off… the rest of the afternoon disappeared quickly. It’s an early close on Sunday, and a quick teardown and bang. It’s all over! Geri and Shaun did a little shopping, and then helped me pack up the booth and take it all to the car. And then we had a great dinner at Park Tavern and… 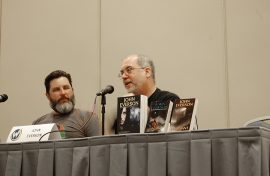 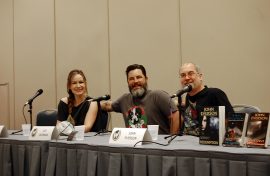 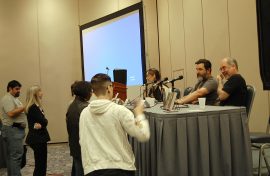 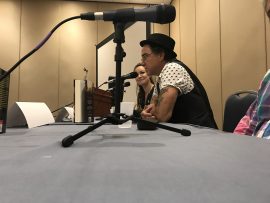 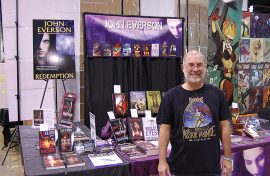 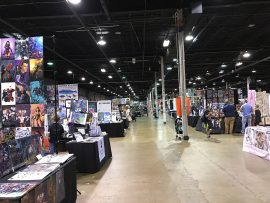 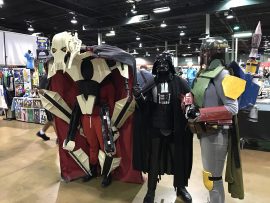 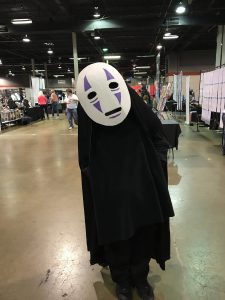 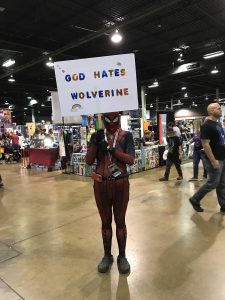 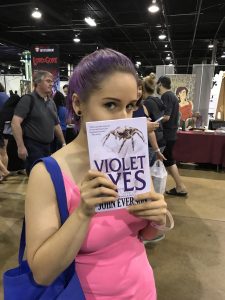 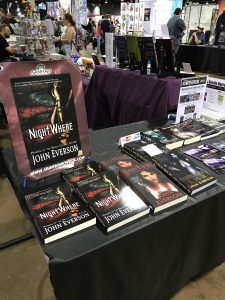 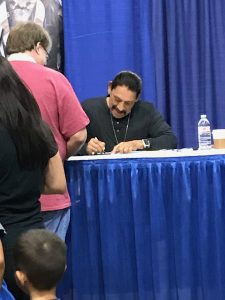 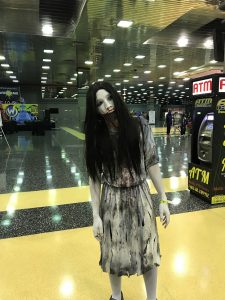 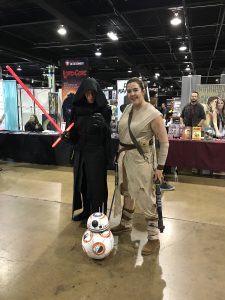 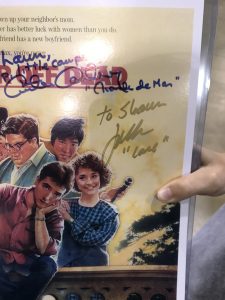