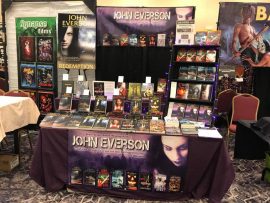 I HAVE GROWN to really love HorrorHound Weekend in Indianapolis as much as I love my own hometown Flashback Weekend Convention. I started going to HorrorHound a few years ago because my last publisher, Samhain Publishing, was a major sponsor and so they had a large space at the front of one of the exhibit halls… and six to eight of their authors hung out at the table all weekend signing books.  But when Samhain went bellyup, I started getting my own booth at the con. It was a great time last year, and a blast once again this time around! 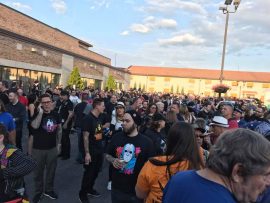 Just like last year, I headed down on Friday to set up my booth and get ready for the mid-afternoon crowd, while Geri and Shaun drove down on Saturday morning so they didn’t miss school or work.

So they missed the evacuation, when someone set off the fire alarm in the hotel and sent all of us to stand in the parking lot for 15 minutes.

The buzz of the weekend was the opening of the new adaptation of Stephen King’s It… and there was evidence all weekend of Pennywise stalking the convention hallways! 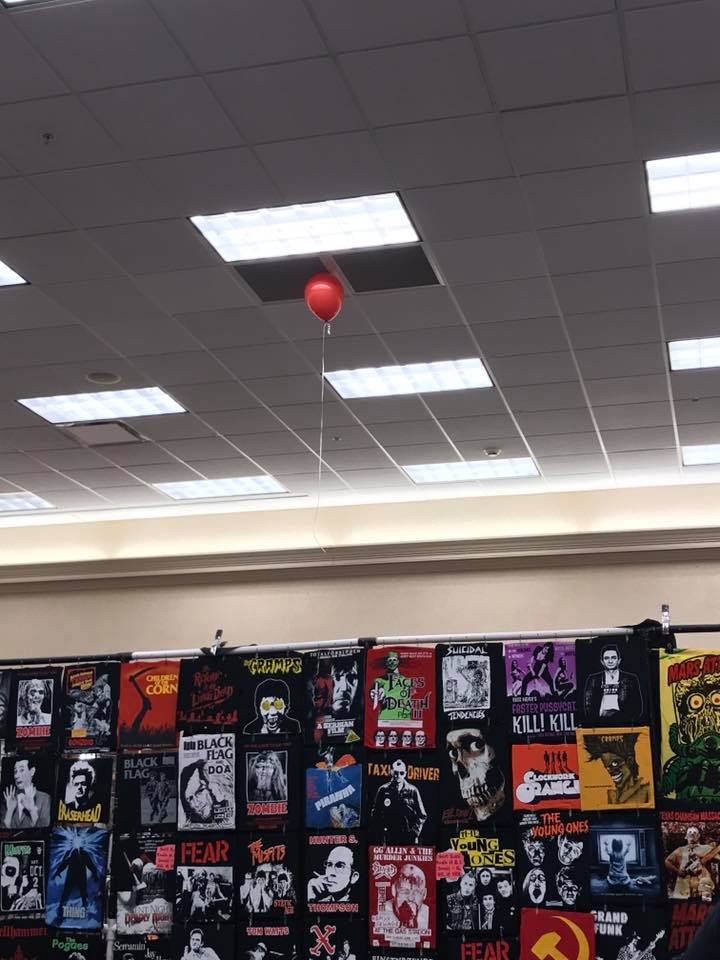 Everything Floats at HorrorHound!

The purple lives on… 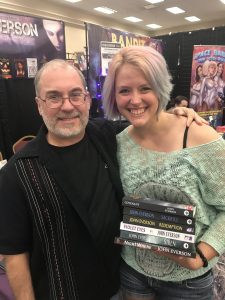 Last year at HorrorHound, I met this cool girl with purple hair named Linsi Miller and asked her to pose with a copy of my purple-est book, Sacrificing Virgins. She took a copy home with her… since then, I have shot a few more “purple hair” pix at conventions… but she was the first “purple” girl.

This year she came back to HorrorHound (sans purple hair) – and turns out, she loved Sacrificing Virgins and wanted some of the other books! She ended up with a stack and we talked for quite awhile — it was so cool to be able to catch up with her! I really hope she enjoys the books.

I continued the “tradition” she started over the rest of the weekend at the con, occasionally having people pose with the appropriate book cover. Here are some of the results: 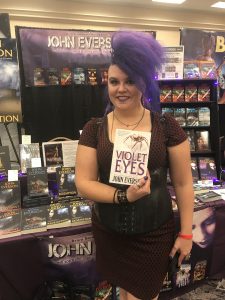 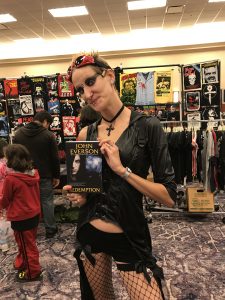 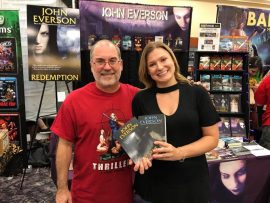 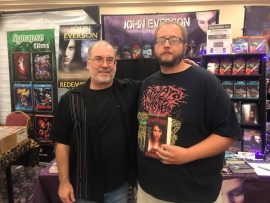 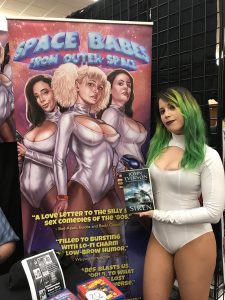 The booth right next to mine was promoting a film called Space Babes from Outer Space, and had one of the actresses from the film hanging out for a few hours. Their film was the midnight movie on Saturday night so I asked if a “Space Babe” would give a Siren a little love.

The result was this fun shot!

My Facebook captions for the photos above included “Pairing violet hair with Violet Eyes! (or… Frankenhooker loves the creepy spiders!)” and “Who knew you could find Redemption… at HorrorHound Weekend in Indianapolis?” And of course “Space Babes from Outer Space love Siren (go figure!)”

Hanging with the Synapse Crew 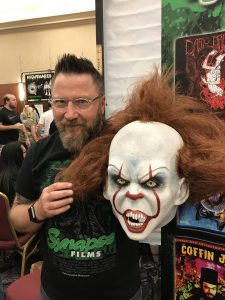 My booth neighbors on the other side were Jerry Chandler and Don May from Synapse Films. We always try to get side-by-side tables at HorrorHound and Flashback so that we can catch up, which makes the weekends go by super fast.

They had Paul Lanner (who scored the creepy clown mask) and Jarrod Littleton helping them with the table this time around and the bunch of us went to dinner at the hotel restaurant on Friday night. Luckily they scouted ahead for the table, because by the time I got there, the line at the hostess stand was down the hall.

You’d think the hotel would know how to staff for this convention after all the years of hosting it, but it seemed like they hadn’t brought in anymore kitchen and wait staff then they would on a typical mid-week night. The menu was abbreviated and any orders took about an hour to arrive.  But… it did give us all plenty of time to kick back and talk! 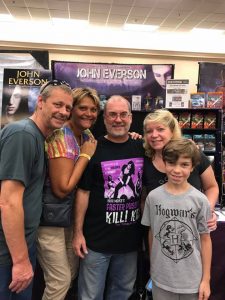 Our former next-door neighbors, Diane and Troy Horn, moved out to Indianapolis a couple years ago, so Saturdays at HorrorHound are now serving as a reunion party for both families.

And this year, my friends Lon and Amy also headed down on Saturday — the whole group of us used to do horror movie nights together around Halloween in my basement, so Saturday — always the busiest day of the convention — was an extra blast with all of them on the convention floor with Geri and Shaun.

A bunch of them went around and saw plenty of cosplayers as well as members of the movie casts from Lost Boys, Bates Motel, Friday the 13th. They also caught Sean Astin and Corey Feldman at panels. 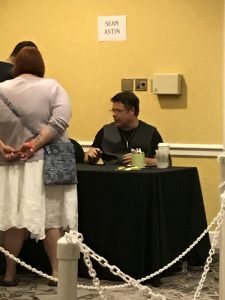 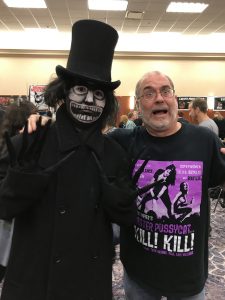 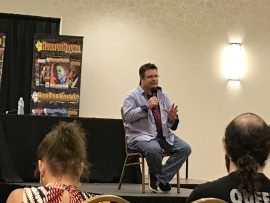 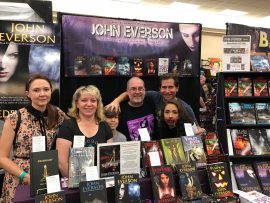 And it was an even better reunion at the Horns’ house after the exhibit hall closed on Saturday night.

On Sunday, as the con began to wind down, I left Geri and Shaun to mind my booth for a little while while I walked around and “shopped” (found a cool Dead Alive lightswitch for my office and a couple DVDs) and found something I really need in my front yard:

At some point I got a great picture with the Synapse crew before we all started tearing down tables and putting everything in boxes until the next con: 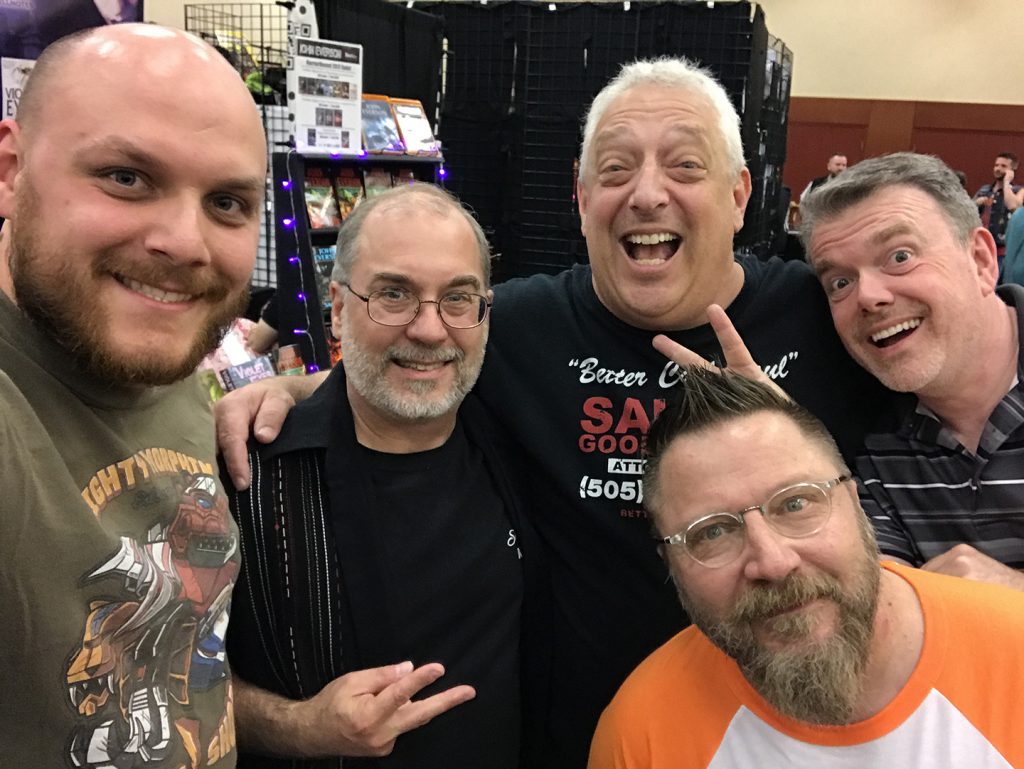 Later, after the hall had closed, in the midst of tear-down, Corey Feldman was walking around with an entourage so I lingered a bit in between trucking boxes out to the car wondering if he’d be at all interested if I offered him one of my books. Sure enough, he ultimately came down my aisle, so I asked if he liked horror books at all.  He shook his head with a smile and said no, and gave me some kind of blessing before moving on. Oh well. I tried!

It’s kind of a tradition now for me to end every trip to Indianapolis at Scotty’s Brewhouse. Love that place. So… once the car was packed and HorrorHound 2017 was officially an event of the past, I stopped there for a Blazing Blue Bacon Cheeseburger and a Uinta Hop Nosh Tangerine IPA for dinner. Dogfishhead 90-minute IPA for dessert.

And then… it was time to follow Geri and Shaun  (who’d left a couple hours earlier) up I-65 home to face the real world work week! 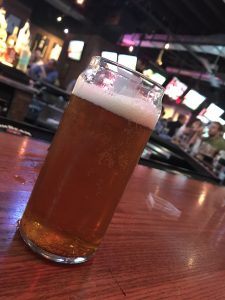 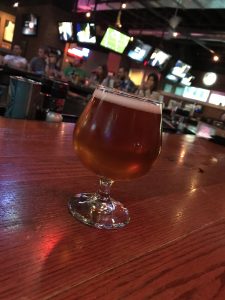