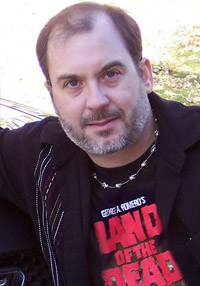 John Everson is a Bram Stoker Award-winning horror author with more than 100 published short stories and 13 novels of horror and dark fantasy currently in print. His first novel, Covenant, won the Bram Stoker Award for a First Novel in 2005. His sixth novel, NightWhere, was a Bram Stoker Finalist in 2013. His 13th novel, Five Deaths for Seven Songbirds was released in March 2022. His characters Danika and Mila Dubov appear in the Netflix series V Wars.

In 2011, Amazon.com’s 47North imprint licensed his Leisure catalogue and his next three novels were released through Samhain Publishing and eventually reprinted by Dark Arts Books. Sinister Grin Press has released hardcover editions of Violet Eyes and The Family Tree.

Covenant, Sacrifice, The 13th, Siren, The Pumpkin Man, The Family Tree, Violet Eyes, NightWhere and The House By The Cemetery have been translated or are in the process of being translated and released in various countries including Poland, Turkey, France, Czech Republic and Germany.

Over the past 25 years, John’s short fiction has appeared in more than 50 magazines, including Space & Time, Dark Discoveries and Grue. His work as also appeared in a couple dozen anthologies, most recently in Midnight in the Graveyard, Chopping Block Party, Fearful Fathoms, Into Painfreak, Cemetery Riots and V-Wars: Night Terrors. His short stories have also been translated and published into Italian, Polish and French.

“Letting Go,” one of the short stories from Needles & Sins, was nominated for a 2007 Bram Stoker Award and five other short stories from the collection have been included in the Honorable Mention List of the annual Year’s Best Fantasy & Horror anthology co-edited by Ellen Datlow.

John is also the editor or co-editor of the anthologies Swallowed by the Cracks (Dark Arts Books, 2011), Sins of the Sirens (Dark Arts Books, 2008), In Delirium II (Delirium Books, 2007) and Spooks! (Twilight Tales, 2004). In 2006, he founded Dark Arts Books (www.darkartsbooks.com) to produce trade paperback collections spotlighting the cutting edge work of some of the best authors working in short dark fantasy fiction today. The press has since produced seven anthologies and reissued out-of-print novels and collections by Martin Mundt, John Everson and Brian Pinkerton.

When not writing, John also enjoys working as a digital artist and musician – some of his dark techno music serves as the soundtrack to the horror fiction CD-ROM anthologies Bloodtype and Carnival/Circus, and in 2003 he scored Martin Mundt’s comedic serial killer stage play “The Jackie Sexknife Show” in Chicago. For his giallo novel Five Deaths for Seven Songbirds, he composed and recorded a giallo-eque theme song.

John shares a deep purple den in Naperville, Illinois with a cockatoo and cockatiel, a disparate collection of fake skulls, twisted skeletal fairies, Alan Clark illustrations and a large stuffed Eeyore. There’s also a mounted Chinese fowling spider named Stoker courtesy of fellow horror author Charlee Jacob, an ever-growing shelf of custom mix CDs and an acoustic guitar that he can’t really play but that his son likes to hear him beat on anyway. Sometimes his wife is surprised to find him shuffling through more public areas of the house, but it’s usually only to brew another cup of coffee. In order to avoid the onerous task of writing, he records pop-rock songs in a hidden home studio, experiments with the insatiable culinary joys of the jalapeno and designs book covers for a variety of small presses. He also loses hours in expanding an array of gardens and chases frequent excursions into the bizarre visual headspace of ’70s euro-horror DVDs with a shot of Makers Mark and a pint of Revolution Anti-Hero IPA.

For information on his fiction, art and music, poke around here at John Everson: Dark Arts at www.johneverson.com.