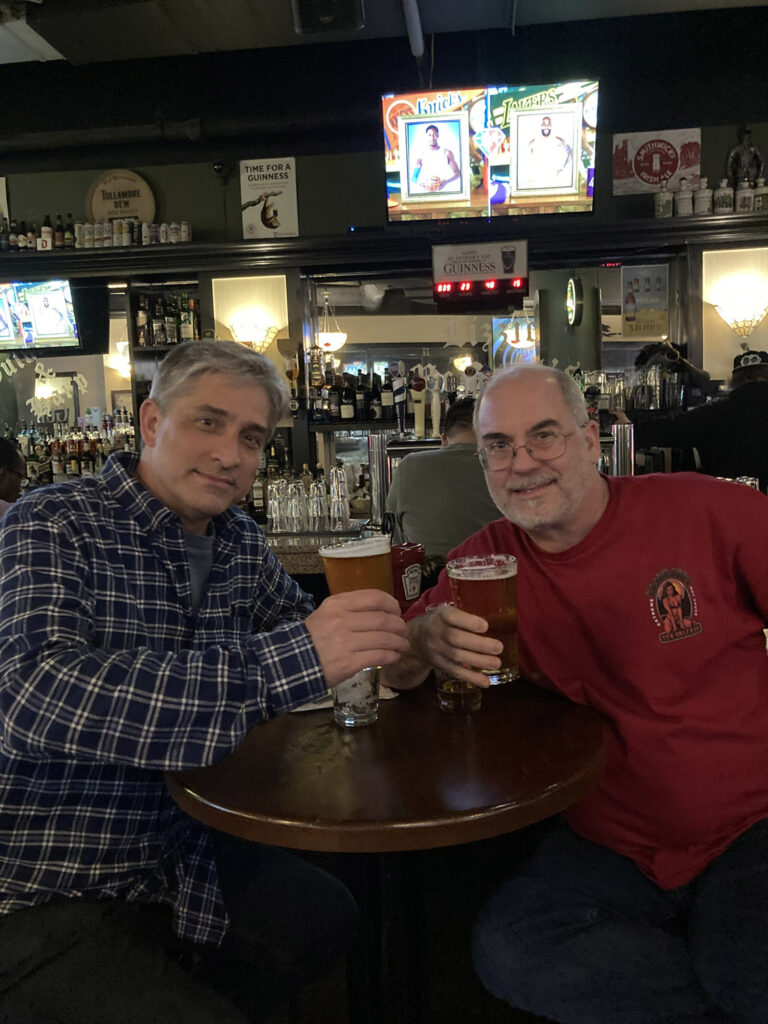 IT WAS A GOOD YEAR. I won’t say a VERY good year, but 2022 wasn’t bad. While things started returning to normal after the worst of the pandemic was over in 2021, this year, while masks were still very much in evidence, we all kind of went back to travel and concerts and… DOING things. The difference was, you worried way more than ever in the days leading up to a concert or a party that you might come down with COVID and have to miss it.

Luckily… while I had a touch of pneumonia that killed several weeks in the fall, I didn’t have to pull the plug on any events this year. I think I saw my friend Brian Pinkerton (pictured here) more than ever this year between the conventions and concerts we hung out together at.

I finally got to go back to my beloved Pinball Expo, and took my “book booth” to Capricon, Flashback Weekend, Comicopolis, Krampus Fest, Fan Expo and two HorrorHound Weekends (where I got to meet Ian McCulloch of Lucio Fulci’s Zombie). I also saw one of my stories turned into a quick skit this fall at a “Haunted Library event in Glen Ellyn, IL and had a table at the Berwyn Library’s Local Author Day. And I spent a week in Boston for my dayjob’s annual Fall convention and had a brief work trip to Austin, Texas.

I also saw a bunch of concerts: I finally got to see one of my favorite synth bands,  OMD (the links in this section all to to my YouTube videos of the shows). I saw Goblin for the third time, performing the soundtrack to Suspiria live. I took my son Shaun to see Jacob Collier, and my wife Geri to see Shaun Cassidy. And Geri and I caught up with our friends Bill Gagliani and Dave Benton when we drove up to Milwaukee to see Dennis DeYoung’s Hunchback of Notre Dame musical where I got to introduce Bill and Shaun to Dennis since I used to see him quite a bit when I was a music critic!

I caught a great outdoor summer show by the remaining members of Material Issue and The Smithereens) and went to three great shows with Brian Pinkerton — the Roxy Music 50th anniversary tour, Nick Mason performing early Pink Floyd and Howard Jones with Ultravox singer Midge Ure, who we got to meet after the show. 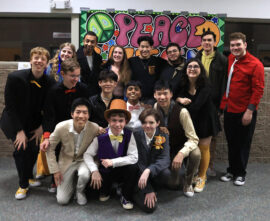 This was also a big year for my son Shaun’s bands. His Naperville Central High School Jazz Combo did several shows, including a showcase at a classic jazz club in Chicago and he was a rock star in the NCHS Drum show in the spring.

I spent many Friday/Saturday nights in the first quarter of the year driving him to practices for Pi Percussion, a high school / college age competitive percussion ensemble and ultimately drove to Dayton, Ohio for a few days in the spring to see him and Pi perform in a national percussion championship (WGI Finals), which was an amazing experience.  His group placed sixth in their class, and some of the “showcase” acts put on shows that would rival a Vegas production.

It was a really exciting weekend – and in addition to the performances, I visited a cool barcade, a Troll bar and took Shaun to Record Store Day while we were there.

the past few months, we’ve spent a lot of time celebrating “last time we’ll…”  events with Shaun and starting the “get ready for college” journey. He’s a senior in high school now, so we’ve visited a bunch of colleges in the summer/fall and had the bittersweet experience of helping as parent volunteers at his final high school Marching Band season (he was the section chair for the Front Ensemble, playing marimba).

This winter, he decided not to play marimba for a WGI competitive band again (which bummed me out, honestly!) and instead is playing piano in the Youth Jazz Ensemble of DuPage, which pulls some of the best high school kids from the county together to record an album and possibly earn a slot in a NY jazz competition.

The first quarter of 2023 will be college decision time — with us driving around from college to college as he does music auditions at each to decide which university he’ll end up at for a degree in music education.

A Good Year for Books!

In March, my 13th novel Five Deaths for Seven Songbirds was released. This one was really a labor of love for me — a tribute to the giallo movies from Italy in the ’70s that I am absolutely obsessed with and have been for years. It also led me to write and record a song for the first time in ages – because giallos have to have a theme song! You can listen to the result here.

I was super excited that two of my favorite giallo filmmakers – Sergio Martino and Ernesto Gastaldi – agreed to blurb the book. Their endorsement meant as much to me as a blurb from Stephen King. (You can read what they said on the Five Deaths book page.)

I visited several area book stores to sign copies of the novel, which was the first time I’ve gotten to go store-to-store for a little promo tour in a long time! 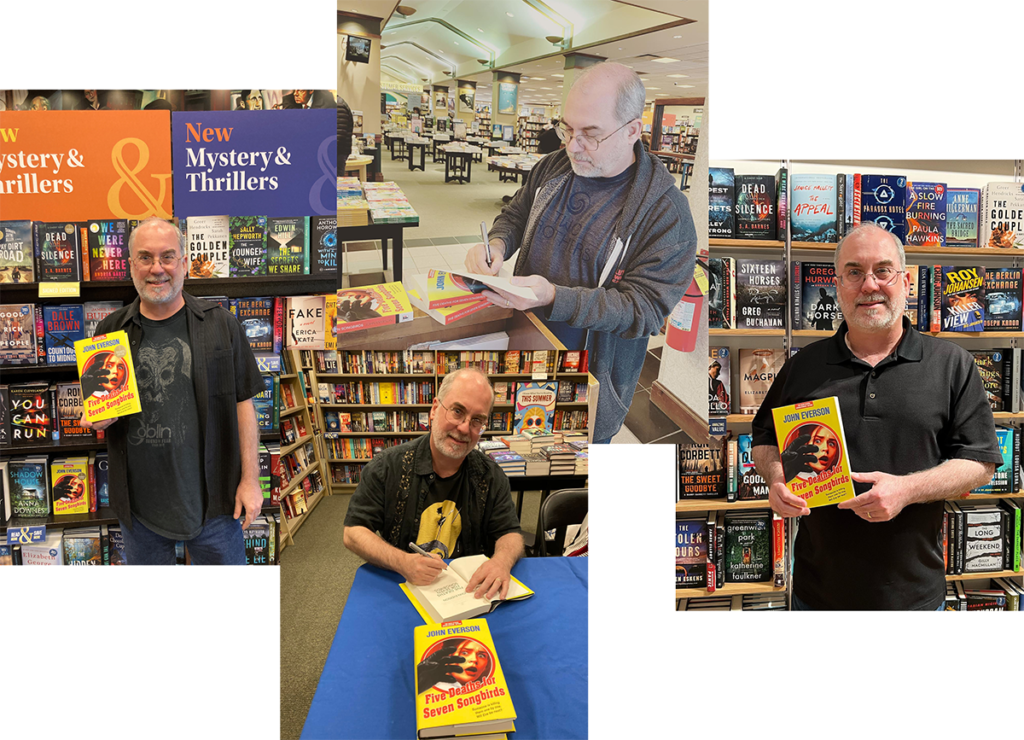 After Five Deaths was out on the street, I finally knuckled down over the next three months and finished the long-talked about sequel to NightWhere, The Night Mother. I’ve wanted to revisit NightWhere for a decade so I was excited to finally write The End on the new book in July.

Both NightWhere and The Night Mother will be issued by Flame Tree Press in May/June 2023. 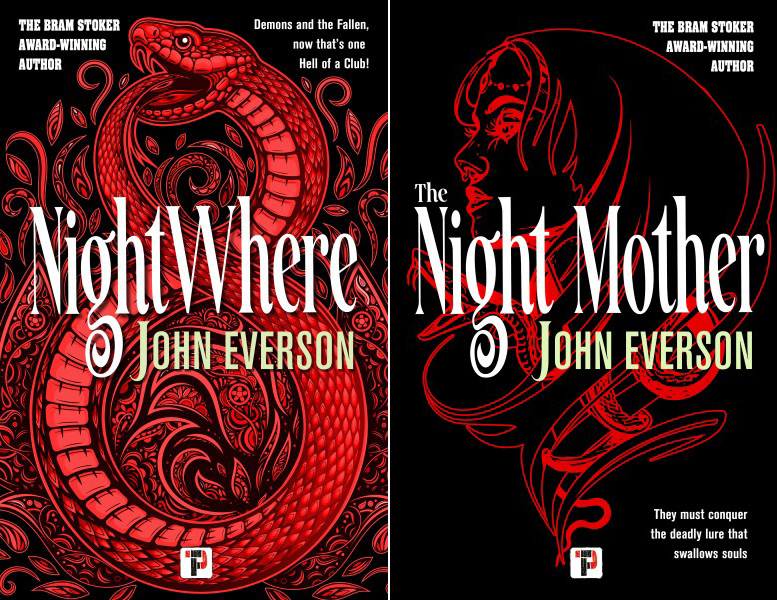 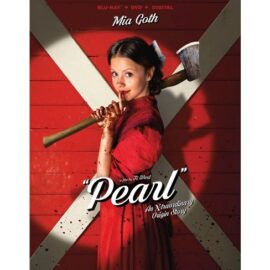 I’m a huge movie lover, and I track the films and genres that I watch every year (it all goes into a spreadsheet!) Most of what I watch is older — cult giallo, horror and art films from the ’70s-80s. And this year, I saw around 120 films. Only a handful of those were released in 2022, but I really enjoyed the new Knives Out: Glass Onion film, Fantastic Beasts: The Secrets of Dumbledore and Ti West’s X and Pearl duo of films were both excellent.

Sad to say, I was not a huge fan of Smile or the Halloween and Hellraiser reboot entries.

This year I broke my vow to not watch TV series. I’ve always avoided getting sucked into them, not because  I won’t enjoy them, but precisely because I will. And… if I’m spending hours watching series, I won’t be doing any writing. But… I couldn’t resist seeing the new Wednesday series from Tim Burton (LOVED it) or Star Trek Strange New Worlds (EXCELLENT!) or Guillermo Del Toro’s Cabinet of Curiosities (Pretty good) or Neil Gaiman’s Sandman (Not bad… though somehow I expected to be wowed more).

I also had to watch Season Two of Star Trek Picard (AWESOME) and Season Three of Stranger Things (weakest of the three, but I liked it).

Year of the Giallo 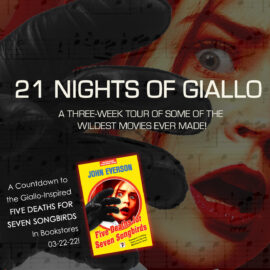 With the release of Five Deaths, my giallo novel, I ended up rewatching a lot of classic giallo films, including my all time faves The Strange Vice of Mrs. Wardh, What Have You Done To Solange, Death Walks at Midnight and The Red Queen Kills Seven Times. I also discovered a couple good ones that I’d never seen, including Death Carries a Cane and No One Heard the Scream. All told, I saw about three dozen gialli this year.

I didn’t blog most of the year because I think I tired myself out in March — to lead up to the release of Five Deaths, I posted a giallo film review every day for three weeks in March under the heading 21 Nights of Giallo. You can read all those giallo reviews here: Week One | Week Two | Week Three.

In July, I also got to enjoy seeing some giallo on the “big screen” when Facets Multimedia in Chicago presented a Giallo Gellato special evening with three films, including The Psychic, Investigation of  a Citizen Above Suspicion and Your Vice is a Locked Room and Only I Have the Key.

And…. as mentioned in the concerts segment, I also got to see classic Giallo score maestro Claudio Simonetti and Goblin perform some of their theme music in December at Chicago’s Thalia Hall.

I listened to a ton of music this year, because 4-5 nights a week, I turn on DJ shows on Twitch.TV and listen to goth/punk/club/industrial music while I play pinball in my basement. My favorite DJs are DJ Slave1, DJ Melting Girl, Evilyn13, and Red Party NYC, but there are a bunch of others too. The result, however, is I didn’t BUY a lot of music and I don’t actually know the artist names of half the songs I really like! But… I know I did love new releases by Boy Harsher, Wet Leg, Leathers, Actors, Death Cab for Cutie and more. 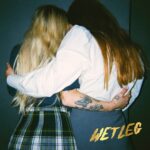 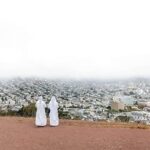 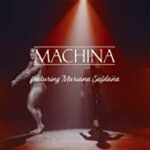 And a few books:

I didn’t read nearly as much as I wanted to this year (like… 10 books!) but I did really enjoy (finally) reading Dan Brown’s amazing Angels & Demons, Nina Kiriki Hoffman’s Thresholds and Clive Barker’s Mister B. Gone. I was trying to move some things off my To Be Read list that have been on my dresser for over a decade, so this year I read nothing published after 2011! 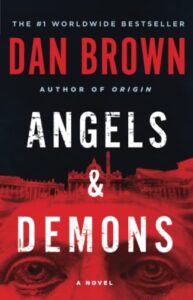 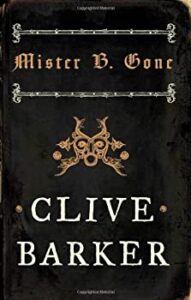 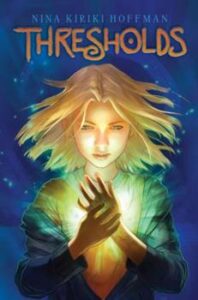 And here we are…

With a return to business as usual for the most part, 2022 slipped by fast. Weeks seemed to go by like days. And for the most part, it was a pretty good year. We even enjoyed a rare family reunion with my brother Michael and sister Michelle. While I’ve seen both of them over the past decade, when Mike came to stay with us a couple days in May, it was the first time we’d all been in the same place in many many years! 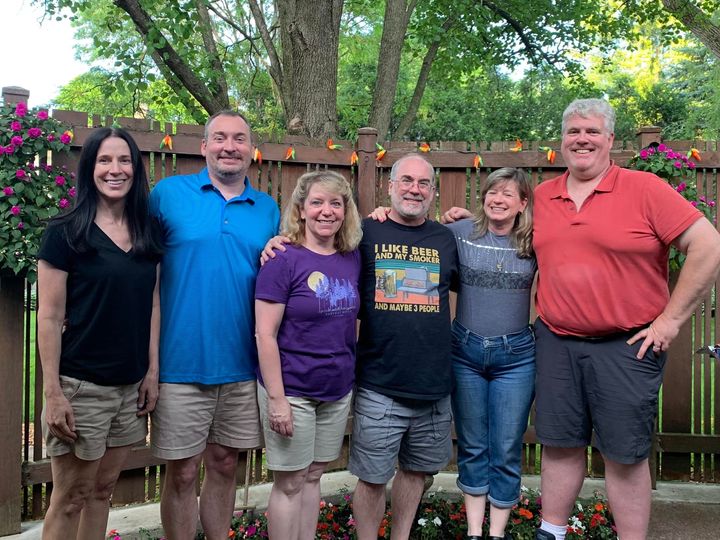 Hopefully, 2023 will be an even better year. It certainly started out good – after I watched the New Year Countdown on TV last night, I went downstairs to play some pinball and listen to my favorite DJs on Twitch, and… I started an epic game of Sorcerer, my favorite machine. I play this table incessantly, at least 10 hours a week on average. But I didn’t set a high score on it in all of 2022.

In the first two hours of 2023, I played a single game for over a half hour, turned the scoreboard over (it only goes up to 9,999,999) and racked up a new personal best high score of over 12 million. Not a bad way to start the year! Hopefully it’s a portent of things to come.