SIREN hits #1 in Horror on Amazon.com!

YESTERDAY MORNING, I woke up expecting to log onto my computer to find that my e-book sales had quieted after a month of excitement.

Amazon.com had been featuring The 13th and Sacrifice at $2.99 throughout January, but I knew when those went off sale at midnight on Jan. 31… things would probably settle down.

Instead… I found that on February 1, Amazon.com took those titles off… but put Siren on their next Kindle 100 promotional list – a perfect “antidote” book, actually, for Valentine’s Day month!

This time though, they plugged my novel into the top promotional sale spot on the SF/F page — and priced it at $0.99. That means that all the Amazon promotional emails that went out today featured Siren‘s bookcover in them!

How awesome is THAT? 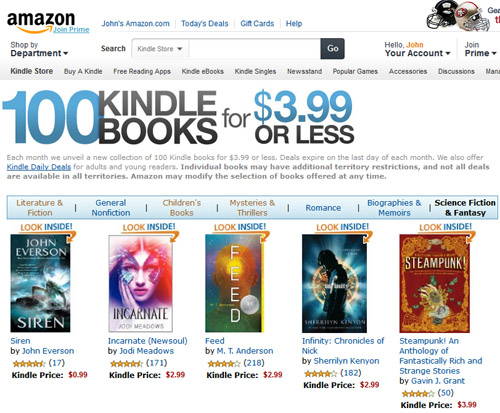 It’s currently the #161 Top-selling book on all of Amazon — and the #1 book in Kindle’s Horror Section! 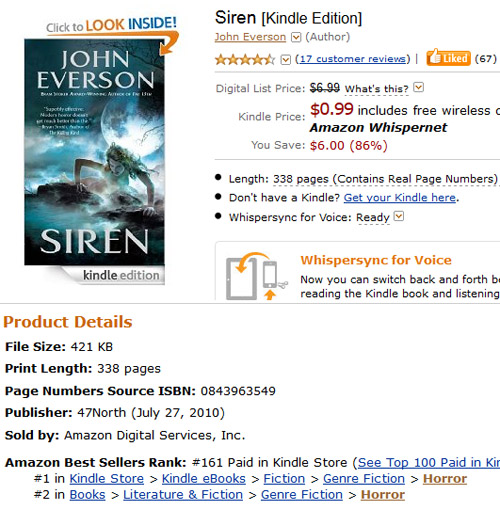 This is a crazy, amazing thing for me. Back in 2010, Covenant got to #699 on the Amazon charts and sold a couple hundred books, thanks to a .99 cent sale, but that has been the highest I’ve ever gotten, and it was very short-lived.

Since Siren will be featured on the Kindle 100 Books Under $3.99 page all month, it should have strong sales and positioning all month long.

I’m extra happy about this because Siren pretty much got the shaft on its paperback release. A week or two after it hit stores in August 2010, Leisure Books pulled the plug on its entire mass market line — after 40 years of monthly releases! They tried to revamp their line, and Siren was reissued the following summer in trade paperback format… but even that release was gunned down. It was heavily stocked in Borders Books… and less then a month after the “new” Siren hit shelves, Borders declared bankruptcy.

Maybe Amazon should be careful – this book might have a hex!!

But maybe, just maybe, this could finally be my Siren, Ligeia’s year. She’ll even have a translation released in Germany this spring: http://www.festa-verlag.de/ligeia.html

I’m pretty excited about it all, and hope readers will check out the book … and more importantly, enjoy the read!