MY WIFE CALLED ME at work yesterday to tell me Roger Ebert had died.

I really wish that she’d called me to say something else. Like ‘could you pick up some milk on your way home.’

I wasn’t Roger Ebert’s friend; I never met him (though honestly, I always wanted to). But he was more of a rock star to me than most rock stars — which is saying something given that I was a music critic for more than 20 years.

Roger Ebert has been an inspiration to me for my entire writing life. He was a critic who was creative, an intellect who was entertaining. He had a heart AND a brain… an a great sense of humor. He was more than the real deal, he was the top of the crop.

When I was an editor at my high school paper in the early ’80s,  I remember following Ebert’s reviews, as well as the columns of his fellow Chicago Sun-Times writers Roger Simon, Robert Feder and Irv Kupcinet. These were the guys I wanted to be when I grew up. Journalists with creativity and passion and a voice who had a picture and a presence — and real personality — in the newspaper every day.

As a journalism student at the University of Illinois, I found that Ebert was a graduate, and, in fact, had been an editor at the same college newspaper that I eventually became a columnist and Special Sections editor for — The Daily Illini (of course, he was there over 20 years before me). When I took my first film classes at the U of I and strayed from my usual music writing to publish my first film reviews in the Daily Illini (of John Carpenter’s Prince of Darkness and Prince’s Sign ‘O’ The Times), I thought of Roger Ebert.

When I graduated and became a music critic for Chicagoland’s Star Newspapers (ironically owned by the parent company of The Sun-Times) I was inspired by Ebert, at least in a small way. He was reviewing movies, I was reviewing music. I never had his depth of phrasing or intellect, but in some ways, throughout my twenty years as a music columnist and occasional movie reviewer, I always saw Ebert as one of my inspirations. A fellow Illini who had gone before, and made good. Better than good. He’d become an icon. 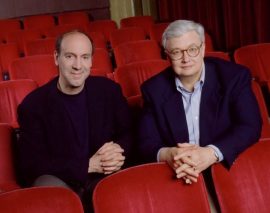 Roger Ebert went beyond the page too, launching At The Movies, the first successful movie review television show with the late Gene Siskel. They made Chicago a “center” for criticism; our “guys” were transmitted to the world. What will the world be now, without them both?

The writer of one of my favorite cult films

The icing on all this was that before he was a nationally lauded critic, Ebert actually scripted a campy film, Beyond the Valley of the Dolls, for the legendary Russ Meyer. The only reason I ever watched the movie was Ebert’s credit… but if you’re in the mood for some campy, hippy-period fun, it’s worth a tub of popcorn. I’ll probably be digging that one out in the next couple weeks, as a strange, yet fitting memorial viewing. It’s not art… but it’s entertaining.

I always wanted to go to one of his annual  film festivals held back down in Champaign-Urbana, IL at our alma mater, the University of Illinois, but never did. Now I really wish that I’d found time.

I didn’t always agree with him, but I always respected him. He was an icon for the world, but he was really an inspiration to us newspaper folk back here at home in Chicago.

Today is a sadder day, without his sometimes funny, sometimes warm-hearted, sometimes acerbic take on the world of cinema.

Right now, I think I’m going to go watch a movie on my big screen in the basement. And at the end, I’ll be giving it a Thumbs Up or Thumbs Down that I suppose only Roger will see.

There’s only one review you can give for his life.

Thumbs Up all the way.

I will still always “see you at the movies…”