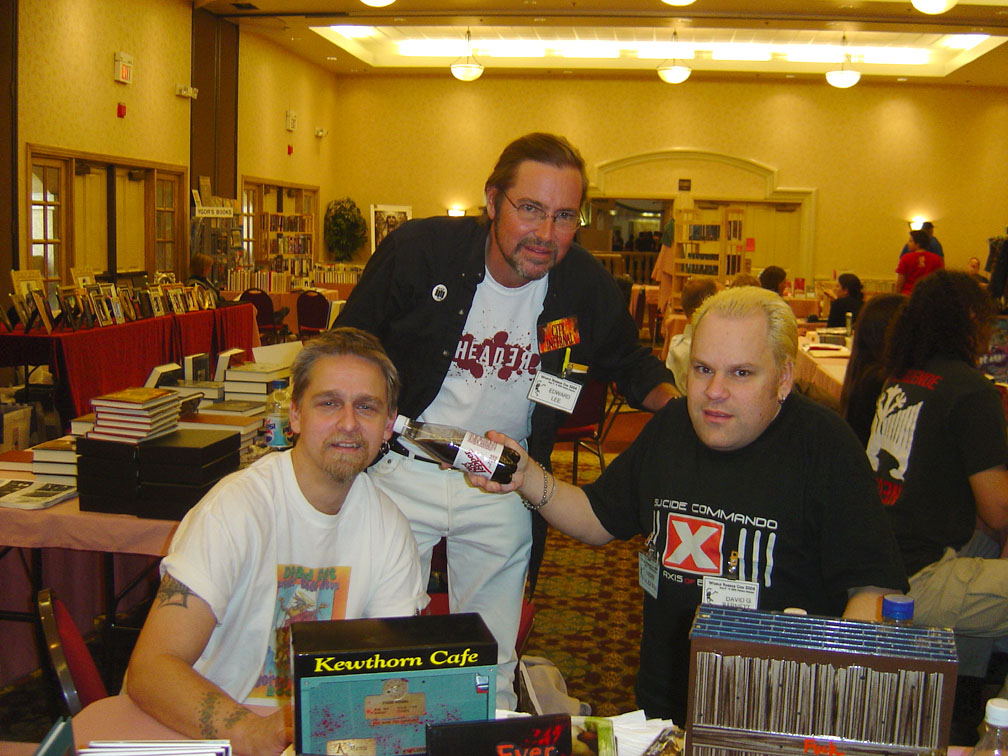 IF YOU THOUGHT Kansas City’s World Horror Convention in 2003 seemed the quietest WHC, then you weren’t in Phoenix.

Oh that’s right, of course you weren’t. Nobody was!

OK, that’s not strictly true. Some of us were. But this was the poorest attended con of any I’ve been to, and it showed. Programming was sparse, and standard WHC events like Editor Pitch Meetings, Loren Rhoads‘ Morbid Curiousity Open Mic and even the Gross-Out Contest were not on the schedule when I arrived (the Gross-Out was hastily reinstated at the demand of attendees, but it was over in an astoundingly fast 45 minutes). 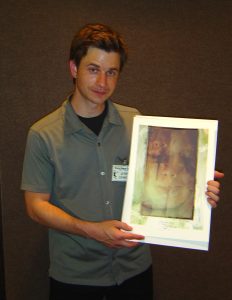 Since many of the usual suspects didn’t turn up, I did get the chance to meet and talk with a number of authors who I’ve never gotten to spend time with at past cons, which was cool, as well as with GAK and Rain Graves, who didn’t make it last year.

It was great to have the time to meet and/or catch up with artists Caniglia, R. H. Phister, Deena Holland and Jeanette Thompson, as well as writers Michael Arnzen, Matthew Warner, Sephera Giron, Christa Faust, Maria Alexander and more.

And, as usual, I spent lots of time at the Necro Books table in the dealer’s room with Dave Barnett, Edward Lee and GAK and

at the Borderlands table with Alan Beatts, Jude Feldman and Cary Heater.

Following are a few of the highlights (and lots of photos) from my perspective:

Apparently American Airlines pumps pollen into its air recycling system, and while I was fine when I boarded in Chicago, by the time I got to Phoenix, I was a wreck. 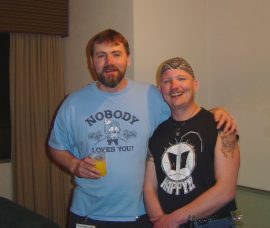 I was supposed to be on a “Common Mistakes In Writing Horror” panel almost as soon as I walked into the hotel, but instead, I had to go to my room, pop some Benadryl and lay down for a bit before I could raise my head without expelling my mucous membranes to the world. I did catch the end of the panel I was supposed to be on and saw that Ramsey Campbell had stepped in to take my empty seat – the audience was definitely better off!

Dave Barnett, Ed Lee and I caught dinner a couple hours later, and experienced the worst crawfish etouffee and babyback ribs ever (ribs should not have the skin CRUNCH when you bite into them. Nor should they have the consistency of thick stringy bubblegum).

Lee’s popcorn shrimp appeared edible, but we pledged that the rest of the weekend’s food would be of the sandwich variety.

Thursday night was an early one; after Opening Ceremonies, Dave and I talked with Lisa Jean Bothell and then compared notes on desktop design and publishing with Jeremy Lassen of Nightshade Books outside on the expansive hotel patio. 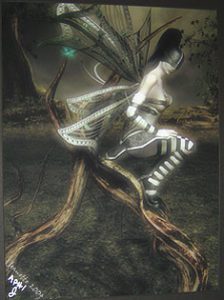 Friday I checked out the Art Room and realized that Phoenix had gathered the best show I’ve seen in years in terms of art. I knew immediately that I was going to pick up more pieces than I did when the con was on my home turf a couple years ago (and art was easily tossed in the back seat of the car, instead of painstakingly plane-ridden home).

After staring one too many times at a piece called “Deep Forest” by Jeanette Thompson, I decided to bid on the piece (the first time I’ve done that at an art show – I usually just buy prints!)

The nice woman who told me how to fill out my bid sheet turned out to BE Jeanette Thompson (I ended up losing the bid, but bought another copy from her after the convention anyway). We talked for quite awhile before catching a panel on “An Author’s Innermost Fears” featuring Rambo creator David Morrell as well as Ramsey Campbell. 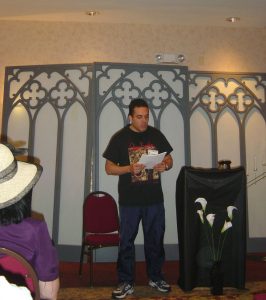 Then I headed out to see longtime horror-pal Michael Laimo do a reading.

Late in the afternoon, I was on the “Nuts and Bolts of Running A Small Press” panel, which was funny because I don’t actually run a small press – though I work for a lot of them. I was on the panel as the “nut” according to Matt Schwartz, since I do proofreading for Necro Publications, Earthling Books and have done Web design and editing work for Twilight Tales and Delirium Books. As it turned out though, the only actual publisher to show up for the panel was newcomer John Edward Lawson, of Raw Dog Screaming Press. We pulled Jeremy Lassen of Nightshade up, and with his help turned the panel into a true nuts-and-bolts information-packed session on the dos and don’ts of running a small press. 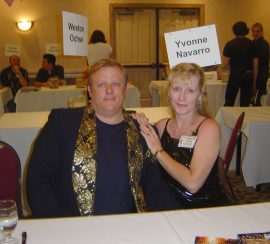 After fielding a couple margueritas at the hotel bar’s free happy hour, I took up residence at the lobby piano for a bit to relax, and then hooked up with a group including Dave Barnett, GAK and Anne Laymon for dinner.

But by the time we were finally to be seated, it was only 15 minutes before the Mass Autographing, so I ended up skipping food and heading to my room to grab some books. At the autographing I was flanked by Christopher Treagus, Bill Gagliani, Maria Alexander and Christa Faust, who explained the finer points of knot tying. 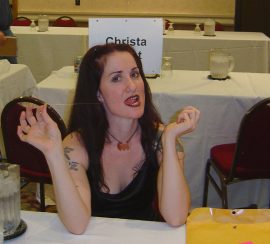 After the autographing (where I did manage to sell a few books), it was off to the Shocklines Press party where Caniglia and Dave Barnett’s books were feted, followed by the Borderlands party, where somehow the majority of the night disappeared in various conversations.

After talking for some time with Sephera Giron, I noticed her watch said 5 a.m. and I quickly excused myself to try to find sleep before first light.

Somehow I managed to get up in time to score some free breakfast and chugged plenty of coffee to try to resusitate my vocal chords in time to do my 1 p.m. reading. 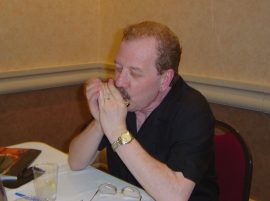 As it turned out, I needn’t have worried too much…only a couple people turned up, one of whom – Tony Richards — I’d met the night before at the Borderlands Party thanks to the memorial Dick Laymon “introduce yourself to someone you don’t know” moment. Tony liked my readings of “Anne’s Perfect Smile” and “Vigilantes of Love” enough that he bought a copy of Vigilantes of Love from me after the reading. (Thanks Tony!) 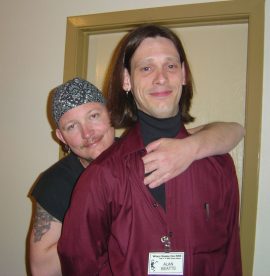 After my reading, I stopped at the Art Show to find that I’d been outbid on the “Deep Forest” piece by $25, but Jeanette offered to make a print for me when she got home (which now hangs in a gorgeous silver gothic frame in my office.)

I caught some of “Media Guest of Honor” Dee Snider‘s talk about his rise from the heavily costumed frontman of Twisted Sister to the leader of a Halloween rock orchestra outfit called Van Helsings Curse, as well as his roles as a screenwriter and director of the S&M low budget horror flick Strangeland. A showing of the film followed his talk, which turned out to be more interesting than the movie; I went next door and caught an evocative reading by Maria Alexander from a piece she has due out from Circlet Press.

I took another turn at the piano during Happy Hour, talked a bit with Michael Laimo, Rain Graves and Beth Gwinn before catching dinner again with Dave. This time I stuck with sandwiches.

I caught the end of the Artists Reception, where I bid on another piece (this one called “The Deathbird,” a painting by Grant Fuhst, who I’d bought a print from last year). I also bought prints from Alan Clark and Caniglia, which the artists graciously autographed. 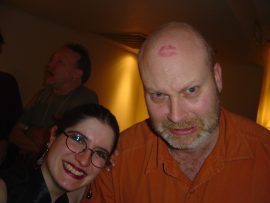 I caught a great reading by the ever-amusing Adam Pepper and watched Edward Bryant and David Morrell have fun MCing the IHG awards, where most of the awardees were “in absentia,” and then took in the Leisure Books party for a bit before heading to the Gross-Out Contest.

Unfortunately, by the time I got downstairs, the last reader was already finished with her piece, and one look at the brown-spattered Joe Konrath (the remains of a fictional colonostomy bag, ahem) gave me a pretty good indication of who was going to win.

Back to the Leisure party, which quickly wound down, and by 1 a.m., conventioneers were left without a place to chat the rest of the night away, as we had the evening before thanks to Borderlands. 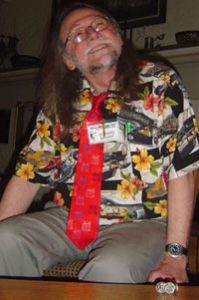 A good mob of us, including Matthew Warner, Deena Holland, Chesya Burke, Simon Wood, Mikey Huyck, Robert Walker, Christopher Treagus, a mysterious girl whose badge said Sarurday and more ended up by the pool and then the patio…and then ultimately in the abandoned hotel lobby bar, where I talked a bit with Alan Beatts and discovered Talebones’ Honna Swenson and Edward Bryant, among others, competing in a game to stand the most coins on-end on a table.

I was happy to balance one. Confident in my last remaining balanced faculties, I acquitted myself of the bar around 4:30 a.m. 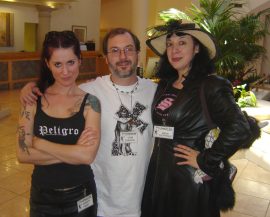 After a bleary eyed breakfast, I checked in at the WHC Board Meeting, and then spent a couple hours in the dealer’s room saying goodbyes and making final purchases.

Then it was off to the lobby, where I found Kevin Murphy, Christa Faust and Maria Alexander discussing the merits of the latest Living Dead flick and the demerits of House of 1,000 Corpses.

Feo Amante snapped a quick pic of me with the ladies, and Maria and I headed off to the airport.

It was a bittersweet leaving, as always. And this year there wasn’t even the sure promise that we’d all do this again next year…at the WHC Board Meeting, it was announced that an acceptable formal bid for next year’s con had yet to be received, though a couple informal ones were in the works.

Postcon note: several weeks after WHC2004, it was announced that New York had won the bid for the 2005 WHC.