AS USUAL, I’VE LET nearly half a year slip by without writing here. Not that a lot hasn’t gone on. I recently had the (?) pleasure (?) of spending eight days in San Diego on business, and arrived just about a day before the worst brush fires in San Diego history broke out. One night I went to bed and everything was summery and fine, and the next morning when I left my hotel, the sky was grey-orange, the air smelled like the inside of a chimney and the streets were covered with a fine layer of ash. It made for a surreal week!

The summertime seemed devoted to home repairs (had all the siding replaced and the bathroom renovated). But I also wrote a couple of long-ish pieces. “The Green, Green Glass of Bone” was written and accepted for the Necro Publications‘ Damned anthology, due out early in 2004. And I also spent a lot of the latter days of summer working on a new horror-dark fantasy piece, “The Char-Lee,” which ended up clocking in at over 11,000 words. I’ve also been busy doing initial reads for Spooks, the next anthology from Twilight Tales, which I’m co-editing with Tina Jens.

Haven’t had a lot of things hit print lately, but one of my favorite pieces, written a couple years ago, did come out at the end of the summer. “Spirits Having Flown” was published in the Karen Joy Fowler-edited anthology MOTA 3: Courage, from Triple Tree Publishing. It’s a well-done literary fantasy anthology that I highly recommend.

Shocklines created a John Everson store this summer, so now you can order anything of mine currently in print – be it in a magazine, anthology or one of my books – from the same place. Check it out! 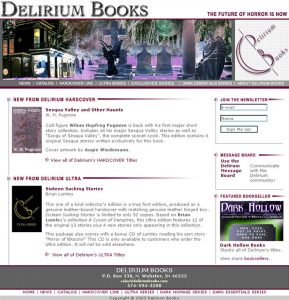 Looking forward…I’m hoping that 2004 will be a fresh new year…it seems that I’ve spent a lot of 2003 polishing and archiving my various works of the past 15 years. In the Spring, I completely revamped both my johneverson.com and popstops.net music column Web sites (the column celebrated its 15 year anniversary this summer). I also spent much of August doing a redesign for Delirium Books (I was just itching to be Web-creative, I guess).

Earlier this fall, I spent a week closeted away in the Wisconsin North Woods in order to re-edit my first novel, Covenant (formerly under the working title The Cliff), so that it would be ready to come out on Delirium Books next year. I actually finished the first draft of that book about five years ago and got halfway through a sequel last year.

I spent last weekend recording all my old song demo tapes from the ’90s to digital format, so I could archive nearly 100 music tracks created over the past 15 years onto CD  (You can hear a couple on my Music page). And this week, I converted all my old “dark music” review columns from Wetbones, Talebones and Midnight Hour to HTML to archive on this site (see Articles).

So I’ve dwelt enough on sorting and archiving the past…it seems to be about time to look ahead! Here’s to 2004!