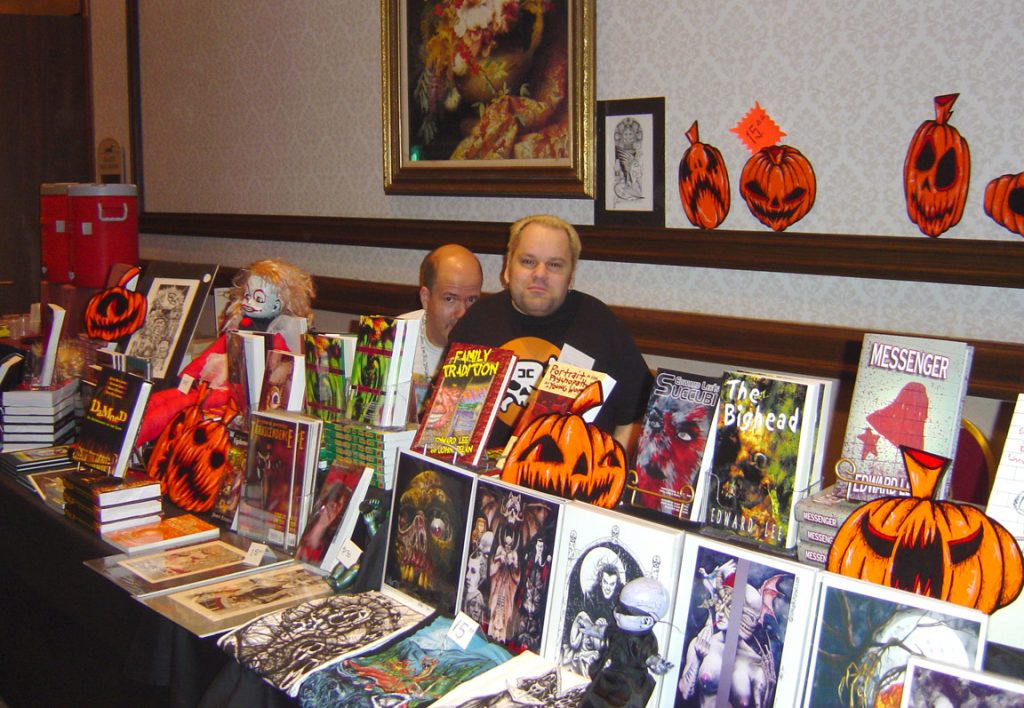 UNCERTAINTY. DESIRE. INDECISION. That’s the framework for my Horrorfind 2004 experience, and the reason I ultimately went to the con but didn’t register in time to participate in readings or panels.

I’ve wanted to go to the con the past two years, but work commitments always intervened. This summer though, I finally had an opening to go…but various things kept me hedging ‘til the end. I know. Standard male schtick. Can’t commit.

I couldn’t use my frequent flyer miles for the trip. I was worn out ‘cuz I was in Denver on business just a few days before (which I managed to turn into an excuse for hooking up with CyberPsycho’s AOD editor Jasmine Sailing and entourage – we had an excellent night at a bar with no name. Literally).

Anyway, at the last second, I booked a flight and a con pass to Horrorfind and took Necro Publications publisher Dave Barnett up on his offer to sleep on his hotel room floor. Literally. Frankly, it’s surprising how comfortable a floor is with a couple thick comforters and a pillow. I haven’t done this since college. Did I even do it then??? I don’t remember. 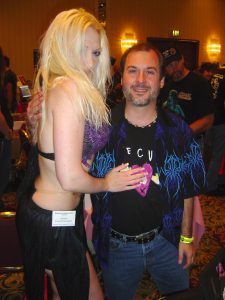 So I arrived in Baltimore on Friday afternoon and shuttled the 45-minute ride to the remote hotel with the amazing Jeff Funk (this guy has proofed the same books I have for Necro, and he composes orchestral music to boot!). After stumbling across con producer and ever-affable Brian Keene and finding the secret entrance to the unopened Dealer’s Room, I scored my room key from Dave and stowed my shit before the Dealer’s Room was mobbed by throngs of East Coast horror fans.

I did a brief foray of the main dealer’s area, which was chock full of horror-oriented t-shirts, DVDs, sculptures, books, etc., talked with Jack Passarella and Gene O’Neill and then hung with Dave and GAK at the Necro table until dinner. 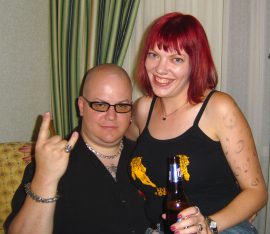 Hoarding cheap beer, we adjourned to the bar for a couple hours, where we met up with Chad Savage.

We learned that proper anticipation was the key to successfully negotiating the hotel bar.

About 20 minutes before you might become thirsty, you should begin the process of trying to place an order…then you might be fulfilled.

After the bar closed and kicked us out to the lobby, we headed to room parties…as we were walking down the hall en route, we were roped into someone’s room (none of us knew who) rather than the Keene-fest room we were headed to. 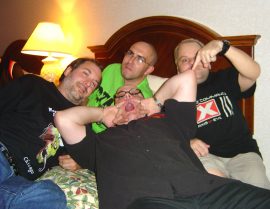 It was a strange experience, and Chad scored a beer, before we slipped back out and found the real center of excitement…but while Bel got a brief photo op on Chad’s lap, and Keene propped up next to Dave, Chad and me for a bed photo (Tim Lebbon was lurking around somewhere too), we soon found ourselves out in the hall again as Brian had to be up and green-shirted to run the con by 7 a.m. (it was after 3 by then.)

I soon discovered the amazing comfort of hotel floors as Chad found that a rollaway bed is less desirable than a mattress of gravel, and the con was on!

Dave and GAK seemed to sleep easy on the hotel beds and were up and manning the Necro table a couple hours before the two interlopers could rouse themselves from uneasy drunken slumber.

Saturday was a maze of blur.

Breakfast managed to ground my vision somewhat just before noon, and after viewing the Evil Dead museum, courtesy of effects artist Tom Sullivan, I toured the dealer’s room again, bought some trinkets, met horror and fetish model Cali Ford (a member of my Yahoo fan club list) and caught a couple readings, including one by the always amazing Joe Lansdale. 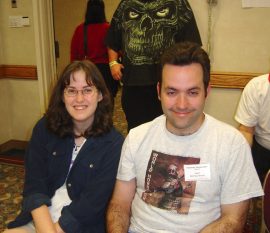 I also chatted with Gene O’Neill, met Black October editor John DiDomenico, who I’ve corresponded with for years (he published my story “Preserve” in Vol 1, issue 4), author Jack Ketchum, and agent Jane Letty. She seemed amused by my idea of lunch being encapsulated in a Bloody Mary (hell, it has tomatoes and celery…it’s like a salad!).

I also walked through the “celebrity room” a couple times, talking with B-movie horror actresses Debbie Rochon and Brinke Stevens, snagging a picture with Re-Animator star Jeffrey Combs, and sneaking a picture of The Fog star Adrienne Barbeau and Night of the Living Dead director George Romero.

I did the latter from across the room, since I just couldn’t fathom standing in a line that stretched out of the room and down a hallway just to say hi up-close with him. 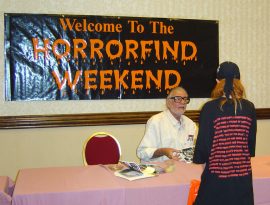 Dave, GAK and I agreed that Saturday dinner should be a more formal affair, and tried to hook up for a big table at the restaurant with Bel, Dave, GAK, Gerard Houarner, Linda Addison, Alan Clark and others, but somehow the reservation didn’t get large enough, and Dave, Bel and I ended up at the abutting “kiddy” table…

…which meant that we completely missed the costume ball since dinner at the “abutment” table for some reason stretched to a ridiculous 2.5 hours.

GAK patted our shoulders in faux consolation as he left the restaurant an hour before we did, despite having sat at the same time.

Much like our experience at World Horror in Phoenix, dinner wasn’t worth it…Bel nearly choked on her Oysters Rockefeller, I soon learned that clamcakes aren’t appropriate stomach lining for a night of drinking, and Dave found out in the midst of dinner via his cell that his roommate’s new house was nearly trashed by a hurricane and Orlando as a whole was without power. Grist for a bad night of cocktails.

At some point, we talked with Ed Lee in the bar, Bel and I went to someone’s car with Keene to hear an original metal band fronted by a con staffer on the ster

eo, and the two of us also chatted with Mike Laimo for a bit outside on the entryway to the hotel. Then I hooked back up with Dave and GAK in the lobby. Things get blurry for me after that. 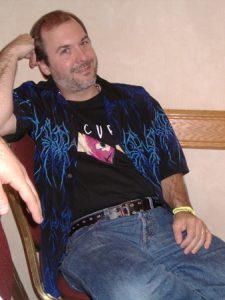 I painfully smacked down some waffles while listening to The Horror Channel guys at the table next to mine patting each other on the back about how their con-induced deal with guest-of-honor George Romero was going to be the ultimate coup for the cable channel. Then I caught a couple twisted fiction readings from Mark McLaughlin, Alan Clark and an amazingly disgusting goat cheese story e-mail pal Elizabeth Blue (at last I got to meet her!), before making a last round of the dealer’s room, taking a swollen-eyed picture with Dave and Bel (she won’t let me display it, though I look worse than her), meeting up to chat briefly with Cemetery Dance editor Richard Chizmar and finally heading to the airport.

Here are a few more pix from the weekend: 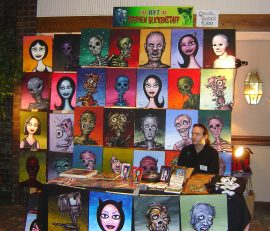 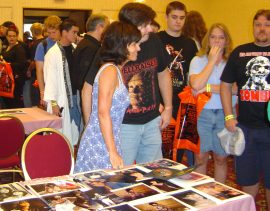 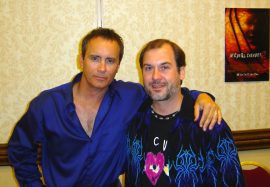 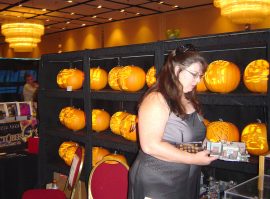 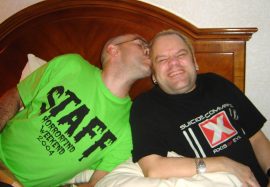 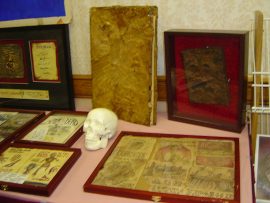 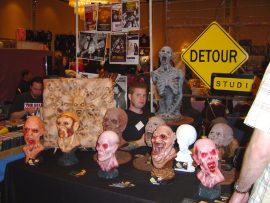 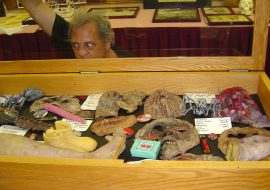 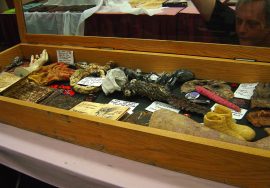