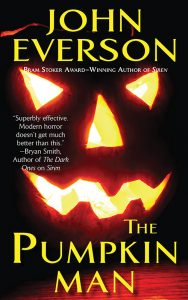 Every year, I try to offer some kind of free story for the holiday, and this year, I’ve gotten permission from the publisher to post, at least for a short time, the short story that inspired my fifth novel, The Pumpkin Man.

Originally written back in 2006 as a story for me to read at library appearances and other public events during Halloween, the short story called “The Pumpkin Man” was eventually printed in Doorways Magazine in January 2008 and is due to be reprinted next year in a major anthology from Wicker Park Press —  All American Horror: The Best of the First Decade of the 21st Century — edited by Mort Castle.

Just go to johneverson.com/thepumpkinman-horror/fiction-the-pumpkin-man.html and look in the left hand column navigation. The link to read the short story “The Pumpkin Man,” as well as a link to my Halloween story “Pumpkin Head,” are both there. Hope you enjoy the free fiction for the season!

While you’re on the site, please click the little Facebook “Like” button… I’m hoping to expose as many new people to my fiction as possible this Halloween season. 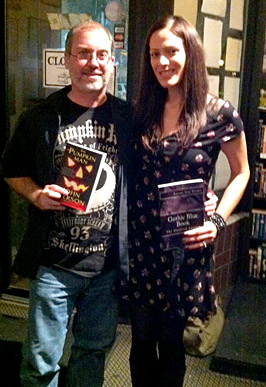 I know a bunch of you wanted to come out to my Chicago “Launch Party” for The Pumpkin Man on Friday night – sometimes I wish the United States wasn’t quite so large! It was a fun time filled with Newcastle, Vanilla Porter and a box of wine… nevermind the Halloween candy and awesome fiction!

There were several authors there who contributed to the Gothic Blue Book anthology, and I read my story that is included in the book — “The Tapping.”

I also read the prologue to The Pumpkin Man and I threw a video camera out front to record the reading, so I’m hoping I can turn the footage into something watchable; if so, I’ll post it on johneverson.com/thepumpkinman-horror/.

Huge thanks to Bucket O’ Blood Books and Records owner Marc Ruvolo for hosting the dual launch party and doing a really cool reading himself, and to Gothic Blue Book editor Cynthia Pelayo (pictured)  for staging the event and bringing her “posse”!

It’s been a pretty packed October for me, between a 20-date “Blog Tour” (if you include this post) and a couple of live signing dates. If you missed them and want to check out the blogs, just visit The Pumpkin Man website and look in the left column. Links to all the blogs I’ve visited are there. And if you want to enter the contest posted on the site… you’ve got just a few hours left – the cutoff is 6 p.m. Central tonight.

This is my favorite holiday, and I want to thank all of my friends and readers for sharing it with me — I hope my stories have brought you the occasional “creepy” feeling that I used to get when I read ghost and horror stories. I write because I wanted to give readers the same feeling other authors gave me. So, thanks for reading, and I hope you have a great, ghoulish holiday.

As for me? I carved jack-o-lanterns last night — two of them based on my 6-year-old son’s drawings. He’s quite the artist  — and I’m looking forward to Trick-Or-Treating with him today. He’ll be dressed as an Angry Bird. I just have a silly skull mask. I also cooked up a batch of salted pumpkin seeds, thanks to our pumpkin carving. I tasted a few of them fresh from the pan in the oven last night…all I can say is… mmmmmm! Those are going to go quick.

Over the weekend I tried to work my way through the Nightmare on Elm Street movies. Believe it or not, while I’ve seen bits and pieces, I’ve never actually sat and watched any of them all the way through before. And a few months ago I bought a DVD that has the first four movies. So I’m getting my Nightmare education. Last night I watched Dream Warriors, but fell asleep midway through it. I guess I’ll need to find where I zonked off tonight and finish that one instead of moving on to Nightmare #4! If nothing else, I’m enjoying the ’80s hairstyles in these movies! They’re a Halloween costume all by themselves.

I hope you have a great Halloween.