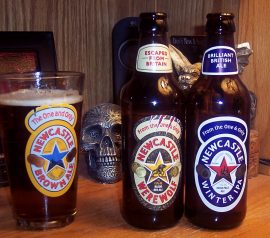 SO I HAVE TO SAY I was pretty disappointed this week to learn that the new Newcastle seasonal brew — Werewolf “Blood Red Ale” — wasn’t manufactured in enough quantity to last through Halloween. I mean… shouldn’t you drink a Werewolf next weekend?

Not unless you hoarded some away in the fridge. Chicago stores are all out of it. On a plus note, Newcastle’s (also new) Winter IPA hit this week… and it’s pretty drinkable! (click the photo for a larger view of the labels)

Something else that hit this week? The Kindle e-book edition of my 5th novel The Pumpkin Man.  The trade paperback edition hit stores a couple weeks ago, but now you can download it to your Kindle too.

Just in time for Halloween (and this one WON’T be out of stock for the holiday!)

This weekend, on Saturday and Sunday, I’ll be in Cincinnati (actually, across the river in Newport, KY) doing a couple booksigning stints at the Barnes & Noble on the Levee. If you’re in the area, I hope you’ll come out! I’ll be there from 7-10 p.m. on Saturday night and from 12-3 p.m. on Sunday afternoon before I hit the road back home. There will be plenty of copies of the trade paperback of The Pumpkin Man, and there should be some copies of Siren available as well.

I’ll actually have my hometown Chicago launch party for The Pumpkin Man next weekend, on Friday, October 28 at Bucket O’ Blood Books & Records. I’ll be doing a reading from the novel (I think, accompanied by some music!) and there will also be a launch for the Gothic Blue Book anthology, which also happens to include a story of mine (“The Tapping”). The store recently got a write up in Huffington Post – and even mentioned the book launch event! (Check the article here).  If you’re in Chicago, come on out — I’m buying a round at Revolution Brewing just down the block afterwards. It won’t be Newcastle Werewolf, but their Working Woman Brown Ale is pretty tasty. 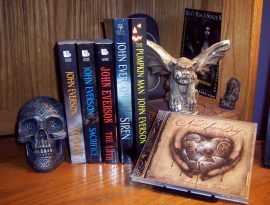 If you’re not in Chicago or Cincinnati over the next two weekends, check out my blog tour in support of The Pumpkin Man. I’ve stopped at a bunch of blogs already, and have several more lined up for the coming week. I’m running a contest for people who visit the blog stops, as well as for those who just drop in to the new website devoted to The Pumpkin Man — The grand prize is signed copies of all five of my novels, as well as an autographed CD and poster from the band New Years Day, who provided the soundtrack for The Pumpkin Man website. Check out the site and contest here:

The Pumpkin Man site is part of the “Coffin Hop” blog tour next week (if you want to win Halloween stuff, you’ve got to follow the hop!)  Here are the links for my completed and upcoming Blog Tour stops:

October 26 – Curling Up By The Fire