The Pumpkin Man is here! 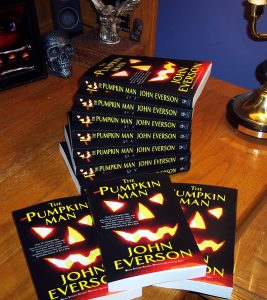 IT’S OCTOBER, and that means… The Pumpkin Man is coming!

Actually, The Pumpkin Man is here. You can see it on Amazon, Barnes & Noble, Dorchester, etc.

I received my copies of the trade paperback on Friday, and they look great! My fifth novel started shipping to bookstores early last week, and went live on Amazon and other online stores on October 4th; it should be on-shelf in the major chain stores this week.

The e-book edition will also become available this week. In fact, I’m going to ask all of my fans who buy e-books to “gang up” and purchase the e-book edition this Saturday, October 15. It should be available online everywhere then, and if a mass of people all purchase on the same day well… that will create some great rankings, which in turn will get the book exposed to more people.

But in the meantime, today I launched my Blog Tour in support of the book. Horrorbid.com has posted an interview with me today. 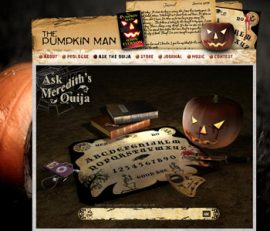 Later this week, I’ll be guesting at HorrorWorld, Dorchester and Fang-Tastic. You can follow the blog tour on the new micro-site dedicated to The Pumpkin Man, which also just launched.

The new site features an interactive Ouija Board — so check it out, and ask the dead some questions, if you dare!  If you click the iPod on the Ouija Board, you’ll also hear a song from New Years Day, a cool new band who  partnered with me and the awesome developers at Headcake Media  to develop the site.

I’m also running a contest through the site with a variety of prizes — including a grand prize that includes autographed copies of ALL of my novels.

So stop in at johneverson.com/thepumpkinman-horror/ now and check it out. And please share the site on Facebook and Twitter. I really want to get the word out to horror fans everywhere over the next two weeks. Because… it’s October. And…

The Pumpkin Man is here!