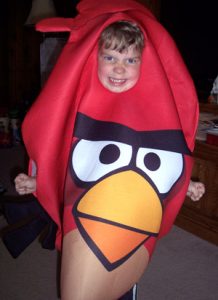 TODAY WAS HALLOWEEN, one of my favorite days of the year, since everyone celebrates the “strange” in their own ways.

I took a day off work today, mainly so that I could go Trick or Treating with my son Shaun, the ultimate “Angry Bird.”

When 4 p.m. came, we headed across the neighborhood to hook up with a couple of his friends and began to canvass the area houses for treats.   I wore a monster mask as we walked the neighborhood, and we had an energetic discussion about who would trump who – the monster, or the Angry Bird. I’m sure we would disagree on who won that argument.

We had a great time and accumulated a great deal of candy before finally returning home two and a half hours later. (So great, in fact, that I had to hold some of his candy in my coat pockets because his Trick Or Treat sack was too heavy for him to carry!) 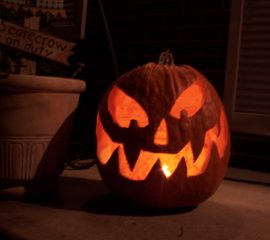 Once we stashed the candy, we put our lit pumpkins outside of our own house, but a bit late — I’m afraid we missed the trick or treaters.

The doorbell never rang after we were home.

It’s just not like when I was a kid and we stayed out until 8 or 9 p.m. filling our bags with candy with the hope that the sugar treasure would last us the next six weeks.

After dinner, I printed and cut out a ton of contest entry slips, and then Shaun helped me draw the winners for The Pumpkin Man Halloween Contest (which I’ll post just as soon as I confirm all of the winners… I’ve already had one of my e-mails bounce back).

The contest has been going on all month, and offered a bunch of e-book prizes, as well as a Grand Prize of signed copies of all of my novels. 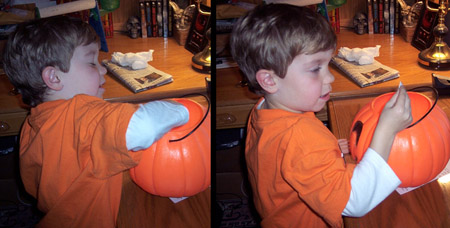 All the entries to the contest (nearly 350!) were identified for the drawing simply by printed numbers, but as you can see, Shaun was very good about keeping his eyes closed as he pulled the numbers from “The Great Pumpkin” to identify our Grand Prize, First Prize and Blog winners. Thanks to everyone for entering the contest!

Congratulations to all the winners (some of you already know who you are!), and I hope everyone had as fun of a Halloween as I did!