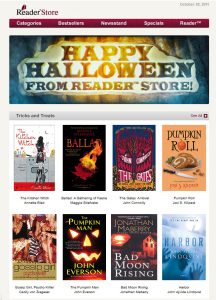 YESTERDAY THE SONY e-Bookstore sent out an e-newsletter promoting Spooky Reads for the season, and I was psyched that they featured The Pumpkin Man. It was especially cool since they placed it right there next to a Jonathan Maberry novel (and Jonathan gave me a great blurb for the novel).