Home News The Road to Halloween

The Road to Halloween

UNLIKE LAST YEAR, this Halloween season I didn’t focus as much on doing readings and appearances, though I did drive up to Milwaukee on Oct. 20 for a Barnes & Noble author panel (more on that below), appeared on Oct. 25 for the third year in a row as the “Halloween” guest in The Writer’s Chatroom and on Halloween night, I’ll actually be doing my one live fiction reading for the month — Bill Breedlove, Martin Mundt and I will all be performing at 7:30 p.m. on Oct. 31 at the Red Line Tap.

My real focus this season, instead of making the rounds in-person, was on promoting via the Web. I’ve gotten the word out to nearly 2,500 people who’ve joined my list on MySpace about the free distribution of “Pumpkin Head” and hopefully, interested some in my books. It’s taken up an awful lot of hours at night this month to respond to people, but I’ve gotten scores of emails and posts about the story; I think more people have read it this year because of my MySpace page than in the four times it’s been printed in books and magazines!

Because of the promotion, I was interviewed by Denise Kaminsky for her Interviews and Media News site, covering everything from what I grew up reading to my most recent book projects, from Candy to Failure to Sacrifice. 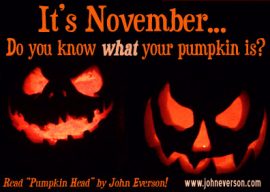 And the FreakForum did a special Halloween edition podcast show that includes a live performance of my story “Pumpkin Head” by host Henrique Couto, complete with sound effects! The story appears right around the 1-hour mark of the program, which you can Download directly to your computer to listen to.

In addition, the CountGore Dungeon listed the “Pumpkin Head” short story page as its Bizarre Site of the Week yesterday, and the nice folks at the Horror Yearbook posted my “Pumpkin Head” promo banner (at right) as a free ad. And both www.deadpit.com and www.crowgrrl.com have expressed in reviewing Candy in the Dumpster.

In the end, I’m not sure that the effort has sold dozens of books, but it has moved as many as last year’s “Library Tour” did, and it has also introduced me to some interesting new friends and fans!

Last Friday night, Bill Breedlove and I headed up to the Milwaukee area to participate in a panel on writing horror and thrillers at a Wauwatosa, WI Barnes & Noble.

While the store did zip to promote the event (they didn’t stock most of our books, list the event on their web site, or even put signs in the store noting where we were (we were upstairs and off to a side…so there’s no way most people in the store even knew there was an event going on!), we still had more than 30 people show up, and despite the store’s apparent disinterest, we all had a great time. Photos below courtesy of Dave Benton. 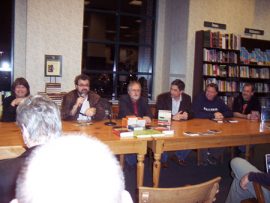 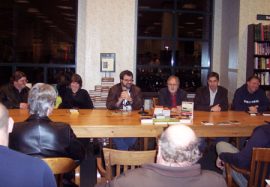 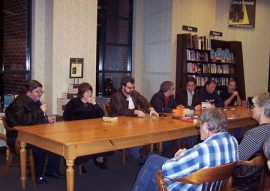 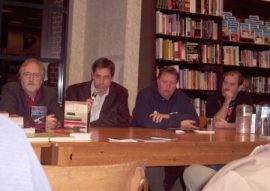 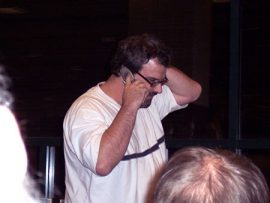 Probably the best part of the night for me though, was having Bill introduce me to “The Brat Stop,” a fine Wisconsin venue that combines a deli, a bar, a live-band stage, a restaurant and…did I mention a bar? The brats are worth stopping for (and the jalapeno poppers ain’t bad either!)