THE LAST TIME I posted, it was May…and it doesn’t seem that long ago. So where have I been? Well…after I got back from the World Horror Convention a few weeks ago, my wife and I put our house up for sale and decided we were off to bigger and better things. Only trouble is….we haven’t gone anywhere…it’s a dead house market in the Chicago burbs right now, and we’re still sitting at the same address 10 weeks later! We’ve looked at lots of houses we wanted to buy this summer, and I’ve done lots of minor fix-it projects to put this one in shape so it would sell…And all of a sudden, here it is, the end of the summer and not much has really changed (well…our house is a little cleaner).

In any event, the summer of 2006 for me has been pretty much focused on houses and playing with my son Shaun. No exotic vacations for me, I’m afraid…though next week I’ll be off on a business trip to Boston, followed a few weeks later by a trip to San Francisco. And then it will be almost time for my favorite holiday…Halloween!!!

But for those looking for new stories before the haunting season, there is good news on the John Everson fiction front to report…including a new Polish connection! Check it out:

Candy in the Dumpster gets rave reviews! 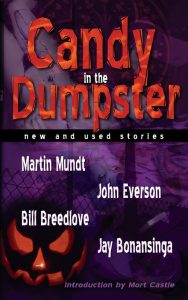 Candy in the Dumpster, a collection of 12 “new and used” stories from four Chicago horror writers — Jay Bonansinga, Bill Breedlove, John Everson (er…me) and Martin Mundt, has gotten some great reviews over the past few weeks since its release. While Jay has been working on an independent film this summer, Marty, Bill and I, along with Mort Castle, who penned the introduction, appeared at the World Horror Con in in San Francisco in May and at Chicago’s Printers Row Festival in June to promote the book. You can get the full scoop on Candy at www.darkartsbooks.com.

Dread Central called Candy “One of the best collections of the year by four remarkably warped individuals. ..” And Issue #14 of Horror Fiction Review says “Candy in the Dumpster is a best bet for fans who like horror stories with bits of sick humor thrown in…” You can read the full reviews of Candy in the Dumpster at:
* MaximumHorrors.com
* DreadCentral. com
* Creature-Corner. com

In addition to the Candy in the Dumpster review, Maximum Horrors has also posted an interview with me about Candy as well as my books Covenant and Failure.

Fahrenheit #53 , Poland’s online magazine of sci-fi, fantasy and horror has published a Polish translation of my short story “The Right Instrument” which also appears in my dark fantasy short story collection Vigilantes of Love. If you can read Polish (I can’t!) check it out in issue #53.

New stories coming in anthologies about WW II and Kolchak: The Night Stalker

Earlier this year, I wrote stories that will appear in two anthologies due to be released this fall:
My story “The Devil’s Platoon” will appear in an anthology from Silverthought Press called A Dark And Deadly Valley. The book is a collection of “alternate history” horror stories revolving around the World War II and will also feature stories from Gary Braunbeck, Brian Hodge, Brian Keene, Rick Hautala, Mort Castle, Scott Nicholson, Weston Osche, Harry Shannon, Bev Vincent and many more.

My story “The Strange Events at Vishnu Springs” will appear in Kolchak: The Night Stalker Casebook , an anthology of short stories set in the world of the original “Night Stalker” TV series. I’m really excited about this story — it’s an 11,000 word novelette, and I had a lot of fun writing it. I watched “The Night Stalker” every week while it ran on TV when I was a kid, and it made an indelible impression on me. So I was thrilled to be asked to participate in this project, and ecstatic when my story was accepted!