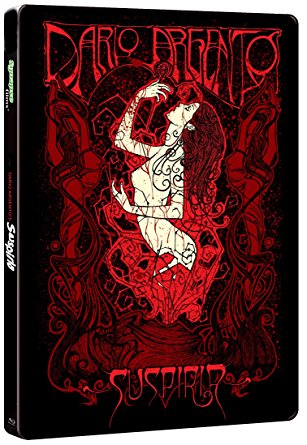 THERE HAS NEVER been a horror movie more beautifully shot than Suspiria.

There has never been a release of Suspiria more beautifully realized than Synapse Films’ 4K remaster of the film.

The film’s power has always been all about the color and the lighting, and the Synapse edition brings out the power of those elements like no previous release. The Blu-Ray is sharp, crisp and eye-poppingly colorful. Suspiria looks like it was shot using exclusively blue, green and red spotlights — everything about the movie is drenched in primary colors… and they’ve never been more vibrant than in the Synapse release.

But if you’ve never seen Suspiria, at this point you’re saying… okay, great, it looks wonderful but… what is it? What’s all the fuss?

Suspiria is a 1977 film by Dario Argento, an Italian film critic turned writer/director — in the late ’60s he helped with the screenplay for Sergio Leone’s Western classic Once Upon a Time in the West before making his name in the early ’70s directing a series of giallo films (murder mysteries with black-gloved killers that would inspire the later American slasher subgenre).  After he hooked up with actress Daria Nicolodi on his 1975 film Deep Red, his films began to grow more supernatural in scope (she’s credited with influencing that move) and she co-wrote the screenplay for Suspiria, which would become widely regarded as Argento’s masterpiece.

“Suzy, do you know anything about… witches?” 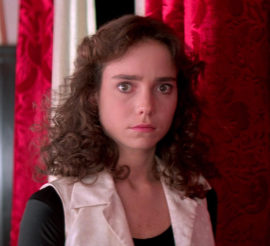 That question to Suzy mid-way through the film is the key to unlocking the heart of the film.  Because, there are dark and magical things going on in this ancient place that Suzy finds herself in. The story has a fairly simple premise… and in fact, a narrator gives us the setup in monologue over the opening:

“Suzy Bannion decided to perfect her ballet studies in the most famous school of dance in Europe. She chose the celebrated academy of Freiburg. One day, at nine in the morning, she left Kennedy airport, New York, and arrived in Germany at 10:40 p.m. local time…”

Suzy, (played with wide-eyed perfection by Jessica Harper), arrives at the German dance school late at night in the midst of a storm. In the opening scene, as she leaves the airport, we witness her move from one world to another… as she exits the terminal to find a taxi, the wind rips open the door and the rain outside blasts her with chaotic power. She has moved from the orderly civilization and lights of the airport, to the wild darkness that will shortly impact her life at the dance school. It’s a symbolic and visually striking crossover from her old life to the strange new place.

She even tells the cab driver that she’s going to Escher Strasse — a street named after M.C. Escher, the famous artist of impossible geometry. The film that follows is like an Escher drawing, filled with strange twists and impossible perspectives. It’s a maze not meant to be fully unraveled.

Once at the dance school (a wildly striking red building) Suzy is turned away at the door by a voice on the intercom just after another girl exits the school and runs out into the storm. When Suzy returns the next day, she finds that the girl she saw leaving the school in the storm has been murdered (in one of the most dramatic death scenes ever — she is stabbed and falls through a ceiling of stained glass to hang.) 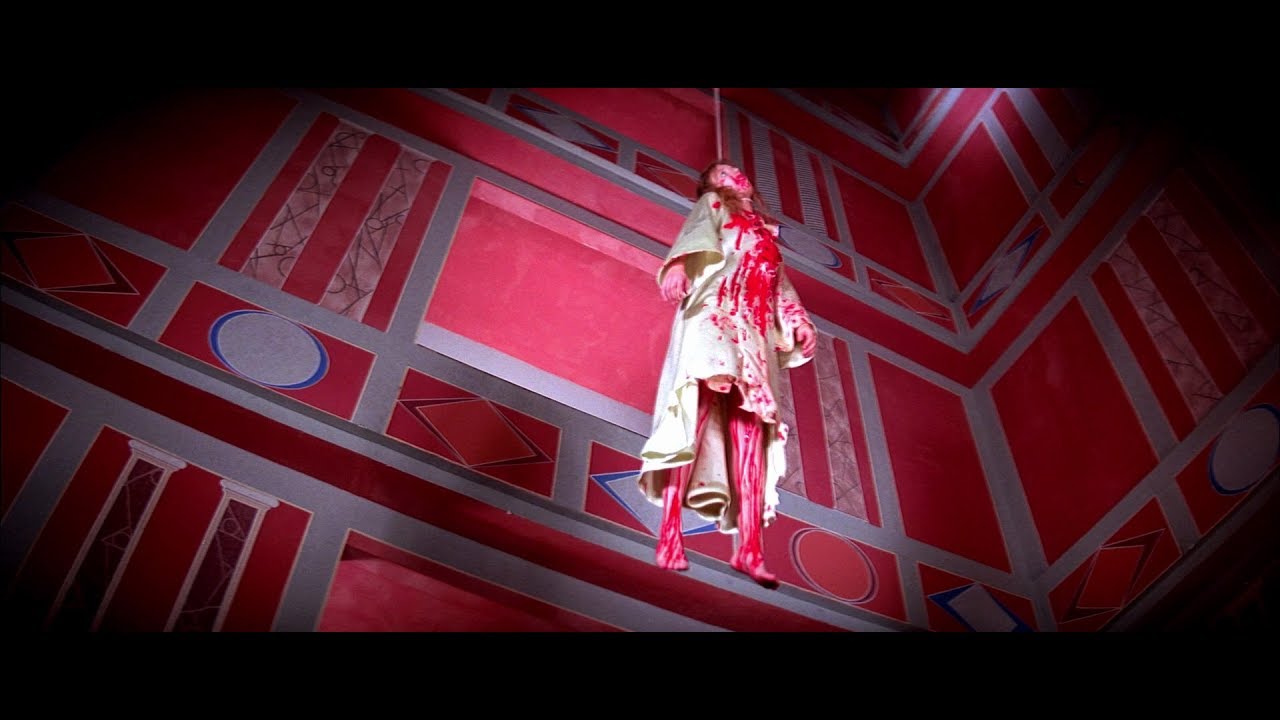 We quickly are introduced to bitchy, catty classmates, a seemingly sadistic head dance instructor and a “debutante” head mistress. And some dour-looking institution staff. While at first Suzy is told that she must room with a student off-campus, shortly thereafter, the headmistress wants her to return, having found her a room. When she rejects the offer, wishing to stay off campus with her new roommate, she finds herself under the “evil eye” of some of the school’s staff and soon she gets inexplicably sick and collapses. Her bags are brought back to the school and her independence is summarily ended.

After a creepy maggot scare (with the creatures falling into the girls’ hair from the ceiling thanks to rotting meat in the attic), the disappearance of her roommate and the death of a man who runs afoul with the dance instructor, Suzy realizes that she is being drugged to keep her in bed during the night. When she decides to thwart the drug and follow the path of the strange nocturnal steps in the hallways, she comes face to face with the dark force hiding at the core of the school.

Suspiria is ultimately a dark fairy tale (it’s said that Argento used the dark forest and witches motifs of Snow White as a model). From the garish lighting to the dramatic deaths to the witch at the center of the web, it’s a film that works not because of intricate plot, but because of camera angles and lighting and a sort of weird “dream logic” which cares more about making things look creepy than deeply explaining much about the “secret world” we’re given a glimpse of. The result is a dream — a nightmare — captured perfectly on technicolor. It’s a rich and beautiful film like no other.

As an aside, it also has one of the best taglines ever written: “The only thing more terrifying than the last 12 minutes of this film are the first 92.” I’m not sure if that’s exactly true, but it’s a great sell line! 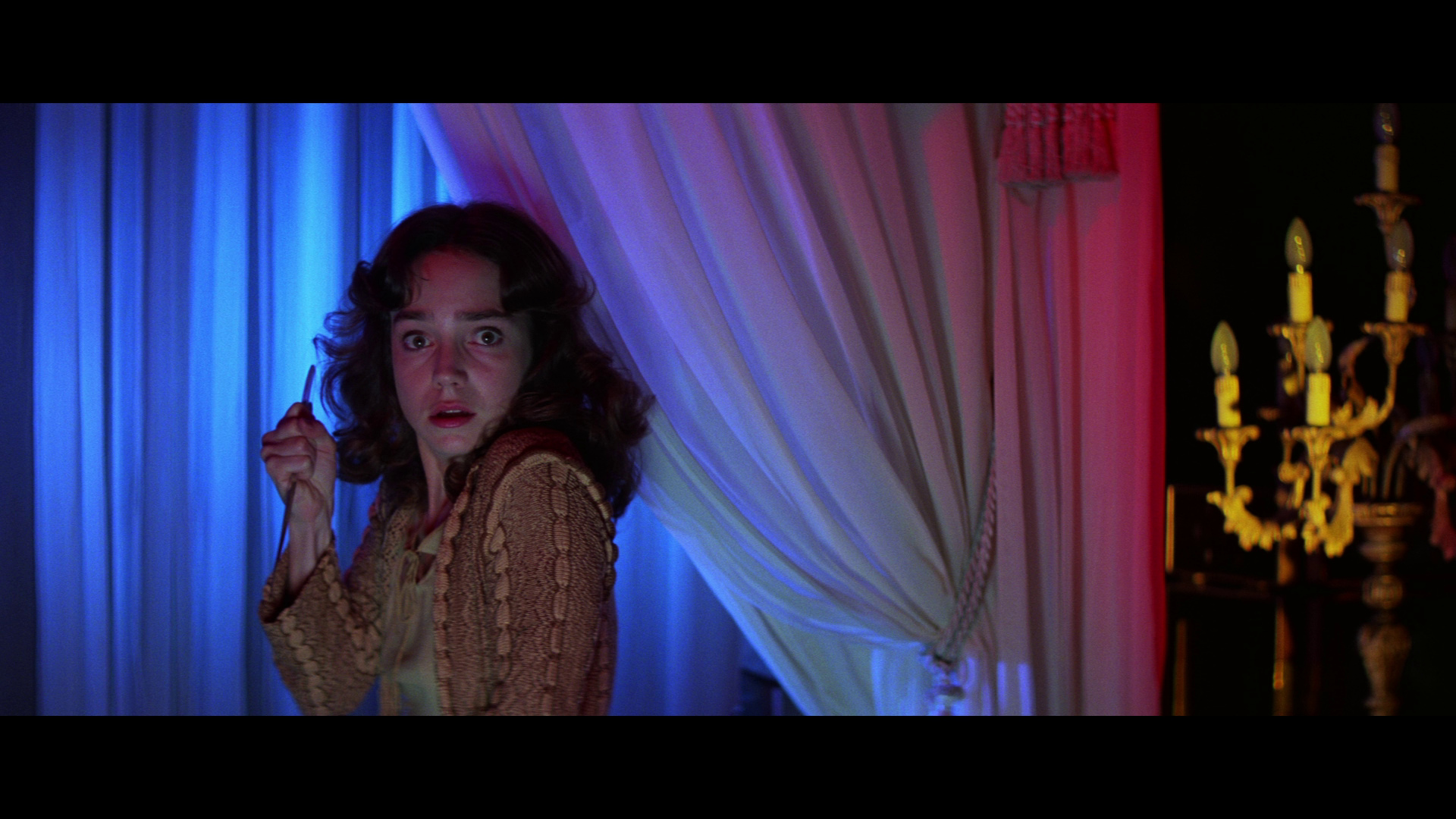 The soundtrack should also be mentioned. The theme by the band Goblin (who Argento would work with on several films) is incredibly eerie and evocative. It really completes the vision by adding an aural color as distinct as the reds and blues of the lighting.

I saw Goblin perform the theme song live in Chicago last year. It’s one of the most haunting themes for a horror movie ever written, and has inspired many imitations over the past 40 years.

If you’ve never heard it, take a listen here: 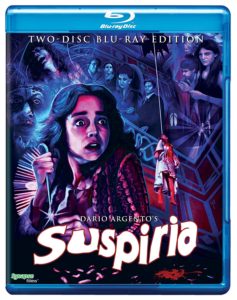 If you’ve never seen Suspiria… do yourself a favor and turn the lights down so that Argento can bathe you in his own vision of reds and greens and blues.

If you’ve seen it in the past, do yourself a favor and watch the Synapse blu-ray. It looks better than any version you’ve ever seen before. There are actually some really cool snapshot comparisons of other DVD releases scene by scene paired up with the Synapse edition on DVD Beaver and you can see the dramatic difference.  I have been a fan of the film since the first time I saw it… but I’ve watched the Synapse edition three times over the past year. I become even more of a fan with every viewing.

Grab it directly from Synapse or buy it on Amazon, but if you’re a fan of classic horror cinema, you need to own this edition.

Suspiria is a film like no other. And now, 40 years after its original release, it’s never looked better! 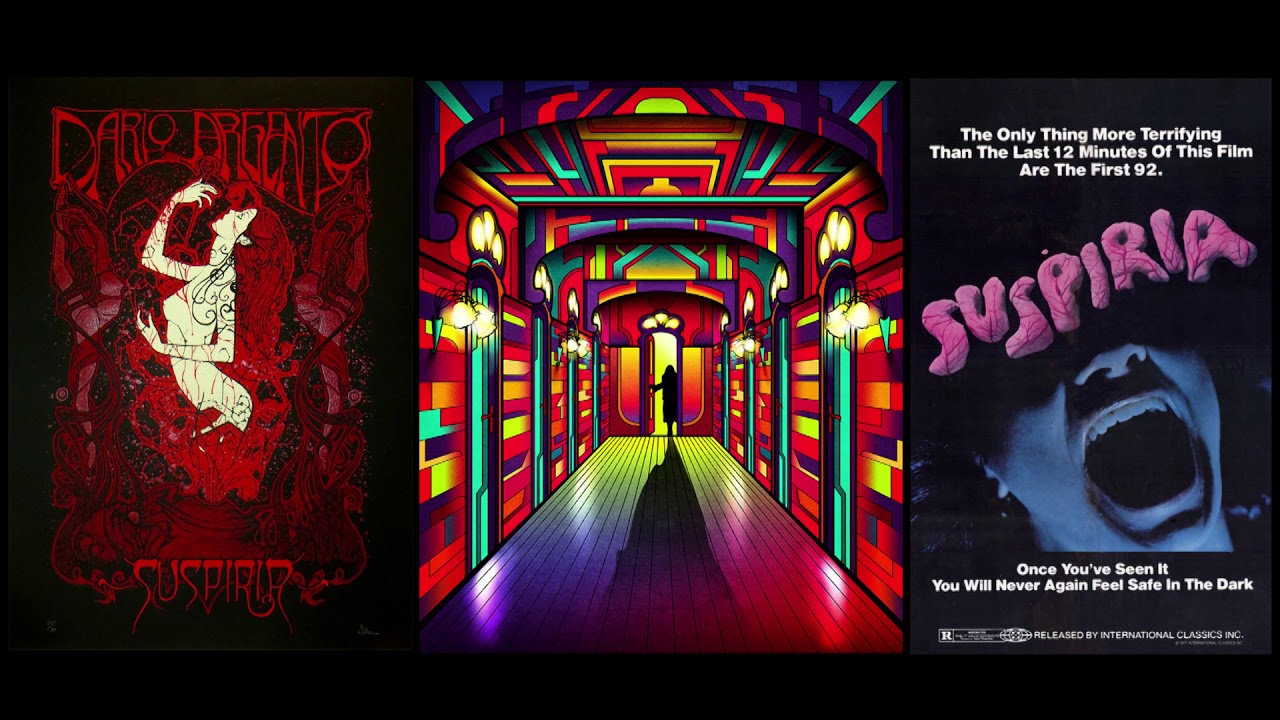