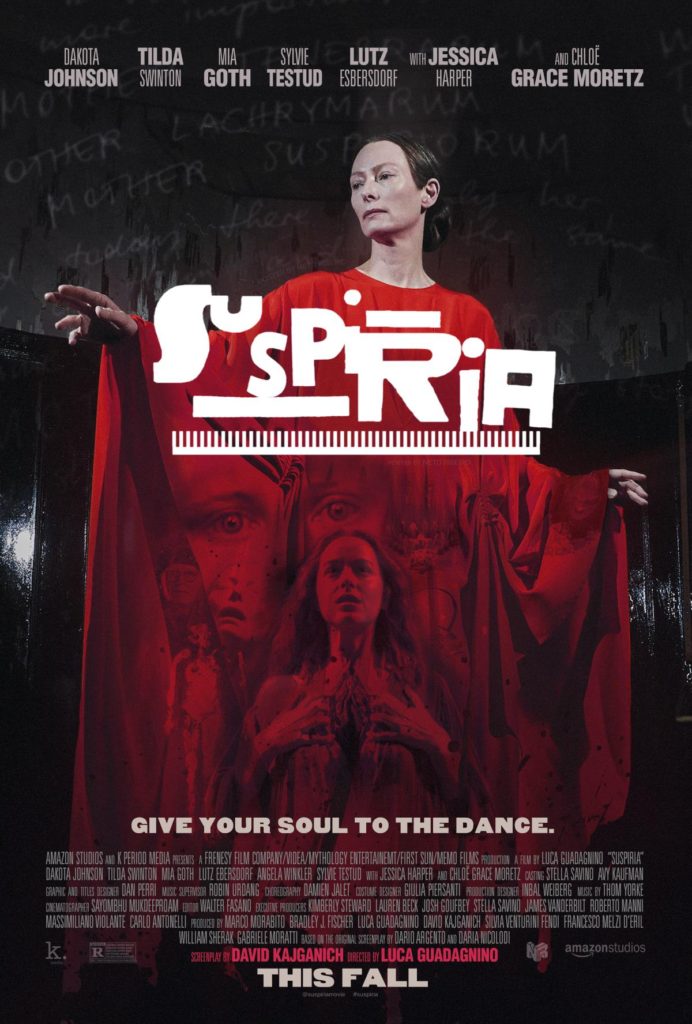 I AM A HUGE FAN of Dario Argento’s 1977 film, Suspiria. So when I heard that director Luca Guadagnino was remaking it, I have to admit, I was not excited. Suspiria is one of those “crowning achievement” films. It’s a garishly gorgeous, if still flawed, work that did not need to be remade. Nevertheless, I had to see what they did to it and so last night, I went to the theater at 10 o’clock at night (the only showing) to see it at the end of its opening week. (I turned out to be one of 4 people in the theater too — so it was like a private showing!)

I approached the film with some trepidation in the opening minutes, and in the beginning, I had a grudging appreciation of what Guadagnino did with the material, but thought to myself, “interesting, but I won’t be rewatching this one as I do the original.”  It certainly does not supplant the original, but by the time I left the theater two and a half hours later, my opinion had changed and I wanted to see it again instantly.

The overall plot is simple and follows the general arc of Argento’s original — a young innocent girl from America goes to Germany to join a famous dance academy led by a world renowned dancer. However, there is a secret coven of witches running the academy and they have plans for the students to bring fresh blood/life to one of the three great witches of the world — Mater Suspiriorum.

A study in contrasts

In Argento’s film, the focus is less on logical plot and all on the color and atmosphere and soundtrack (by Goblin) to bring a kaleidescopic dream feel of horror. The actual story of the witches is not deeply explored or explained and the initial “kills” owe a lot in their execution to the giallo genre that Argento made his original fame with. 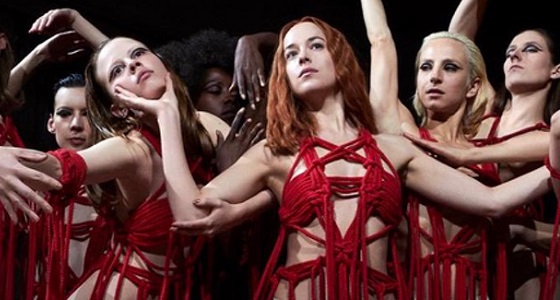 In Guadagnino’s film, all the color is stripped away, bringing a completely different bleak mood to the story (the first introduction of any real color comes in the big dance performance, when all the dancers wear provocative ropes of red). The music is minimal (the plaintive theme is by Radiohead’s Thom Yorke) and in fact, there are dance numbers staged without any music at all (which lends an odd jerky visual feeling to them). The dance academy is a utilitarian highrise building (unlike the rich old world building in Argento’s version) and everything is filmed with a grey wintery caste. It constantly seems overcast and rainy, and the backstory of a politically divided Germany in 1977 with bombs going off in the streets intrudes on the mysterious goings-on at the academy.  The external political divide is reflected in the internal division between the witches of the Tanz Academy, who at one point stage a narrow vote on who will continue to lead the house (the alliances displayed there will play into the finale). 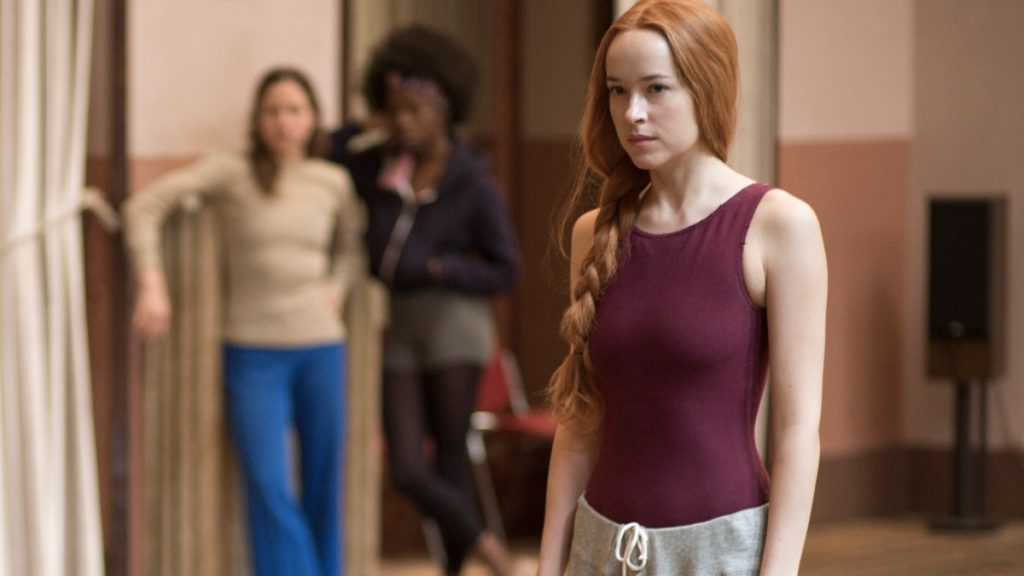 Dakota Johnson, as our heroine Susie Bannion, is amazing. Like Jessica Harper before her, she brings both an initial innocence imbued with stubborn strength to the role, but more quickly vaults from unknown quantity to “dance school star” in this version. The “blind pianist” role of the original film is discounted here. Instead, there is a wraparound subplot of an old psychiatrist who begins to investigate the academy because of one of his patients, a dancer who has reported what he initially thinks are delusions about the existence and dark plans of the company of witches. This subplot also provides a place for original Suspiria star Jessica Harper to make a brief cameo.

In the new film, dance is actually an integral part of “spell” for the witches, an interesting conceit not explored in the original. And instead of using drugs to keep Susie “out of it” at night while the witches hold their ceremonies, in the new version, the witches use magic to invade the girls’ dreams — a more supportable approach, honestly, since it plays up the magic element going on in the academy more.

Where the magic misses…

There are missteps. For one, the film is way too long at two and a half hours — a full hour longer than the original film it pays homage to. And a lot of that extra hour feels like moody padding — material that ultimately lends very little to the story. The first half includes some really pointless backstory imagery of Susie’s past, and the night that Susie spends in an apartment outside of the dance academy is completely wasted time. (Argento’s original used an “off campus” segment for a gory kill scene. Here… it’s just minutes of exposition in an ugly room that doesn’t amount to much.) The Berlin Wall and Holocaust references brought in by the psychiatrist’s story really bring little to the plot, since the core of the story is internal. External setting adds nothing to the drama.

And while some of Argento’s “huh?” plot problems are fixed in this version, there is a new head-scratcher introduced for anyone who hasn’t seen the first version of the film. In the original, Suzy counts the footsteps that go past her room in the night and later, finds the “secret heart” of the school by following the direction of those steps and counting because she knew how many steps there were each night before they disappeared.  In the new film… it’s Sara who uses the counting of steps to lead her to the inner secrets… however, we never see her counting any footsteps going past her room at night prior to this. If you haven’t seen the first film, the scene in the new film has no logical context — how does she know how many steps to count? 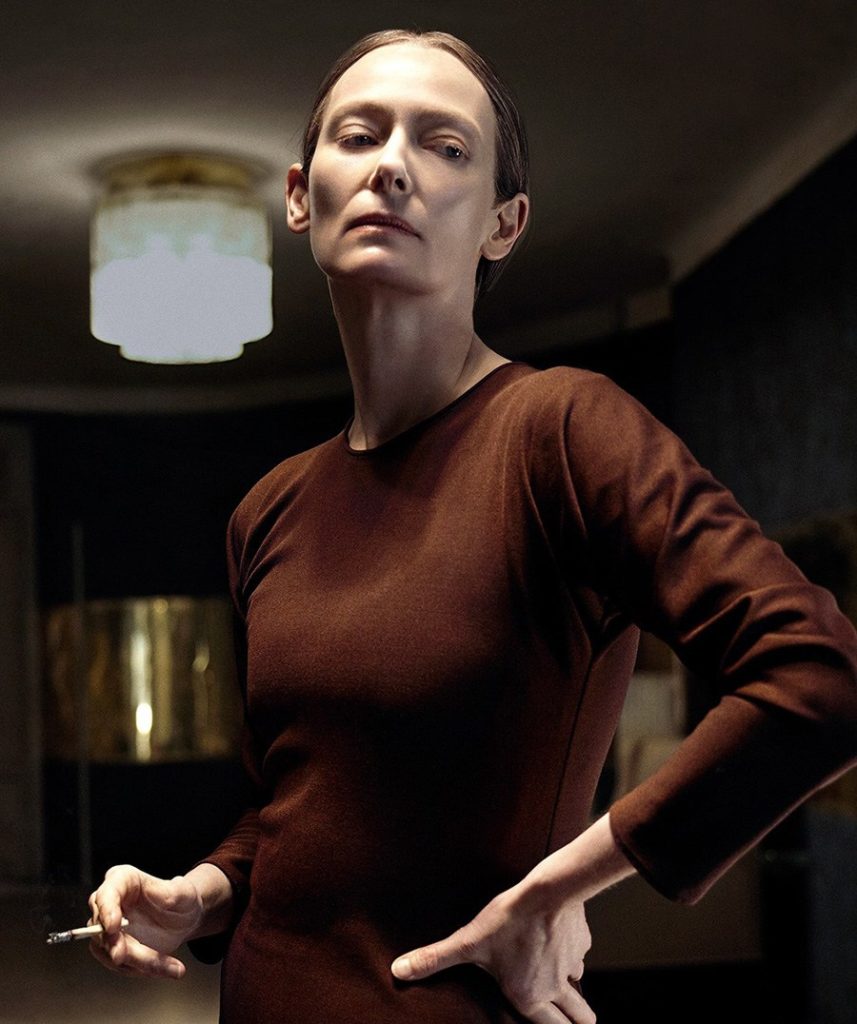 The growing relationship between Susie and lead instructor Madame Blanc (in an excellent performance by Tilda Swinton, who actually covers three roles in the film I was later surprised to discover) departs from the original as Susie and Blanc form a strange alliance.

The last quarter of the film departs in a major way from the premise of the original film, which in some ways, gives this version its reason for being. My original feeling that Suspiria did not need to be remade stands. However, this isn’t a remake per se, but an alternative approach. In many ways, it tries to approach the source material from a different perspective. It focuses on the cold texture of the city and themes of feminine power over extravagantly choreographed kills (though there ultimately is plenty of blood in this film and one kill is, in fact, choreographed).

Before seeing this film, I intentionally read literally nothing about it, and I’m glad I preserved my “innocence” that way. There are some key surprises of the film being readily talked about on the Internet, and I’m glad I was able to experience them with no foreknowledge (I’ve tried to stay general and not too give much away here.)

My bottom line? The new Suspiria does not replace or trump the old, but it is an interesting variation and approach to the same theme that is worth seeing. I’m looking forward to watching it again and catching some of the things I missed the first time around! 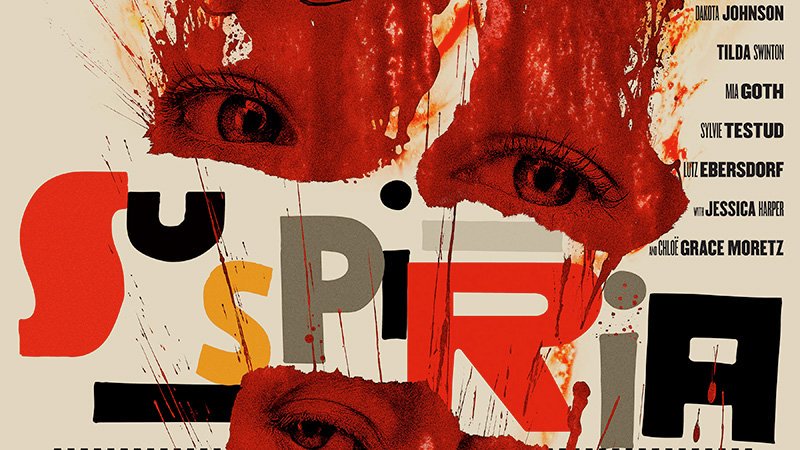