THE HOUSE BY THE CEMETERY Book Release Party 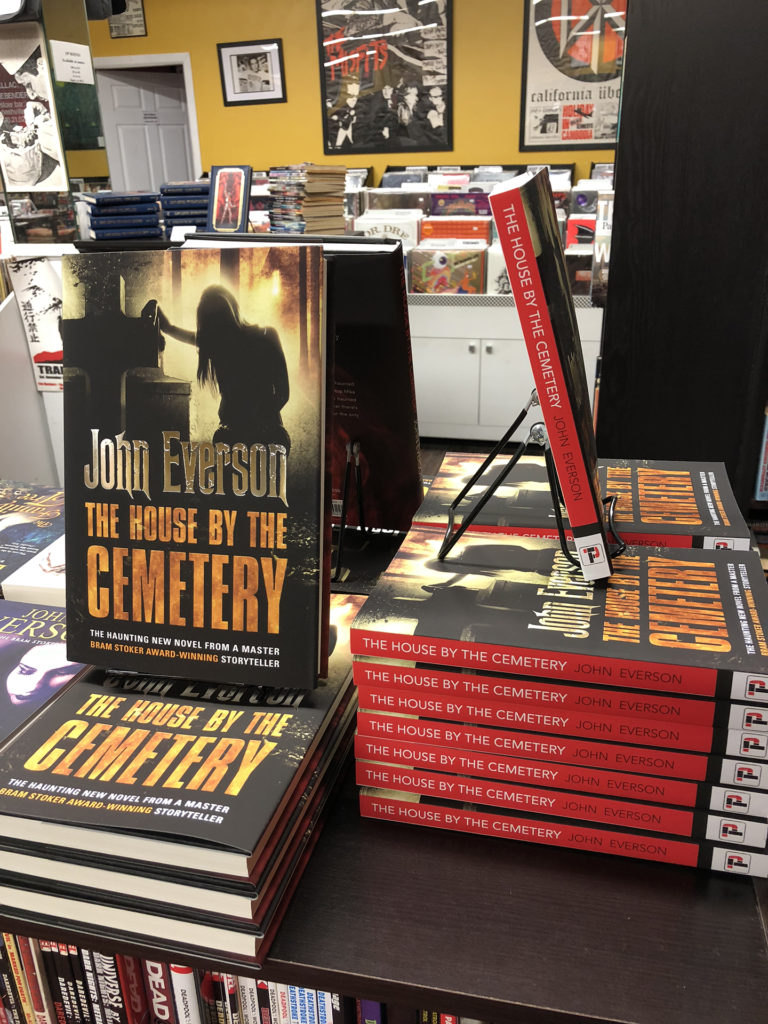 WHERE BETTER TO HOLD a book launch party for a horror novel than a store called Bucket O’ Blood Books and Records? On Thursday, October 11, 2018, that’s exactly where I held mine! Bucket O’ Blood is a very cool used and new books and records and DVDs store in Chicago and they agreed to host the first booksigning stop for my new novel The House By The Cemetery.

I actually did signings and readings at Bucket O’ Blood several years ago when they were in a different location and under different management. In fact, the old store is how I discovered my favorite Chicago brewery and IPA — a fledgling Revolution Brewing Company was just a couple doors down from the original location, and I used to stop in there after events.  So I was really pleased to find that the new incarnation of the Bucket O’ Blood store is just as cool (and a lot larger!) than the last.

And… I discovered another cool beer and burger place while I was in the neighborhood… but more on that in a bit. 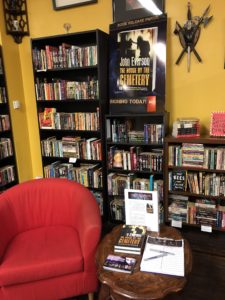 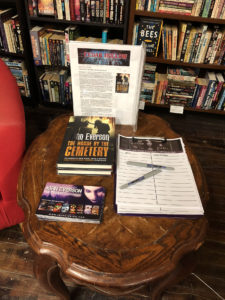 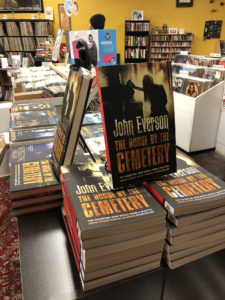 I read the prologue of the novel as well as part of a later chapter, since Lon Czarnecki came out — Lon is an old friend who has watched many horror films with me… and thus has a character named after him in the book. So I read a portion of a chapter that his character appears in. Some other friends and fans stopped in as well, and we had a great chat about the book and writing and more after the reading. 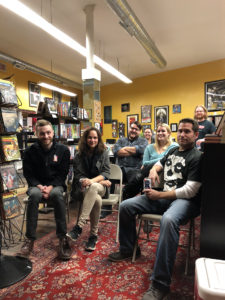 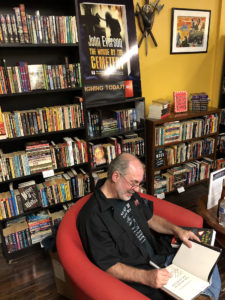 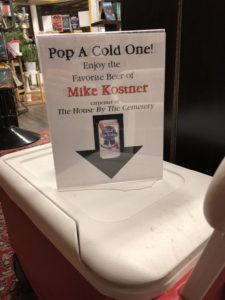 I brought a cooler of Pabst Blue Ribbon, not because I drink the stuff, but because the lead character of the book, Mike Kostner does, and so I thought it would put a bit more “party” in the “launch party”. I didn’t know if anyone would drink the stuff… but actually, we put a pretty good dent in the cooler before the night was over! 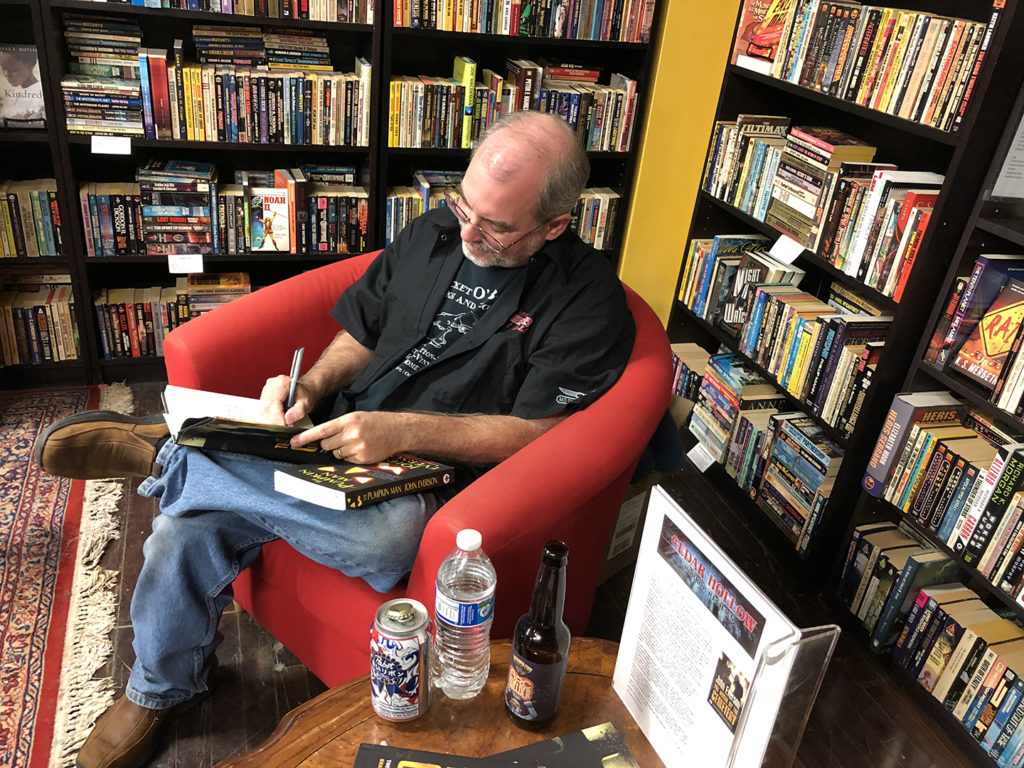 It was a great night, and a perfect location… the place where I sat to do my reading and discussion was in the midst of a bunch of old science fiction paperbacks from Hal Clement, Isaac Asimov, Edgar Rice Burroughs, Poul Anderson, Keith Laumer, Charles Eric Maine and more, many of which I own (and which influenced me to become a writer). So it was like sitting among old friends while talking to friends.

After the event, I packed up the car but instead of hitting the road, I walked over to a place I’ve always wanted to try. Kuma’s Corner is a punk rock burger bar in Chicago that has a great reputation for amazing burgers… and I saw when I parked for the signing that it was just a block away. Seeing as I hadn’t had a chance to have dinner before the event… I made a beeline to Kuma’s afterwards. And they didn’t disappoint! I had a spicy Pantera burger and a Three Floyds ale while watching Nightmare On Elm Street 5 on the bar TV. A perfect end to a great horror night.

Huge thanks to the store for hosting me, and everyone who came out!

It was a great start to a month that also includes signings at the Barnes & Noble stores in Naperville and Orland Park and the Vogt Visual Arts Center in Tinley Park! (View the Appearances page for details on those).

Here are a few pictures from my personal “after party” at Kuma’s: 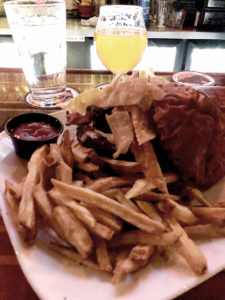 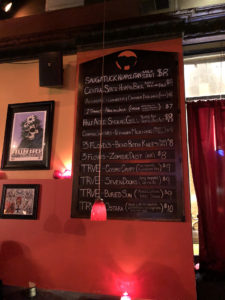 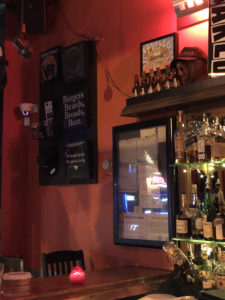 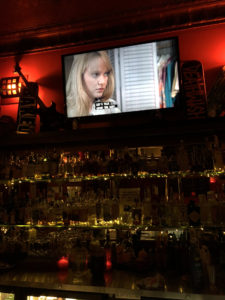