BACK AT THE END of April, when I started visiting bookstores and doing signings to promote my novel Sacrifice, I had this idea that I would blog every week about the tour, post pictures, produce kind of a travelogue… 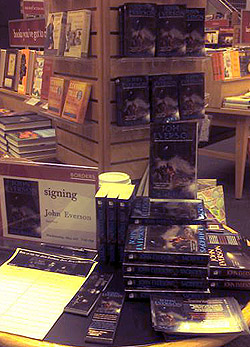 In early May, I chronicled week one (San Diego, St. Louis and Springfield), but since then, I’ve been running around too much to blog about where I’ve been, until now, as it all winds down.

This weekend is the last blast of the “tour proper” which, ironically, I’ll end in my hometown Naperville Borders on Sunday (after a visit to Borders in Merrillville, IN on Saturday).

I’ll have other events coming up this summer — I’ll be at the Schaumburg Barnes & Noble in both July and August, along with a Bourbonais Library Author Fair — but the manic 3-4-signings-a-week phase coupled with lots of roadtrips, is done.

As much fun as it’s been, I’m looking forward to spending some time at home – and at the pool instead of in my car! – over the next few weeks. And now I can sort through the gigantic paperwork mess that’s collected on my desk in the interim, and post this belated travelogue. If you’re interested in a few notable moments from my travels over the past two months, along with some pictures, read on…

After I returned from St. Louis at the start of May, I did a couple of local signings at two stores that have been very supportive to me — the LaGrange Borders (where I enjoyed chatting with one of my biggest bookseller fans for half the night) and Bolingbrook Borders, which is just down the street from my house.

I spent the Saturday before Mother’s Day, May 9th, at the gigantic Oakbrook Barnes & Noble store and even sold a couple copies of Sacrifice to people who said “oh perfect, mom loves that gory stuff!”

Who knew? Sacrifice for Mother’s Day! Wouldn’t have worked in my house, but…

That afternoon also gave me my Tweet-ed Booksigning Quote of the Day from an older B&N customer who told me she used to read Stephen King but now…: “I believe in evil too much to read that kinda stuff.”

That same night, I drove out to DeKalb, a Western Illinois town that’s also home to Northern Illinois University, for a Borders Nite Out event, after stopping to sign copies of my books informally at a couple of bookstores along the way (finally got to enjoy the Claddagh pub just outside the B&N in Geneva). 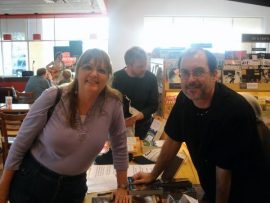 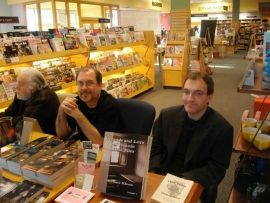 The Borders Nite Out concept is an interesting one – one of the store managers puts together a collage of authors, artists, musicians and more to have entertainment nights in their cafe. We had three authors, a couple musicians and a fashion show there the night I went, and I read a bit of flash fiction for the crowd. I can’t say we sold a lot of books, but it was a lot of fun, and afterwards, my friends Lon and Amy and I decamped across the parking lot to indulge in lots of hot sauce at Buffalo Wild Wings.

On The Radio
I should note that I did a couple radio interviews this spring to promote Sacrifice, which you can still hear pieces of online. I actually kicked off the tour with an hour-long interview on April 15 on The Metal Crypt Internet radio (which you can now listen to via segments 1, 2, 3 and 4 posted on YouTube.

On May 8th, I got to hang out with Scott Mackay and his morning crew at my local Aurora, IL FM rock radio station, 95.9 The River (WERV-FM).  Thanks to my friends at The River, an edit of the full version is now available here:

After the on-air interview, they videotaped me reading the question for one of their daily “Morning Mindbenders” — you can still see that video on YouTube as well:

A few days later, I did a long interview on May 12 with the internationally syndicated X-Zone Radio show, which you can actually still hear via a podcast recording on iTunes (just click here and download episode #99 from within the iTunes application).

From Indianapolis to Cincinnati to Louisville
A couple days after chatting with the X-Zone, I was off to my next roadtrip – this time to Cincinnati, which is rapidly becoming one of my favorite towns. I had a great time there last fall when I toured through the town for Covenant, and so this time, I extended my stay a bit. As I did last fall, I drove to Indianapolis on Friday morning for a lunchtime signing at the downtown Borders there.

I was cruising along the highway, almost three hours into the trip, merrily Tweet-ing away on the long highway, when it suddenly occurred to me that I had forgotten to take the time change into account when I planned my morning start time!!! Nice job, Ace. So yes, I’d thought I was ahead of schedule, but I actually started the weekend by arriving 45 minutes late to my first signing. Embarrassing!

Nevertheless, it turned into a good signing, where I sold more than a dozen books and made a great new fan in Lindsey, who I talked into buying a copy of Covenant when I saw she was walking out of the store holding a Charlaine Harris book. She later blogged about it and went right on to grab Sacrifice!

It’s also the only signing where anyone came up to me and said, “Well, I can’t afford to buy a book right now, but you’re an author, wow… would you sign this?” before producing  a crumpled receipt from his pocket. Didn’t beat the teenaged girls who had me sign their hands last fall though. 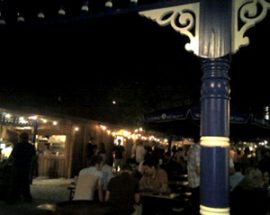 After the Indy signing, I hopped right back on the road because I had another signing scheduled (which kinda sucked because there were some good brewpub places I wanted to check out in downtown Indy!).

That night I spent three hours at the Eastgate Borders store in Cincinnati, where I talked with a couple folks who’d met me there a few months before. Then it was down to the Newport Levee to grab some good German beer and kraut at the Hofbrauhaus before crashing for the night a block away at the Travelodge. 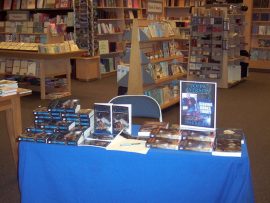 The next day, I drove all around the city to visit area bookstores, sign copies of my books for them and leave behind some promo postcards before my next formal signing in the afternoon at the horror-friendly Barnes & Noble in Florence, Ky. I snuck in a quick pannini beforehand at my favorite British pub in Kentucky,  The Pub, which I discovered last fall.

That night I went straight from Florence to Newport  to sign for a few hours at the Barnes & Noble next to the Travelodge I was staying at. The latter was my most successful stops on the tour, as it was last year when I was there. I’m looking forward to going back!

To cap the night off, I ate dinner at an Italian place just across the square from the bookstore while listening to a band murder cover songs as they played to the tourists outside. They provided me a good Tweet if nothing else: “Having dinner on the Levee in Cincy… and a live band just merged Pink Floyd with Fleetwood Mac… now that’s Horror to me!”
(click thumbnails for larger photos) 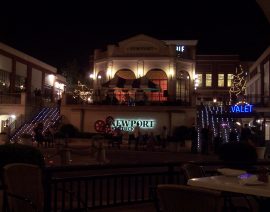 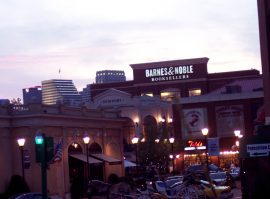 The final day of this manic weekend roadtrip I spent in Louisville, visiting a couple of Borders and Barnes & Nobles before a formal lunchtime signing at the Shelbyville Road Borders there. This turned out to be the only stop where I had a true “glitch” on the tour – the distribution arm for Borders had failed to stock them with books, despite numerous requests. Luckily, I always travel with some books in my car, and the store simply sold my copies!

As I was heading out of Louisville on the 5-hour drive home, I got a Tweet from longtime friend Mehitobel Wilson telling me that since I was in town, I should stop by a Monster Con that was going on there – she’d flown in from Georgia for it. Talk about bummed! I had no idea the thing was going on while I was there or I probably would have stopped for a little bit, to see Bel if nothing else (who I’ve not seen in person since Horrorfind 2004). But it was too late to turn back at that point.

Closing out May
Over the next two weeks following the Cincinnati roadtrip, I fulfilled another longtime author dream – to sign at the Borders store on State Street, in the heart of  Chicago.  A few days later, I signed at two of my local Borders  — in Matteson and Orland Park — who were each incredibly supportive of Covenant and were equally excited to help me with Sacrifice.  I closed out the month with another close-to-home, very supportive store — the Downers Grove Barnes & Noble.

It was after the Orland signing that I finally got out to see the new version of Star Trek — and was blown away. Great scripting, savvy reinvention. As an “old” Trekker who was never sold on “New Generation” or “Deep Space Nine” (though I did like “Voyager”), this was a welcome return to the spirit of the original in many senses.

June on the Road

Over the first two weekends in June, I drove down to Nashville to guest at the Hypericon convention, and the next week flew out to Burbank, California to attend the Bram Stoker Awards weekend, both of which I’ve blogged about separately. And then I had a business trip to Atlanta, which allowed me to fit in a Barnes & Noble signing night there as well.

And here we are. The last week of the month, and the end of a long road. It’s been fun, but I’m ready to curl up and relax with a good book. And a big plate of barbecue. Yes. Thank God Naperville Ribfest is just a week away!

Someone fire up the barbie!