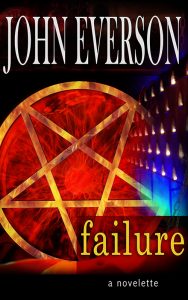 BACK IN 2006, my novelette Failure  launched a “hardcover chapbook” line for Delirium Books. I got to create the wraparound cover art for that and the next several releases in the line, which was a lot of fun and really allowed me to stretch creatively.

This week, my imprint Dark Arts Books has reissued Failure with new updated cover art as well as a new author Afterword. The original full wraparound cover art is also included at the end of the book.

To celebrate the reissue, the novelette is free this week on Amazon — I’m hoping lots of people will download, enjoy this twisted little tale and spread the word about the book so it finds a new audience.

The story revolves around three teens, who are lured into a twisted occult plot by a wizard with the promise of sex and drugs. But they never realized that the old man’s intentions were far darker than voyeurism.

Here are a couple of the reviews that the original edition received:

“…kind-of like reading a novella-length version of lyrics to a Slayer song …Failure is an impressive, fast-paced read that shoves your face into the sleaze and then takes off like a drive-by shooting. For a short story, this sucker packs quite a punch.”
–The Horror Fiction Review