WHEN I FIRST turned in the manuscript for my sixth novel NightWhere last fall to Don D’Auria, my editor at Samhain Publishing, he suggested that I consider changing the title.

“NightWhere,” he said, “kind of sounds like it might be the lingerie floor at a department store!”

Or something to that effect.

Obviously, I didn’t change the title, though I recognized that he probably had a point. But considering that the novel NightWhere is about a dark and mysterious adult sex club, I figured the idea of people thinking about lingerie when reading the title wasn’t necessarily a bad thing!

And this week as I was thinking about what to do for this year’s Coffin Hop, it occurred to me… what better contest for NightWhere… than one involving Night Wear?

This is the week leading up to Halloween, and I am participating once again in The Coffin Hop Blog Tour (see details in the right hand column) where you can bounce blog to blog to blog through dozens of horror sites and enter all sorts of contests. It’s a great way to discover new writers and via digital trick-or-treat, win some cool stuff.  I hope you’ll follow the Hop and enter my little challenge (and welcome, if you came to my site from the Hop!).

Since Halloween is the time of “dress up,” I thought this would be the perfect time to stage a NightWhere contest centering around “dressing up!” This one’s easy, and people had a blast when my publishing company Dark Arts Books staged a pajama party at World Horror Con a few years ago, so I figured… why not stage a virtual one. Hence, I  bring you:

1) E-mail me a photo of you flaunting your “Night Wear” to john@johneverson.com

2) Include in the email your name, mailing address in case you win, and whether or not I can post your entry photo here on my blog.

3) Interpretation is wide here — the photo could be of you in your flannel jammies, nightgowns, teddies, silk boxers… it could be the kind of clothes you’d wear if you were going to attend NightWhere (those could be pretty interesting… though I might not be able to post some publicly LOL!) The photo could even be your Halloween costume if you wore it to a party at night. (That’s “night wear” right?)

On Halloween night, I’ll put the names of all the entries received in the Great Pumpkin and pull names. 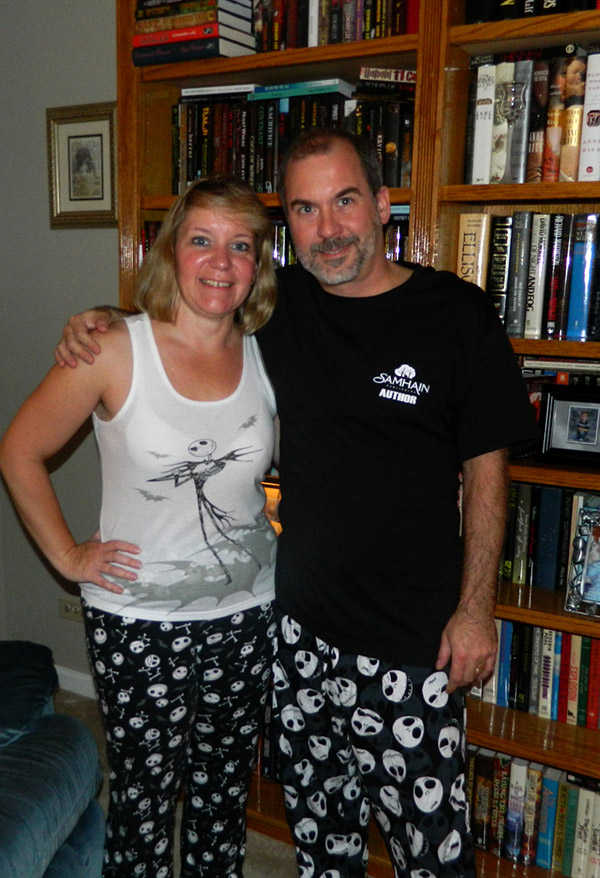 If there are enough entrants, I’ll also pull a couple of runner-up prizes for copies of NightWhere or Siren (your choice!).

Also, if the entrants consent, I’ll post some of the photos received over the next few days right here on this blog sans names (you early enter-ers could inspire other participants!)

Hell, Geri and I even went first.

Here we are in our Night Wear. Sportin’ Jack.

Jack Skellington, that is!

So go ahead,  Show Us Your Night Wear!

And when you’re done showing off… drop on over to the other Coffin Hop sites and see what other deviant contests lie in store!

If you’ve been a fan of my stories for any time, you probably know my affinity for pumpkins. 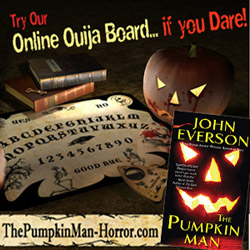 Every year for more than a decade, I’ve steered readers towards a free story of mine called “Pumpkin Head.” Call it my adult version of “The Great Pumpkin.”

Last year for Halloween, I released my 5th novel, The Pumpkin Man and you can now read “Pumpkin Head” for free on the site dedicated to that novel.

You can also read the original story that inspired The Pumpkin Man… and you can have some fun talking to the online Ouija Board we developed for the site. Check it all out here: johneverson.com/thepumpkinman-horror. And if you play the Ouija Board – make sure you click the iPod… and the pumpkin!