Today, fellow horror author M.R. Gott and I have “traded blogs.” You can see my post for the day about Eurotrash Horror Movies at M.R.Gott’s blog, but before you do that… read on:

Why do you write Horror? 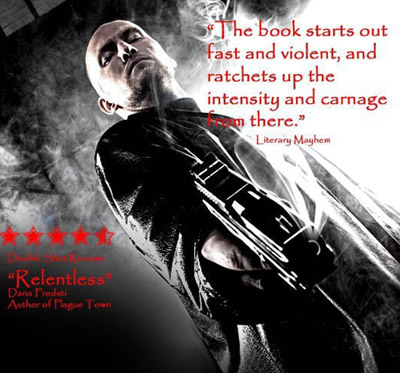 This is a typical question that most horror authors are asked.  What type of person would sit around thinking of and creating horrific sequences meant to elicit fear from their reader?  It is a fair question.

The allure is simple.   It is not a desire to create sequences of nauseating violence, it is because without the threat of failure or risk there can be no sense of triumph.  It is only in the true sense of danger that our protagonists can succeed.  Victories in a horror novel are not taken for granted, in this they are more valuable.

In a Horror setting the reader or viewer knows that the protagonist or hero is not certain to survive.  Sure in Die Hard the odds are against McClane, and yeah Segal faced down an army in Under Siege, but was there any doubt that they would survive?

In a Horror story anything can happen to anyone at any time, and if the protagonists are well drawn the reader will truly root for them because their triumph and even survival are not guaranteed.

From an early age I was drawn to these stories, even before I even understood the ‘horror’ label.  In a long ago time, Halloween was the easiest season to seek out these stories.  Horror films were on TV nearly every night.  I remember setting the VCR in the living room to record these intense features I knew my parents would not want me to watch and finding time later to view them.  Two that stick out vividly were IT and the original Nightmare on Elm Street.  IT was a TV movie and Nightmare on Elm Street was censored for TV, but as a lad in elementary school these were intense features.

But why expose yourself to such frightening gut churning ordeals?  The answer is simple, even a viewer or reader can triumph when experiencing one of these stories.  If Freddy scares you, stare him down until you have overcome him.  This is why Horror franchises lose their bite.  By Freddy’s Dead you know what’s coming even though you have never seen it.  But when re-watching the original you are remembering how it made you feel, and experiencing a frightening form of nostalgia. 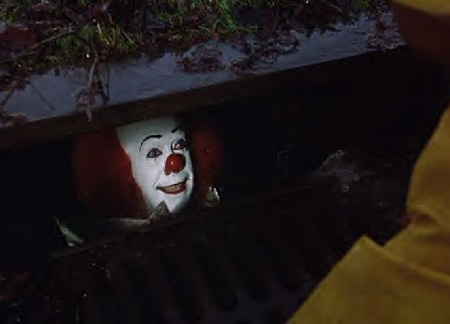 As a child I was an avid reader and quickly worked through what was in the children’s section of my local library.  During the month of October the Horror books would be pulled from the adult fiction racks and displayed prominently.  The cover art alone on some of these books could inspire a thousand lurid dreams.

When I found a an old copy of In The Flesh by Clive Barker I immediately recognized the image, and didn’t realize I had since read another edition. I purchased the copy anyway solely for the cover art.  I had read a number of King’s books as well as the bulk of Crichton’s work by the time I was 11 or 12.  I sought out King’s Novel IT at my local library, because damnit the movie was a two parter and I missed the second half when I recorded the first.  I knew I would never get the book out of the library and into my house while keeping my parents ignorant of my actions. (damn thing was long and the hardcover was larger than a couple of bricks)  I was also very aware that my parents would (rightly) not see this as appropriate reading material or an 11-year-old.  The exact consequence of failing to covertly sneak/checkout the book from the Library and into my house was irrelevant.  It would not have been pleasant.   Rather than tragically attempt to re-enact Steve McQueen’s Great Escape, I power-read the second half over the course of a few weeks.

Smaller paperbacks were easier, but not immune to my parents need to act responsibly.  I remember clearly my Dad taking away Interview with the Vampire and Silence of the Lambs from me before I was 13.  I tried to argue Silence of the Lambs was fine, but he tricked me by asking me to describe the last scene I read.  I told him Clarice had just found a rotting severed tongue in an old storage cellar.  That was my mistake, he opened to my bookmark, skimmed it briefly and that book went back to the library.  After reading these books later in life it was clear he made the correct paternal call.  Michael Crichton hid his terror in the guise of Science Fiction, making his novels more palatable to my Dad.

Jurassic Park was one of the first truly intense novels I remember reading, and then prompting re-reading.  By the time the film was released theatrically I had read the novel at least twice fully though, and the second half a few more times.  I clearly remember my Dad taking me to see the film shortly after it was released.  On the car ride to the theatre he tried to prepare me for what was going to be an intense film, and while we were there some kids my age left nearly in tears, somehow though I didn’t find it that scary.  (Aside from the opening when the dude is dragged into the Raptor cage)  The book was better, a startling lesson for an 11-year-old kid.    There was a sense of accomplishment as we left the theatre together.   I had faced something that was intended to frighten and my steely nerves were victorious.

Horror allows us to confront our fears in a safe environment.  Halloween is a reminder of this.    Ghouls greet us in the windows of stores and we all watch in anticipation as a little kid walks cautiously toward the animatronic cackling witch.  They may have jumped and ran the first time, but damn it they will not let that stand.  They will conquer the witch, and with it feel a sense of triumph.  On the car ride home they will beam up to their parents regaling them with the tale and explaining that they are no longer scared, and their parent will face the fact that their child is growing up.

Horror and Halloween help us to confront the darkness in the world that surrounds us.  It is a season when it is culturally acceptable to peer into the shadows outside our house, and within us.  And as we cast a light into these dark recesses we learn.  Perhaps there was nothing to fear, and we can take this lesson and grow.  Perhaps there was a creature there and we now know what it is and can confront it.  And perhaps what’s there will overwhelm us and tear us apart and we will never be what we used to be.  But hey this is horror and as I said earlier, not everyone survives.  Then again, maybe we shouldn’t have been who we were and it is in this destruction we will truly become who we are.

But what do I know, I just write scary stories,

M.R. Gott, the author of the novel WHERE THE DEAD FEAR TO TREAD which was called ” frantic, horrific, brutal, and without doubt the darkest thing I have read in years. Maybe in my life, by She Never Slept and “one of the most disturbing and atmospheric things I’ve read in a long while,” by Dana Fredsti author of Plague Town. Aside from writing, M.R. enjoys strong coffee, dark beer, red wine, and fading light.