OVER THE PAST couple weeks, I’ve been to Ann Arbor, Michigan and Calgary, Canada on business trips. Both turned out to be great micro-brew towns, with a handful of small breweries all within a few blocks of each other. So over the course of a few days I poked my head in, snapped a couple pictures and sampled a variety of ales.  It was a great beer snob adventure! Click on any of the pictures to see larger versions… 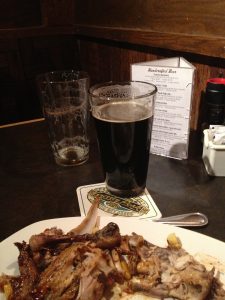 For such a small town, they had an awful lot of busy brewpubs downtown! Interestingly, I had two different locals tell me that the best brewpub in town was Grizzly Peak, so we hit there for dinner the first night. While the menu looked great, the food we had was lackluster (my potatoes came out nearly cold) and the beer we sampled was thin and flavorless. I thought the Bear Paw Porter was OK, but nothing to return for.

The next night we stopped for a beer at Jolly Pumpkin after a great Mexican dinner across the street. I wish we could have spent more time there! The atmosphere at the Pumpkin was better than Grizzly Peak’s, it  looked like a good menu and a much better mix of taps. As it stood, I only tasted the Siren, a decent amber ale. 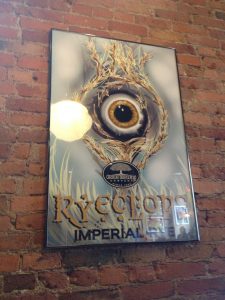 The next night for dinner, we went to Arbor Brewing Company, which had good burgers and an excellent Olde Number 33 German Alt. Both Arbor and Jolly Pumpkin feature some pretty arty labels for their bottled beers – I looked at some of the posters of the bottle art on the walls and wanted to hang them in my basement!

Finally, on the last night, as we were heading out of town, we decided to stop at Blue Tractor BBQ and Brewery. And we hit the mother lode. The barbecue was excellent (great cole slaw, tender brisket, a couple of good tableside sauce options) and the beer was quite good as well – I enjoyed their Sudworth Bock, which apparently has won a couple of  World Beer Championship gold medals. That will definitely be my first stop the next time I’m in Ann Arbor! 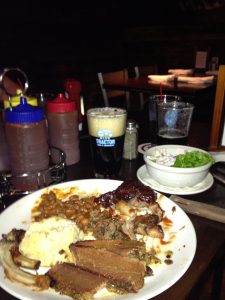 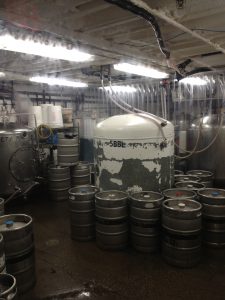 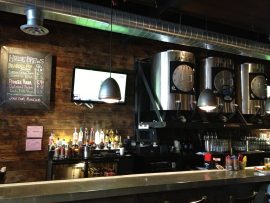 Another smaller city, I found Calgary to be a pretty big beer town in the couple nights I was there.  On the first night, I just walked across the street from my hotel to The Palomino to have some barbecue (pretty decent) and found several area microbrews on tap. 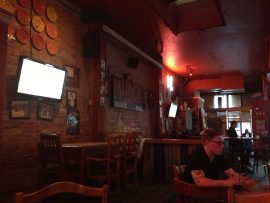 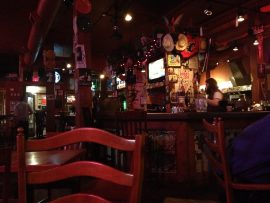 The next night, I had a couple hours free to walk around, so I mapped out a couple places to check out. 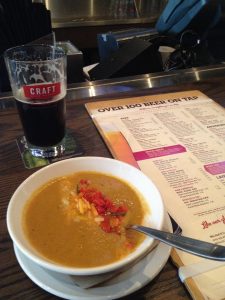 First I stopped at Craft Beer Market, a hip brewpub with over 100 Beers on Tap. I had a bowl of their Cheese/Jalapeno soup, which was phenomenal, paired with an equally pleasing Howe Sound Rail Ale Nut Brown brewed in Squamish, BC.  I could have kept drinking that, but with 100 taps to choose from… I figured I should taste something else. So I had a couple samples of things that didn’t bowl me over, and then  settled on a pint of Central City Red Racer IPA from Surrey, BC which was a nice little IPA – surprisingly drinkable for 80 IBUs.

I pulled the plug then on Craft Beer Market, to check out another place for dinner, but pledged to come back the next night.

I decided on dinner at the Design District Urban Tavern, a really fun gastropub that changes their menu daily.

They have chalkboards on the walls as well as on wheels throughout, so that you really had to look the place over to figure out what you wanted!

They also turned out to have the best Poutine (with roasted jalapenos!) I’ve ever had. I’ve been to Canada quite a few times, but it was only in the past year or two that I finally realized the allure of their Poutine (french fries with cheese curds doused in brown gravy).

The District Burger wasn’t bad either. ?

They didn’t have a large selection of taps, but their home-brewed Hairy Eyeball, an unfiltered wheat beer, was light and refreshing (and served in a mason jar!) 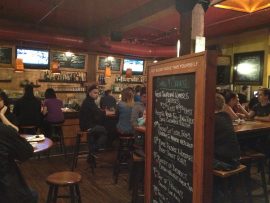 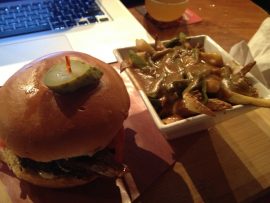 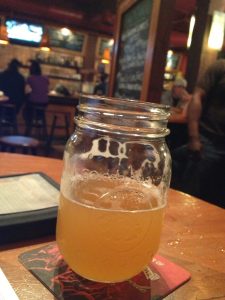 On my last night in town, I decided to have dinner at Craft Beer Market… but when I got there, I found that every seat in the place was taken! It was mobbed (I can understand why… but I was pretty disappointed!). 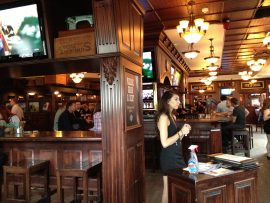 Instead, I walked a couple blocks to Hudson’s Canadian Tap House.  The place had a perfect brewpub atmosphere – great bar, some nice booths… but after a couple of appetizers and their Bale House Ale, I’m afraid I wasn’t terribly excited by any of it.

I wrote there for awhile, but then cashed it in because I didn’t want anymore “just ok” beer when there were plenty of options in town. I stopped back at Craft Beer Market, but the mob there was even worse than before — in fact, they pull all the chairs from the bar on Fridays because it’s so crowded!

So then I walked down to Brewsters, a nice brewpub with their own microbrews. They are also physically connected to Beer Revolution, so if you don’t like the house taps at Brewsters, you can walk down the hall and be in another restaurant/bar with essentially the same menu, but a host of microbrew taps. Their taps change so regularly, that the place is outfitted in lighted menus showing what’s on tap that day and how long it’s expected to remain available. Pretty cool system for the hop head! 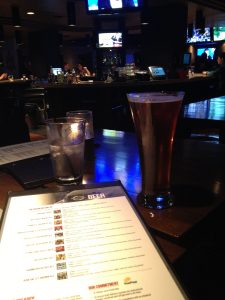 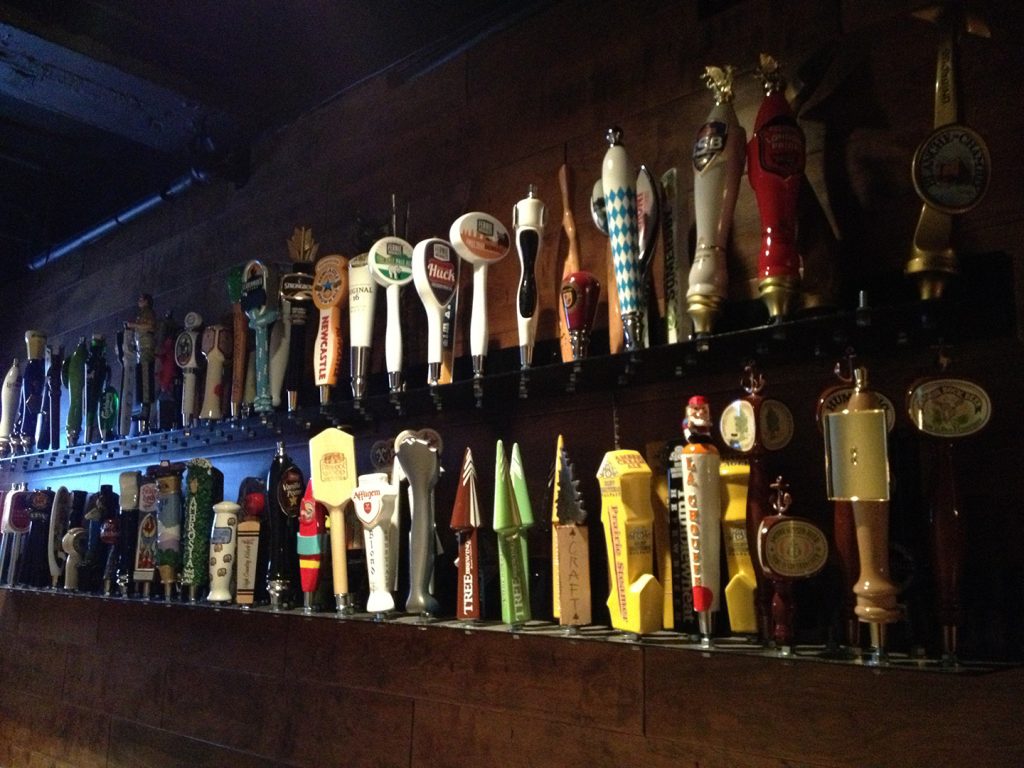 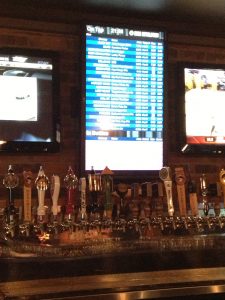 I wish I’d had more time to explore Calgary – it seemed like a really friendly, homey city – with a rich network of gastropubs and brewhouses!