Vigilantes of Love in paperback again!

THE 10TH ANNIVERSARY edition of Vigilantes of Love, my 2nd short story collection, came out in e-book a couple months ago, and now I’m happy to announce that it’s also available once again as a trade paperback.  The book includes an updated cover (using elements of the original, but rearranging them a bit), a new preface from me (about the book and the decade since its release) and six stories that were originally considered for the 2003 edition but cut due to space considerations. So the collection now offers 21 stories in all and Vigilantes of Love in paperback offers 228 pages in print. It’s grown up over the past decade. ?

In his review of the original edition of the book, T.T. Zuma from HorrorWorld said: “There are several stories in Vigilantes of Love that I would consider not only above average, but superb. Quite simply, they are among the most enjoyable short stories that I have read in the past few years. Everson managed to put an emotional spin into these tales that affected me so deeply that I paused for awhile after reading each one. And it was not because any of these stories were overly intense, in fact, I thought their approach subtle, but still, they managed to pack one heck of a punch.” 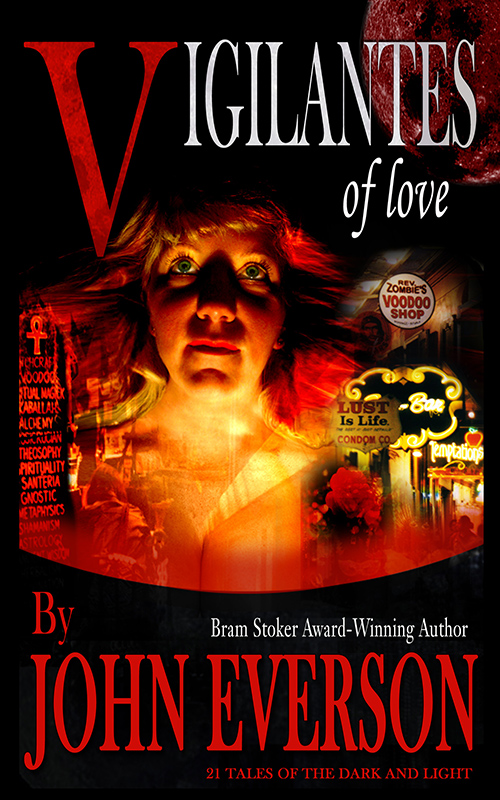 The 10th Anniversary edition of Vigilantes of Love, John Everson’s second book-length collection of tales of short fantasy and the macabre, includes a new preface by the author and six additional stories not present in the original release!

The Dark Arts Books 10th Anniversary edition of Vigilantes of Love is an expanded release that includes six never-before-collected Everson tales — including his first horror publication, “Learning To Build” — alongside Vigilantes of Love‘s original 15 dark fantasy and horror stories. The book includes the voodoo-zombie oriented title story, written especially for the collection, as well as “Calling of the Moon,” which received an Honorable Mention in the Year’s Best Fantasy & Horror anthology, and “Lovesong” a 5th Place winner in the 2000 World Horror Convention Fiction Contest.

To purchase a copy:

To purchase a copy or get more information, visit:   http://www.amazon.com/Vigilantes-Love-Tales-Dark-Light/dp/0615808603/