Home The Horror Life Back to the Alma Mater

Back to the Alma Mater

THIS WEEK WAS like a return to all my old stomping grounds!

On Wednesday, I did a signing at a Borders in LaGrange, IL, a town that I remember visiting as a kid because my dad worked and banked near there when I was growing up. There used to be a classic old outdoor clock in the cobblestone courtyard area near the bank that I remember always looking at. I never thought as a kid that I’d grow up to sign in a bookstore there. Especially to sign two high school girls’ hands!?!

Then yesterday, I spent the afternoon at a Borders in Matteson, IL, across from Lincoln Mall, where I used to go a lot as a teen to play video games in their arcade.

On Thursday, I did something I never thought I would do in my life — I returned to the University of Illinois as a “guest lecturer” — for a reading / signing at the Illini Union Bookstore. 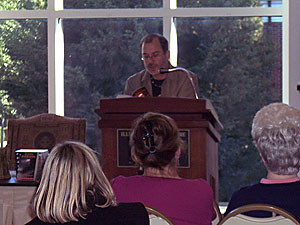 Geri and Shaun drove down with me (we had lunch at the Market Place Mall which has had an impressive makeover since I last visited) and stopped at a couple bookstores to sign stock before we hit the university and walked around the quad a bit.

Back when I was in school there (20 years ago) the bookstore was actually inside the Illini Union building. But these days, it has its own giant two-story building across the street from the quad on Wright Street. 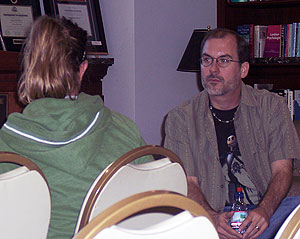 The student newspaper where I used to work as a night reporter (and where Joe in Covenant gets some of his background) has moved twice since I was there, and apparently has some pretty impressive digs on Green Street these days, though I didn’t get the time to visit.

While the turnout for the event wasn’t phenomenal (there was no advance local media support plus it was a gorgeous day outside) I did meet a professor from the university, and was interviewed by the Daily Illini (where I once worked!) as well as two journalism students. 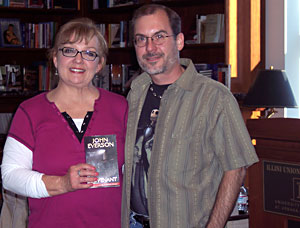 But the best part was in finally meeting a longtime fan (and MySpace friend) Sheila, who brought her mom and daughter down to the event.

I read “The Right Instrument” as well as a couple chapters of Covenant, before talking with Franne and Scott at the bookstore about some future events.

Afterwards, we met an old friend of Geri’s and had dinner at the best pizza place in UIUC then or now — Papa Del’s — before driving the 2.5 hours back home.