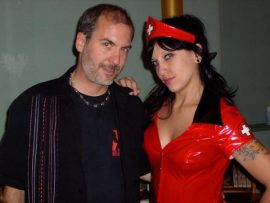 LAST WEEKEND, I spent Friday through Sunday hanging out as a guest at the Chicago Horror Film Festival at Chicago’s Portage Theatre… and had a bloody great time!

Friday night at the fest I finally met a bunch of folks I’d only previously known through e-mail, including  members of my MySpace friend list, the gang from www.horroravenue.net (who ran a table of horror garb next to me), Brian Kirst from the Horror Society and more…

Jimmy Z from The Horror Web was there selling shirts, so we talked a bit (and thanks to Jimmy for the Tiffany Shepis shots on this page). I also met festival hostess Kenzie (she of the red nurse outfit) and festival PR maven Jessie (pictured here in full zombie makeup). Thanks to Jessie for the bulk of the photos on this page since I forgot my camera the whole weekend – check out her full gallery of photos from the weekend on her MySpace page!

Two bands played late on Friday instead of movies, which may be why the crowds slowed, and I found myself wishing I’d brought the laptop along so that I could have gotten something done instead of just sitting there in the lobby staring at the other vendors… of course, when I brought the laptop the next day, on Saturday, it turned out to be useless — the lobby was busy virtually all day and night on the “big day” of the film fest which ran from 1:30 in the afternoon until midnight.

Saturday, unfortunately, I  got a late start on the fest since I blew out a tire on the way down (gotta love changing a tire on the shoulder of I-290 with your back to the traffic whizzing by just a couple feet away! Now THERE’s a horror story!)

When I walked in the door finally, I met Uncle Dougie and the ChicagolandHalloween.com crew, who did a video interview with me and handed me two custom-made mugs that had my book covers and website banner emblazoned on them, in thanks for my donating a couple signed books to their contests this season. 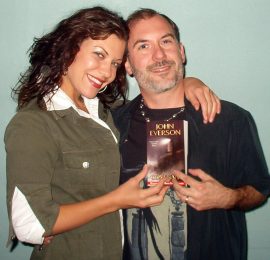 That was a really cool thing, and a little later another pretty cool thing happened – a radio crew was out doing some videotaping for YouTube promotion of their station, and interviewed Scream Queen Tiffany Shepis, who has appeared in dozens of horror flix, at my table.

Tiffany was a riot, picking up the Dark Arts Books anthologies Like a Chinese Tattoo and Sins of the Sirens off my table and shilling them, and then performing an impromptu dramatic reading from one of my stories from the Vigilantes of Love collection! 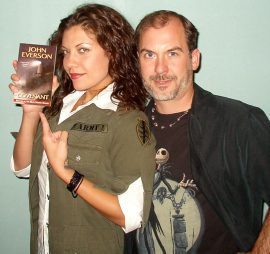 I can’t wait to see that tape.

I left the table for a few minutes to catch some bits of Bonnie & Clyde vs. Dracula, one of Tiffany’s two films in the fest, which looked like a lot of fun, as did the campy Fright Flick (a movie about a dysfunctional crew shooting a horror movie who are getting picked off one by one by a serial killer).

I also saw most of the “Scream Queen” contest, hosted by Ron Fitzgerald (star of the movie Magus) who did a masterful job at the mic. There were definitely some “bloodcurdling” moments in the contest, not the least of which came from Chad Savage‘s 6-year-old daughter, who took 3rd place.

I missed the Zombie Pinups contest Chad hosted, but I did meet Rich Koz, the legendary Chicago “horror” host who is rarely seen without his rubber chicken.

Towards the end of the night, the lobby had pretty much emptied as everyone left was in watching the showing of Midnight Movie. So I abandoned the table, took my popcorn and plopped down to actually enjoy something as a fest viewer rather than participant! It was a fun movie that played on a nice twist on point of view — in the movie, the film that is showing in a theatre where a group of people are trapped is actually exactly what is being seen from the point of view of the serial killer who is knocking off the film watchers one-by-one.

During a post-screening Q&A, I learned that the director is originally from Wheaton, the next town over from where I live, which was kinda cool.

I got home at 1:30 a.m. and 6 hours later woke to a toddler in bed with us, suggesting that it was time to go downstairs for breakfast ? After an intense play session with Thomas the Train, I cut the grass and headed down to NTB to get my tire replaced before hitting the third and final day of the film fest.

While the tire was supposed to be there by 1 p.m., it was actually about 2:40 p.m. when the laggardly wheel rolled in from another shop, and so I once again arrived late for the start of the fest. Which was ok… Sunday started slowly, but then gained some steam as the day moved towards the Deviant Desires model exhibition (which consisted of a bunch of the attendees getting made up in professional blood and gore makeup and showing off the work on stage) and the fest award ceremonies, where Tiffany Shepis took best actress.

I enjoyed another “healthy” dinner of nachos and cheese and had hoped to catch the final film of the fest, Evilution. Unfortunately, the fest got a bad DVD of the film, and the promoters were scrambling at 11:15 p.m. to find an alternate copy to show (they handed out donuts to those who had been waiting for an hour in the theater).

Since Monday was going to be a busy day at work, I didn’t get to stick around to watch the last award-winning flick of the fest.  Kind of a bummer, since I’d hoped to end the film fest by actually watching a film! Nevertheless, it was a fun weekend, and I met lots of cool Chicago-area horror fans over the course of the three days!