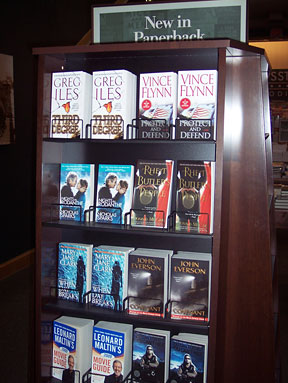 IT’S BEEN ANOTHER whirlwind week on the Covenant book tour!

Two days after getting home from my Indianapolis/Cincinnati signing spree, I had to fly to one of my favorite cities — San Francisco — for a two-day business trip… so naturally, I slipped in a bookstore signing while I was out there.

I sold more than 20 books and met lots of interesting people. And my friend Loren Rhoads dropped out with her daughter Lenore; it was really nice to see them, though we didn’t get to talk much — Loren said “nuh-uh” to a  long conversation: “you’re here to work!” she observed. So that’s what I did for the next few hours, and met lots of people from Sweden and England and other places — since there was a 45,000-person Oracle convention going on just down the street at the convention center (the thing is so huge they actually close off a street to accommodate all the foot traffic).

After the signing, I signed a couple copies of Covenant stocked at the Borders at Union Square (I also had signed about 20 copies that were stocked across town at the Fisherman’s Wharf Barnes & Noble earlier that day) and then poked my head into Johnny Foley’s, which was jam-packed.

Thank God for mobile phones with an Internet connection! I googled for other Irish bars and found a place called The Liberties down in the Mission. I cabbed it down there and found a cozy dark wood Irish bar with Newcastle on tap and only a few patrons — a perfect spot for a late dinner and some editing. 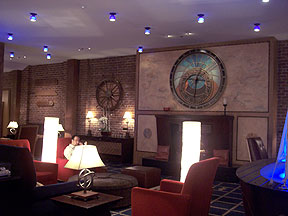 I worked for a couple hours on my new novel THE 13TH (I’m polishing it up to turn into Leisure Books in about a month). Then it was back to the Argonaut Hotel (an awesome place – cool brick and beam rooms with a nautical theme and right by the tourist trap of the Wharf) before a half-day business meeting (and lunch at a Smith & Wollensky’s chain member).

I got home around 11:30 p.m. Wednesday night and went to work the next day… because I then took Friday off to catch up with my family, do some PR work for next week’s signings and finally to head downtown to guest at the Chicago Horror Film Festival for the weekend.