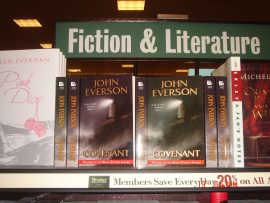 THIS WEEKEND, I took my second “roadtrip” to promote COVENANT… on Friday morning, I hopped in the car at 6:30 a.m. and headed out on I-80 to Indianapolis for a noon signing at the downtown Meridian Street Borders store (which ironically, is housed in a building named “Barnes”!)

It only takes 3.5 hours to get to Indy from here, but there’s a time change, so I had to hit the road early… and I was a little worried about how long it REALLY would take, since I-80 going into Indiana from Illinois had been closed all week until Thursday night — last week’s torrential downpour courtesy of Hurricane Ike had put the interstate highway underwater all week!

In any case, after circling around trying to ditch my car in a labyrinthine underground parking garage for awhile, I arrived at the Borders just in time. The store has an interesting setup — books are in one half, then there’s a small lobby / elevator hall for the office building tenants upstairs, and then the Borders Cafe is on the other side of the elevators. They set me up facing the elevators in the “book” half of the store, which gave me a perfect vantage point for office building traffic. And it also led to Tommy Chong (of Cheech and Chong) asking me where the bathroom was. In typical oblivious fashion, I said I had no idea and suggested he look at the building directory behind him. The guys who’d come out to the signing then informed me that this was half of Cheech and Chong, who were in for a show that night. I guess his red tennis shoes should have tipped me off.

I signed 14 copies of COVENANT during the signing, and had a great time chatting with Maurice Broaddus, Michael West, Jeff Funk and Brian Shoopman, all area writers who came out to hang with me. Special thanks to Jeff, who handled special ops store reconnaissance for me, and ended up passing out a bunch of my postcards in the cafe! And since I forgot to bring my camera for the trip again, I’m glad that a couple of Maurice’s cellphone pix from the day turned out OK: 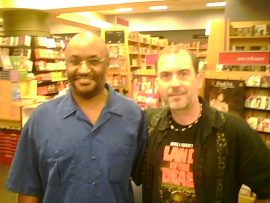 It was mid-afternoon when I headed out again, and did the 90-minute drive down to Cincinnati. After finding the Barnes & Noble on the Kentucky side of the river, I managed to accidentally cross the river back to Ohio and spent the next 20 minutes circling around to get back there…

I stopped at a TravelLodge next to the Aquarium and B&N, and while half the building was without power, (thanks to Ike — large grids of the city were still out of power there from the windstorm they endured) they gave me a room with a working TV and lights. I’d originally intended to head out of town and stay at a cheap Motel 6, but I thought… for $40, staying right next to the bookstore (and the neighboring brewery) was a great deal. Later that night, when I returned and found an occasionally flickering light was all that remained of the “power” fed to my room… I wasn’t so sure.

At the B&N, I set up at a table at the top of the escalator with a slightly diminished stack of books — they’d already sold a handful of the stock that had come in for the signing.

I added some copies of Needles & Sins to the pile and met a bunch of interesting people over the course of the night, from the local man who had come because of the newspaper listing for the event and thought that it might be more of a true “event” with a lecture  (maybe someday!) to the new mother who travels frequently on business to Schaumburg (the town neighboring where I work)  to the mother whose daughter pressed the big red button to sound the alarm and stop the escalator just as I was beginning to sign her mother’s book!

I hung out at the store until about 9 p.m., and sold all 16 copies of Covenant that they had there, as well as 4 Needles & Sins. 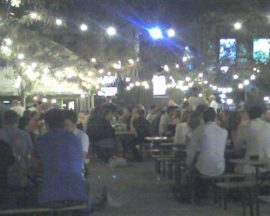 Then I headed across the street to the Hofbrauhaus for a couple tankards of on-premises brewed Dunkel and a plate of schnitzel and sauerkraut (heaven).

I would have had more except by the time I thought to ask for more kraut, the kitchen had closed ?

I worked on some edits to THE 13TH there, before returning to my motel room to find that I was really going to be sleeping in the dark… since there was no power to turn on a light (though the occasional flicker from the wall lamp when a tiny surge of power did make it through was kinda eerie). 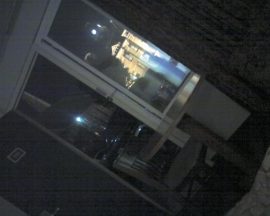 Chalk up another one to John’s ongoing saga of roadtrips of terror … no air conditioning… no screens on the window to leave it open for air… and lights that crackled on and off through the night.

I didn’t sleep that well.

In the morning, I showered in the half-dark, and then drove down to Florence, KY to sign the copies of Covenant that they had in stock (they’d already sold 15 of the 24 they’d ordered, which was cool to hear!)  I also stopped at a Cincinnati Borders that only had one copy, but the manager was really interested in the book and offered to host me for a signing if I swing back that way. 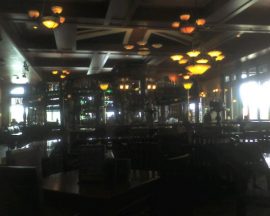 Right next to their store was a place called The Pub, painted all black and advertising 11am – 3pm breakfast on the weekend. I said what the hell and bit — and was glad I did. Piping hot coffee and a melange of mashed potatoes, eggs, bacon, peppers and cheese called “The Blanket” filled in the empty hole from the sauerkraut I missed the night before, and after that I shot out to one more B&N to sign some copies of Covenant before camping out for my official signing at Cincinnatti’s Eastgate Mall Borders for the afternoon.

Over the course of three hours at Eastgate, I sold 23 copies of the book (I left them 1 autographed copy!) which the store manager was very pleased with (she said usually authors sell 5-10 books in an afternoon there).

Again I met lots of interesting people and really enjoyed talking to all of them.  I do hope a bunch of the folks who took a chance on the book because the author was there shaking hands enjoy the novel. The end result of the weekend was 52 copies of Covenant sold (and 9 copies of Needles & Sins), with another 52 copies of Covenant signed and left with “autographed copy” stickers in various stores. And more than 30 people signed up for my monthly e-newsletter mailing list.

At the end of the day, after dropping into a B. Dalton and Borders on the north side of Cincinnati to sign their copies, I had a nachos dinner at BJ’s Brewpub (with a great “Nutty Brewnette”), before driving 4.5 hours straight through (only one bathroom break!) to get home at 11:40 p.m. Saturday night. I woke up this morning still feeling a bit bug-eyed.  But I took Shaun and Geri to breakfast before heading a half hour south to watch our nephew play (and win) a grammar school football game (and then crashing on their recliner to watch the Bears lose miserably).

Overall – it was a great (if tiring) weekend!!!