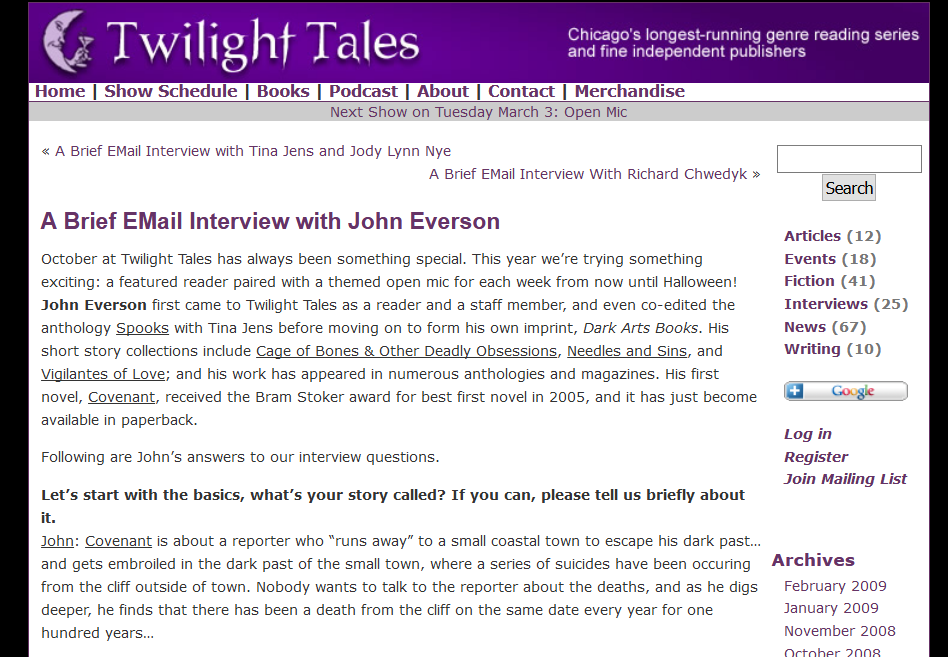 October at Twilight Tales has always been something special. This year we’re trying something exciting: a featured reader paired with a themed open mic for each week from now until Halloween!
John Everson first came to Twilight Tales as a reader and a staff member, and even co-edited the anthology Spooks with Tina Jens before moving on to form his own imprint, Dark Arts Books. His short story collections include Cage of Bones & Other Deadly Obsessions, Needles and Sins, and Vigilantes of Love; and his work has appeared in numerous anthologies and magazines. His first novel, Covenant, received the Bram Stoker award for best first novel in 2005, and it has just become available in paperback.

Following are John’s answers to our interview questions.

Let’s start with the basics, what’s your story called? If you can, please tell us briefly about it.
John: Covenant is about a reporter who “runs away” to a small coastal town to escape his dark past… and gets embroiled in the dark past of the small town, where a series of suicides have been occuring from the cliff outside of town. Nobody wants to talk to the reporter about the deaths, and as he digs deeper, he finds that there has been a death from the cliff on the same date every year for one hundred years…

What inspired your story, or what inspires you to write?
John: Covenant was inspired by a newspaper clipping that someone once handed me that talked about a bar at the top of a cliff in England. Apparently, this was the biggest suicide spot in the country: people would go to the bar, have a last drink and then walk a few yards away and jump.
As for what inspires me to write — inspiration sparks from anywhere. I’ve always written stories and poems and lyrics and I love the way words can take you to a place in a heartbeat that is so far from where you sit now… just by opening a door in your imagination. Writers opened those doors for me as a reader and I want to do the same for others…

Each week in October features a specific genre, tell us what draws you to the genre featured your particular week (Oct. 6, Horror and the Dark Arts).
John: I love the sense of the “unexplored” and “unexplained” and “otherworldly” in horror and dark fantasy; there’s a sort of “anything can happen” feeling that I relish. As a reader, I picked up books because I always wanted to escape into another world — to be transported into a place that was unfamiliar. So growing up, I read a lot about alien worlds because they were exotic and offered wild opportunity and often featured characters with powers and experiences very different from anything we could ever come in contact with. I loved the sense of wonder that those wildly imaginative novels brought. That’s why I don’t have any particular interest in writing horror that deals with real-world problems like a psychological study of a serial killer. I can see that in the newspapers and as a reader I want to escape the troubled realities of this world, not explore them deeper. So virtually all of my horror truly has a dark fantasy element to it – something about my fictional worlds is generally outside the realm of our existence, unless you fully believe in ghosts, or erotic creatures who can suck away memory, or taxidermists who embalm people in a way that immobilizes them yet keeps them conscious forever or boys who perform the unspeakable and in doing so create an all-consuming pumpkin queen.

What sorts of books do you find yourself seeking out when walking the aisles of bookstores and libraries?
John: Fun, fast, can’t-put-’em-down ones. At least, I used to. I haven’t “sought” a book in a store or library in years at this point. I run a small press, Dark Arts Books (www.darkartsbooks.com) and proof books for other small presses (Necro Publications and Cemetery Dance). So manuscripts are always turning up on my door — I don’t go looking for them because I have no free time to read beyond what is already sent to me!

Any advice you’ve been given as a writer that’s either very good, or very out there that you would like to share with us?
John: Getting up at the mic at Twilight Tales is a very useful way to test your fiction — it allows you to listen with fresh ears to what you’ve written in a way that you’ll never be able to repeat sitting at your computer at home. By watching the audience’s reaction, and hearing how easy or difficult the phrases are to read out loud, you’ll know where the “soft” spots are in your prose, and conversely, where to “tight” bits are that should be left alone when you go back to edit.

Anything else you’d like to share about your writing or upcoming publications/events?
John: Covenant is, of course, out now and for the next few weeks I’m dedicating all my free time to a book tour to promote it. Sacrifice, the sequel, will be out from Leisure in June of 2009. This summer I finished a new unrelated novel called The 13th, which I’ll be turning in to Leisure this month (I’m doing some final proofing and edits now). That will be out in 2010, I would imagine. I’ve also got some short fiction due out any day — I just finished co-writing a Halloween tale for Doorways Magazine with Gary Braunbeck and JF Gonzalez, which will be out in October. My novelette “In Memoryum” should be out in the next few weeks in the Dark Hart anthology Fearful Symmetry, Deadly Beauty. And another novelette, “Fish Bait,” which [I] wrote after a visit to some of my old CyberPsycho’s Magazine friends in Denver a couple years ago, will be out soon in Cutting Block Press’s Horror Library Vol. 3 anthology.
Anyone who wants to check in about my projects, read some free fiction or check out some of my horror-related art and music can visit www.johneverson.com where you can also read my blog and signup for my monthly e-newsletter. Thanks for interviewing me about my “Dark Arts”!

We hope you’ll join us on Monday October 6th at Mystic Celt (3443 N. Southport) to hear John’s fiction (along with open mic fiction in a Horror and Dark Arts theme), and perhaps more discussion!

This interview originally appeared on the Twilight Tales website but is reprinted here since the website no longer exists.