World Horror Convention 2003 – Rain and Hail but no Snow 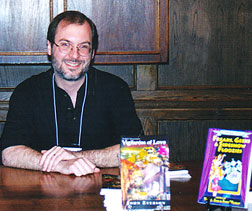 KANSAS CITY’S World Horror Convention seemed a much calmer con in many ways than past instances, perhaps because it was raining and hailing outside most of the weekend, or perhaps because a lot of key players were absent — old friends like P.D. Cacek, Gerard Houarner, Linda Addison, Shane Ryan Staley and GAK, among many others, couldn’t make the con. But it still was a good time.

My wife Geri and I got to spend many hours catching up with Jim and Charlee Jacob and Dave Barnett (publisher of Necro Books), as well as chatting with Ed Lee, Loren Rhoads and Mason Jones, Geoff Cooper and Jude Feldman and Alan Beatts from San Francisco’s Borderland Books.

I also got to introduce Geri to Del from Dark Delicacies bookstore. A couple years ago when I was out in L.A. and promoting my last book, he gave me a driving tour of West Hollywood after I came to visit the store, a totally unexpected and incredibly generous gesture! Anyway, here’s a sketch of our weekend in KC, most of which will be of no consequence to anybody but me. But hey, it’s MY online journal.

Geri and I opted to do a road trip to KC, since it is only 8 hours from Chicago (9 with lunch and dinner stops). We got in late Thursday afternoon, dropped off some boxes of books to the Twilight Tales crew and then got back on the road to visit my brother, who lives in KC. By the time we got back from dinner at Hereford’s and an evening with him and his wife, we were pretty wiped out, so we skipped CowThulu’s Casino and got some sleep. 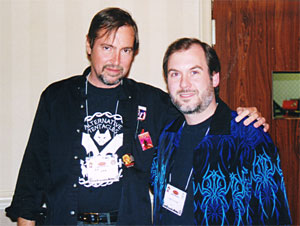 Friday was my busiest day at the con; in the morning we took a quick trip through the dealer’s room and art show, caught Charlee Jacob‘s reading from Haunter (a haunting section!) and then I had a couple of pitch sessions scheduled with publishers. We stopped in at the “Overlooked Masterpieces of Horror” panel with Ron Horsley (who had some cool computer art in the Art Room) and Alan Beatts. Gary Braunbeck turned up and graciously filled in for the other two missing panelists. After the panel, I got to meet and talk to Gary for a bit; I just finished copyediting his upcoming collection for Earthling Books, so it was great to finally meet him. The book – Graveyard People – is excellent. Buy it. Trust me.

At 2:30 I had a reading scheduled, which more or less marked the “debut” of my new collection from Twilight Tales Books, Vigilantes of Love. Twilight Tales Executive Producer Tina Jens brought copies of the book, as well as of the Twilight Tales anthology Freaks, Geeks & Sideshow Floozies (which I appeared in last year). Her husband Barry, fellow Twilight Tales vet Bill Breedlove, Jim and Charlee Jacob, Danielle Naibert and a couple others stuck around as I read “The Right Instrument” and the title story from the volume.

After the reading, we hung out with Dave Barnett in the Dealer’s Room for awhile and tried to figure out which piece of art I REALLY needed to bring home. Then we caught dinner in the hotel with the Jacobs and headed down to the mass author signing. 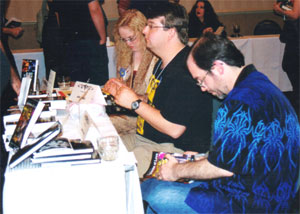 Tina set up the Twilight Tales table at the front of the room during the mass signing with herself, John Weagly and me. You couldn’t miss us, especially if you were trapped in Laurell Hamilton‘s signing line. I signed a couple copies of Vigilantes and several con books before the night was through. I also talked a bit with Ed Lee, who gave me a blurb for Cage of Bones & Other Deadly Obsessions, and Teri Jacobs.

Geri got a great picture of Jim Jacob with Laurell Hamilton, who had a signing line that stretched out of the room, down the hall and around the corner outside. She also took shots of me with Ed Lee, Michael Laimo and Karen Taylor. 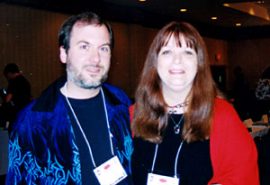 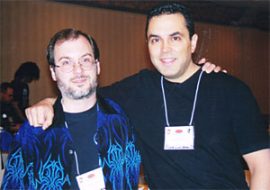 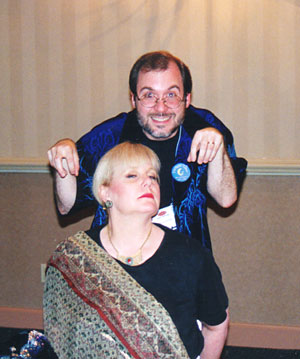 Probably the best moment of the night was when Matt Schwartz from Shocklines came up to me, shook my hand and said something like “you’re an excellent author” and instantly wanted to buy and stock a bunch of signed copies of Vigilantes of Love. (He’d been very successful in the past moving copies of my first collection, Cage of Bones.)

After the Mass Signing, we headed up to the Twilight Tales/Borderlands party for a couple hours with Dave Barnett and Charlee and Jim. Then it was off to the Twilight Tales Flash Fiction Contest. I read “Anne’s Perfect Smile,” but wasn’t at all chagrined not to win — there were a couple of great pieces from Adam Pepper and others that deserved the nod. Bill Breedlove did a fine job MCing, and judges included Trey Barker, Ed Bryant and Ann Laymon.

After the contest, we went back to the TT/Borderlands Party, and wiled away the night with much Jack Daniels and conversations with Robert Walker and Bill Breedlove. Sadly, I didn’t have my camera in hand for either the contest or the bared butt spanking session that ensued at one point during the party.

After enjoying three nights of the Borderlands all night Speakeasy parties at WHC2002 in Chicago, the one-nighter at WHC seemed just too short. But by 4:30, I had to call it quits and get some sleep!

Somehow I revived before noon and had my coffee and a late breafast of “Booberries” in the con suite, and then sat on a panel with Ace Books’ Ginjer Buchanan, New Genre magazine’s Adam Golaski and novelist Matthew Warner on “How Not To Look Liked A Dweeb” when submitting your fiction to editors. I was on the panel for my stint as a fiction editor for Dark Regions. The panel went well — I was worried the panel might bottom out after listing the important basics of manuscript submission format, but I think we actually had more to say than time allowed — and I learned a thing or two myself about the novel submission process from Ginjer.

Then I was off to do my book signing for Vigilantes of Love at the Borderlands Books table, where I spent some time catching up with Loren and Mason and getting indoctrinated into the underground hit of the con – “Happy Tree Friends.” Borderlands was selling a DVD of the twisted cartoon, as well as shirts. I got both.

Meanwhile, Geri and the Jacobs had been talking with Michael Slade about his adventures in Africa, which apparently made them all hungry —as soon as my signing was done, we caught a quick lunch and then went to a roundtable on “The Next Big Thing,” where Charlee, James Dorr and others discussed the advent of print on demand, PDA downloads and the potential death of the paper book (nobody believed that this could really come to pass).

I bought a couple of books in the Dealers Room, and then picked up a print in the art room that I’d been looking at last year, and then, after some time in the Art Show Reception, we decided to brave the hurricane outside and try some authentic KC barbecue. Charlee, Jim and Geri all piled into our car and we drove through sheets of rain to a little hole-in-the-wall called The Smokebox, which turned out to be awesome (despite the fact that my hair was still dripping into my baked beans when our food came). By the time we got back, we’d missed the IHG awards announcements, but we saw some of the “Night Foolery” theatre troupe’s amusing horror-oriented vignettes. 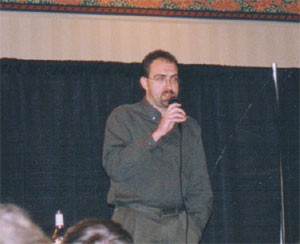 Then came Brian Keene‘s “Family Hour,” which he started by strutting into the room to the sounds of Rob Zombie’s remix of “Brickhouse” accompanied by a bunch of “go-go” horror gals (two of whom stripped off their shirts to show chests covered only in duct tape. Brave!)

Keene opened his hour with a monologue skewering many of the editors, writers and publishers in the audience. After his “standup routine,” he read a story that continued the WHC tradition of ribbing Geoff Cooper about his baseball cap while also serving as a tribute to Richard Laymon.

Then came the Gross Out Contest, which Keene MCed. I was glad I opted not to be in the contest this year — the competition was the sharpest I’ve seen, and it was a nice change to just sit and enjoy it, without “performance anxiety”! It was hysterically vile throughout and featured a great array of judges, including Dave Barnett, Michael Slade, Mark McLaughlin and Ed Lee.

John Turi paraded his”Stork,” which won him an award last year. The stork was truly the most memorable piece of his performance.

Charlee pulled Jim onto the stage to act as sidekick as she sang a grotesque little song, and Joe Konrath offered a truly disgusting menu of inedible dinner plates, but the hard competition in terms of purely gross descriptions came from Wrath James White, who took second to Cullen Bunn‘s equally gross first. 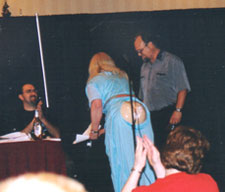 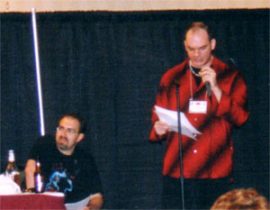 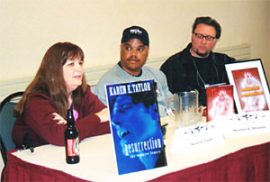 Gary Braunbeck suggested that we go to Forest Ackerman‘s “Tell Us A Story, Uncle Forrey” hour, and I’m glad we did. I’ve never seen Ackerman before, and he had a wealth of amusing stories about Hollywood B-Movies, Isaac Asimov, A.E. Van Vogt and more. But at the end of his session, we couldn’t deny it anymore; it was time to pack the car and run around the Dealer’s Room to say our goodbyes.

Overall, a good con. Though I don’t think the hotel wanted us near its restaurant on Easter Sunday morning. We ate with the Jacobs and Jim scared off a roving Easter Bunny with his House of 1000 Corpses t-shirt and a butter knife. The bunny didn’t come back to bother us 🙂

Geri and I capped it all off by having dinner during the drive home at a Hooter’s in Davenport, Iowa.

Easter Sunday dinner in a Hooters…ahhh…truly the sacred and the profane…priceless.