Cage of Bones & Other Deadly Obsessions 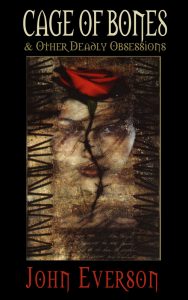 “John Everson has to be congratulated for having the courage of his nightmares. Not every writer would be able to convert his most freakish and kinkiest imaginings into neatly plotted narratives as Everson does here…Can you say ‘the Stephen King version of American Pie‘?”
~ Paul DiFilippo, Asimov’s Science Fiction Magazine

“Yellow”
The cave held the seed of ancient gods…their vacation provided the climax of despair.

“Long Distance Call”
There are some calls you should never answer.

“Cage of Bones”
It was beautiful. After weeks of preparation it was finished. A full body restraint. Made of steel. Wood. Leather. And bones.

“Dead Girl On The Side of The Road”
Her body was his, unchanging, for 25 years to enjoy whenever he chose.

“Pumpkin Head”
She held the browning vine up from her belly, and with squeamish understanding, he dug through his clothes for his pocketknife.

“Direkit Seed”
Her name was Ceiran, with a C. She sang sexy Barry Manilow songs and worked in a club. And she was a witch.

“When Barrettes Brought Justice To A Burning Heart”
The derelict with the milky white eyes promised revenge, and that was something Bill wanted more than life itself.

“The Mouth”
The defining evidence that separates sex and murder is really only the amount of blood left behind on the bed.

“Creaks”
Sometimes the most frightening parts of growing up are the discoveries of our own nature.

“Remember Me, My Husband”
Ella Marie had been dead for 100 years when she gave him her ring.

“Wooden”
“Tonight,” she promised, “I’ll be back. I’ll bring some matches. We’ll have a bonfire, you and I. Dead wood burns best.”

“Swallowing The Pill”
Some pills get easier to swallow…with practice.

“Broken Window”
In giving him entrance to her soul, had Katrina given too much?

“Tomorrow”
He was a bored child prodigy who could use his will to make his pets and parents do whatever he chose. What will he do tomorrow?

“Mirror Image”
The mirror reflects his true nature. Or is it someone else?

“Murdering The Language”
Gretta only wanted to protect the library’s patrons from smut and filth. But some lessons in literature are painful.

“Anniversary”
Margaret lived for the nights of the full moon. And she wanted this night to be perfect; it was their first anniversary.

“The Last Plague”
When nothing else is left, what is there left to lose?

“Bloodroses”
She was blinded by lust and razored by marriage. But at least she had the thorns of her rose garden to soothe her.