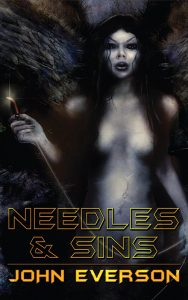 Tales beyond the darkness!

Roses scented with bitter deception, Oracles redolent in hidden redemption, a body-mod-obsessed ingenue with an amputee fetish and a demon gone soft on a bitter angel. Dreamcatchers, an alternate Nativity with a pimp God and a non-compliant Mary, Stupid Bitch the three-legged cat and the secret explanation of how Germany almost won the war with the devil on their side. These are just a few of the provocative sets in these 19 stories rife with “Needles & Sins”…

Includes “Letting Go,” a Bram Stoker Award Finalist, as well as five stories that received Honorable Mentions in the Year’s Best Fantasy & Horror anthology series:  “Spirits Having Flown,” “The Beginning Was The End,” “The Strong Will Survive,” “Something Inside” and “You Never Got Used to the Needle.”

Love & Sex & Rope & Screams: A Circus in Five Acts
And Then Some
After the Fifth Step
Birth and Death
You Never Got Used to the Needle
Irrelevant in Anathzebra

About the Author
Afterword (added to the 2021 edition)

Needles & Sins was also released in a Polish edition by Replika Books with the cover below. 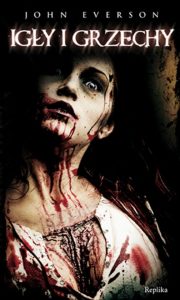