SEATTLE’S WORLD HORROR CONVENTION 2001 has come and gone. Can it really be over already? I’m gonna miss names and events, I know, but here’s my scattershot recollections of a loaded weekend, more for my own future memory benefit than anyone else’s. Thanks to Sephera Giron, Judi Rohrig, David Norhaus and Monica J. O’Rourke for catching me on camera during some key moments of the con, and allowing me to post those pix here!

For me, the weekend started Friday afternoon with a walk around the Dealer’s Room and hello’s to some old friends — Dave Barnett of Necro Publishing, Patrick and Honna Swenson from Talebones, Andrea Dubnick from Twilight Tales (who scored my first purchase — the Chicago reading group’s latest shirt has an irresistable Alan Clark illustration).

I also quickly got to put names to faces of e-mail friends like Brian Keene, Chad Hensley and Mark McLaughlin and the Lone Wolf Publications gang of Brian Hopkins, Kristy Dark, Judi Rohrig and Garrett Peck. Brian quickly tagged me with a real mortuary “toe tag” (I wore it on my wrist) and gave me a peek at the Bloodtype anthology that I’ve got some work appearing in. Bloodtype debuted at the convention (sadly sans cover…the cover art was still en route to a couple authors for signing). Hopkins also hosted a CD-ROM demo of Lone Wolf’s line of CD-ROMs that afternoon, focusing on Personal Demons, a collection of real life author stories. 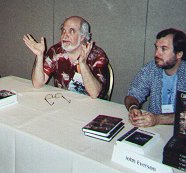 I caught Charlee Jacob‘s beautifully dark reading excerpt from her upcoming Leisure Books novel Soma, and later, following a Personal Demons signing, hooked up with her and her and husband Jim for a prime rib dinner (wherein Charlee learned the danger — or advantage — of ordering well done prime rib…you can resole your shoes with it).

I sat on my one panel for the weekend Friday night — The Eros and Thanatos panel was led by Paula Guran and M. Christian, and also included Tananarive Due and Alexa deMonterice. It was a real ego boost to hear an audience member there volunteer that he’d read my Cage of Bones collection and loved it! A stop at the Leisure Hours party followed, where I talked with Mark McLaughlin and Gemma Files and picked up a copy of her latest chapbook.

More Coffee. Stoker nominee Larry Santoro and Andrea Dubnick are at the table next to me. Quiet discussion of Larry’s brief television writing career … more coffee.

OK, ready to roll into it again. I pitched a novel project to the Dark Tales folks, Keith Herber and David Nordhaus, and then took another round through the Dealer’s Room (god, there was lots of stuff in there I wanted to buy).

After a trip through the art show with the Jacobs (wherein I made the decision to pick up a print of Alan Clark’s “I Become My Resting Place”) it was time to settle in for my own reading slot. I enjoyed some of Gemma Files’ reading before Dave Barnett pulled me aside to introduce me to the man behind the pseudonym Doc Solammen. Doc’s book Tangy Bonanza will launch Dave’s new Bedlam Press imprint this summer. I copy edited Tangy earlier this year, so it was a kick to meet “Doc” and his lovely significant other (this is the worst test for me — I don’t remember my own friend’s names sometimes, let alone new acquaintances…but…back to our story).

I slipped back into the reading room for another of Larry Santoro’s energetic, dramatic readings from his mythical Bluffton series, and then it was my turn. Larry and a handful of other nice folks (including small press publisher Carlton Mellick) played guinea pigs as I settled in to read “Sacrificing Virgins” from the Delirium Books anthology The Dead Inn. It seemed to go over well enough, and then I shifted over a chair and watched the room FILL to capacity (and pour into the hall) for Brian Keene’s partial reading of “Earthworm Gods,” from his story collection No Rest For The Wicked. Wished I could have captured some of Brian’s audience! 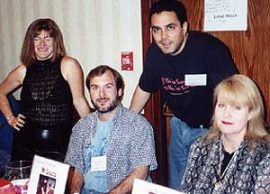 The day moved on quickly from an autograph session at the Lone Wolf Dealer’s table for Bloodtype (with Teri Jacobs, Michael Laimo, Charlee Jacob, Brian Hopkins, Judi Rohrig and more in attendance) to a Mass Autograph session wherein I didn’t exercise my wrist much, but did get the opportunity to sit and talk with horror legend Robert Weinberg (Bob lives a mile or two down the street from where I grew up, but I’d never had the opportunity to meet him back home).

Then it was strap-on-the-tie time for the Stoker Awards banquet. I joined the Twilight Tales table for the dinner, including Larry Santoro, Robert Weinberg, Andrea Dubnick, Twilight Tales leader and 2002 WHC Chair Tina Jens, her husband Barry, Barbara Ferrenz, Karen Taylor, and Bill Breedlove. Between Weinberg, Santoro, Taylor and Tina and Andrea, the table had five Stoker nominations, but the highlight of the evening was probably Andrea’s bold corralling of the statuesque Gigi Phillips and her mother to come meet “the boys” at the table who’d been peeking across the room at them. A few bottles of wine probably didn’t hurt anyone’s bravery or spirits (we think we won the Stoker for most fun table) and helped cushion the blow when no haunted house statues made their way to our table.

The Virtual Stoker — a live Internet chat room reporting on the events of the evening and engineered by First Novel Stoker winner Brian Hopkins — was projected on two screens on either side of the room, and was a unique addition to the awards banquet (though I seemed to be the only one at our back of the room table whose contacts augmented his sight enough to be able to read the scrolling conversations taking place there).

After the Stokers I slipped into the Morbid Curiousity open mic and then grabbed a banana split with MC publisher Loren Rhoads and husband Mason Jones at Denny’s. We supplemented the ice cream with alcohol back at the hotel bar, chatting it up with Rain Graves, GAK, Dave Barnett and others, and then checked out the con suite, where I talked a bit with Mark McLaughlin and Teri Jacobs and got some very well-mixed Jack and Cokes from Borderlands’ best bartender, Jude Feldman.

Could you really fit any more into a day and night?

Everyone was moving slower on Sunday, but I started the day with an infusion of coffee at the con suite and then a novel pitch meeting with Don D’Auria of Leisure (thanks to Brian Keene for a kind introduction!)

Then I met with Darren Floyd of England’s Razorblade Press in the Dealer’s Room for another business discussion.

The afternoon belonged to an off-site signing at Seattle’s Elliott Bay Bookstore. We knew we were in trouble when the bus dropped us off and we saw the event was advertised in the window of the store on a hastily scrawled brown paper bag.

The descent down a stairway, through a deli and into a backroom where some tables were set up for us only confirmed the fear that a lot of signing and selling for the 40 authors was probably not going to happen.

It didn’t. I counted three old ladies over the next two hours, and a retired husband who professed that he “didn’t read mysteries.” On a positive note, I sat with Mary Ann Mitchell, who regaled me with tales of the research she undertook to put together her Marquis de Sade vampire books, released through Leisure. I bought a copy of the first one, Sips of Blood, and knowing the background of the book made it an even more enjoyable read on the plane ride home.

“Merriment” ensued when the bookstore staff told Mitchell that they weren’t interested in having her sign any of her books for them to display, because they’d be sending back all of the materials they’d ordered for the signing. She took it well enough, but when Ellen Datlow got the same treatment, she pointed out that there was a big gap on their shelves in the anthology section where copies of her Best Year’s Fantasy and Horror were likely to be returned at the end of the day.

After returning from Elliott Bay, I hooked up with Dave Barnett, GAK and the Jacobs for dinner where I earned a nickname I won’t be encouraging, thanks to Charlee’s pea soup. Then it was off to see the performance of Circus Contraption, which turned out to be one of the true highlights of the weekend. Their combination of top notch acrobatics and juggling with a mood of the macabre was disturbingly beautiful. Picture a twisted circus dreamed up by Tim Burton with a nod to Cabaret and music by Nick Cave and the Bad Seeds and you’ve got an idea of this delightfully dark troupe. 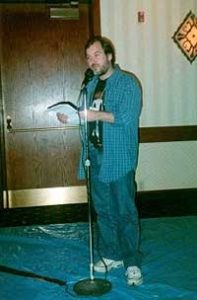 And then it was time to prepare for the annual Gross-Out contest.

Michael Laimo borrowed my copy of The Dead Inn to read an excerpt from his story “Snuff’s Enough” and with a little urging, Charlee decided to take the leap and read a snippet of the Soma chapter she’d read from earlier in the weekend.

Peer pressure caused me to foolishly toss my name in the ring as well, and I chopped down a section of “Sacrificing Virgins.” Vincent Harper brought his girth to “bear” and enforced the 4-minute rule on my reading, but Charlee and Michael ended up completing their readings and placing 2nd and 4th respectively, in competion with Carlton Mellick, Geoff Cooper, Rain Graves, Edo Van Belkom and winner Brian Keene who washed down a cup of worms with a cup of audience collected saliva…did anyone actually hear the story he read behind this audacious display (it involved fecal fellatio, I recall)?

The authors of WHC2001 then gathered on a hill behind the hotel for a group picture, and Jim Jacob and I joined a small group to watch an independent movie adaptation of Richard Laymon‘s In The Dark. While some of the acting and scripting was less than pro quality, the story was intense and kept my eyes open (despite their protests) until 3 a.m. Kelly Laymon told me later that the film was shot in Chicago, and is soon to undergo a slight ending revamp.

A last trip around the Dealer’s Room for goodbyes. Can it be over so soon?

I unloaded $100 worth of books (copies of Cage of Bones and The Dead Inn) to dealers and a fan, said goodbye to the Jacobs and Dave Barnett and GAK, finally met Gothic.net reviewer Mehitobel Wilson, and then made my way to the bar for a final round with Brian Keene, Michael Oliveri, Geoff Cooper and others.

Louis Maistros, who I’d passed all weekend without having a chance to chat (he even had a table by me at Elliott Bay), got my last handshake and then it was off to the airport for the endless ride home.

On the flight, I started thinking of ideas for next year’s Gross-Out Contest. After all, it’s only 11 months away….