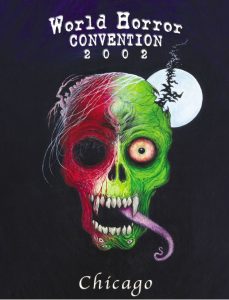 SEATTLE MAY BE just a memory now, but Chicago looms just around the corner. Yep, the 2002 World Horror Convention is in my backyard, and over the summer I volunteered to help out with its organization. Consequently, this weekend I found myself sitting down with a spreadsheet figuring out what will be appearing in the souvenir program book for the con…and who will write it! WHC 2002 Program Book Editor, that’s my new title! I’m looking forward to it…I haven’t had the chance to really “put together” a book before, despite having years of experience doing magazines, so this should be fun.

Not a lot to report about new fiction sales over the past couple months. “Stars on the Beach,” a story I wrote specifically for Delirium Books’ The Dead Inn 2 anthology was accepted there (whew!) The story actually was written in longhand partially on a beach — between 11 p.m. and 1 a.m. on Miami Beach in February. I didn’t finish it until last month, however. That’s the only recent sale to report.

In other Delirium news, my story “Sacrificing Virgins,” which originally appeared in The Dead Inn , recently won a bout in the first tier of a Delirium-sponsored round-robin style “gross-out” contest (the story garnered 76 votes. My competitor, Eric S. Brown, pulled in 45). I’ll likely be submitting another Delirium-published tale for the second round of the contest, which begins October 1.

My story “Mutilation Street” came out early this summer in Bloodtype , a Lone Wolf Publications CD-ROM anthology, which also features a “theme song” that I wrote and recorded for the disc. Check it out:

Publisher Brian Hopkins liked my music enough that he asked me to score future Lone Wolf titles…the result of that is that I’ve signed on to do music for Lone Wolf’s upcoming Carnival CD-ROM anthology.

My story “Anniversary,” was sold as a reprint awhile back to the Tourniquet Heart anthology, which was originally due out this year from the publisher of Nasty Snips (where my story “Mirror Image” first appeared). Tourniquet Heart has been delayed however, until 2002. The good news is that it has been picked up for wider distribution (in both hardcover and softback) by Prime Books. Two of my stories appeared over the summer in the subscription-only web-based magazine 1000 Delights. “When Harris Wished For Rain” appeared in the June issue and “The Humane Way” appeared in September.

I will be celebrating the Halloween season by participating in two special shows put on by the Twilight Tales gang next month: