TWO SALES TO REPORT: A story I wrote specifically for the Twilight Tales anthology Freaks, Geeks and Other Sideshow Floozies has been accepted for the book. “…And Then Some” will hit the streets when Freaks debuts at the 2002 World Horror Convention. I also recently placed a story called “The Strong Will Survive” in Space and Time magazine. Look for that to appear in a year or so. In other news…I’ve survived the first two rounds of Delirium Books ‘ “Gross-Out” contest, and a new story is currently in competition in the third round of that round robin style tournament. Check it out…if you dare! 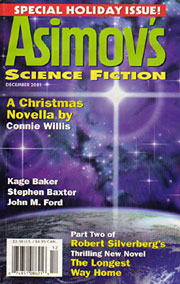 A Cool Review: In its December 2001 issue, Asimov’s Science Fiction magazine ran a short review of my fiction collection, Cage of Bones & Other Deadly Obsessions. Here’s what it said:

John Everson has to be congratulated for having the courage of his nightmares. Not every writer would be able to convert his most freakish and kinkiest imaginings into neatly plotted narratives as Everson does here. In Cage of Bones and Other Deadly Obsessions (Delirium, hc, $29.00, 190 pp.), Everson plonks down a platter of twenty bloody psychosexual gobbets-almost half not previously published-with revealing introductions about his methods and goals. Just one example of the kind of material on display here: “Pumpkin Head” concerns the masturbatory Halloween habits of a young lad and the unlucky consequences of his defilements. Can you say “the Stephen King version of American Pie”? –Paul Di Filippo