TAXIS ONLY SHOW UP early when you’re not ready. Otherwise, they’re late when you really need to be… on the road!

This morning, my cab was early. He sat in the drive as I pulled my son’s socks on for him since mom was in the shower, gulped a half cup of coffee re-warmed from yesterday’s unemptied pot, and downed a Claritin-D. And then I was off to O’Hare Airport on a Sunday morning… and got there in half the usual time, which means I really could have slept in longer…

How could I have a late start after a week of “staycation”? I could blame Nina Kiriki Hoffman, since I started her latest novel Fall of Light last night and read too late. Or it could have been because I seemed to fill every hour of every day last week with busywork, from putting up the Christmas lights early to planting flower bulbs to clearing out my office to recording about 30 hours of my favorite Internet radio station in preparation for its end of the year demise. More on that in a minute.

I’m in Northern California now, and within two hours of getting off the plane I’d rented a car, stopped at three San Francisco bookstores to sign their copies of The 13th, and driven across the Golden Gate Bridge.

I’m on the west coast for a business meeting on Tuesday morning. So why am I here on Sunday? Well, I figured that Monday I wouldn’t be at work since it would be a travel day  to be here for Tuesday morning… and given that, I decided to come out a day early on my dime to drive up the coast and spec out some of the area I’m planning to use in my next novel.

Tomorrow afternoon I need to be back in the city to do a booksigning at the Borders in City Center, at 845 Market Street, but this afternoon, after stopping at a couple stores, I drove across the bridge, stopped and took the requisite tourist self portrait and then continued up Route 1 which snakes its way around a series of hills bordering Muir Woods and Muir Beach along the ocean for a good hour before it begins to even out a little. I didn’t count on it getting dark here so early (the sun was gone before 5:30) so much of the view I came to see will have to wait until the drive back in the morning. 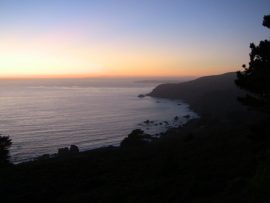 I stopped and had a Boont Amber Ale at the Old Western Saloon in Point Reyes and sought in vain for an It’s It ice cream sandwich at the local grocery before driving another hour through some eerie stands of redwoods in the dark before coasting through Bodega Bay, opting to continue on a few more miles to see what Jenner was like (tiny!), and then ulimately heading inland a few miles to find a nice room complete with microwave, TV, DVD player, fridge, coffeemaker, futon and fake fireplace at the Rio Villa Beach Resort. I wish I could stay here a week!

Heck, they even have Wi-Fi, which was a relief. The darker it got as I drove, the fewer radio stations came in. At the end, in Jenner, the only station I got was a talk radio program interviewing military officials about the mistreatment of war prisoners. I definitely had begun to get the feeling that I had left civilization. And then when I stopped to price a B&B in Jenner, I walked through a room of people all dressed in period costumes from the ’20s (some kind of private party). Had I stepped into the Twilight Zone?

The place did NOT have 1920s prices though, which is why I ended up in Guerneville.

It was a great relief once I got my room to turn on the laptop, hook into the net and turn on my favorite internet radio station, Auralgasms. Suddenly the dark and silence and Twilight Zone vibes all disappeared, and I was back in My zone. I only wish I could hear the station in stereo — my left ear has been completely blocked since I got off the plane. Talk about being locked inside your head. I can tell you about internal echoes…

I’ve listened to Auralgasms pretty much exclusively now for 4-5 years, so you can imagine my horror when I tuned in a couple weeks ago to hear that they had started a countdown until the station goes off the net!

What am I going to do when THAT happens? The whole world will suddenly feel like my left ear right now… or Jenner: isolated, dark, remote, disconnected.

Maybe I didn’t need to drive up here today after all. I could have just waited six more weeks and experienced the emptiness in my home office when I turn on my computer to find my musical heartbeat gone.