Don’t try this on the Golden Gate

OK, FOR EVERYONE who’s never gotten to walk or drive across the Golden Gate Bridge… this one’s for you. I’ve done both now (it’s much easier to drive it!) On my way back to San Francisco after exploring the small seaside towns of Jenner and Bodega Bay an hour or two north of there, I decided to film my re-entry to urban sprawl. Can’t beat the soundtrack that just happened to come in on cue from the radio, either!

Here’s the leadup to my “Golden Gate” video: After flying from O’Hare to SFO and picking up a rental car early Sunday afternoon, November 15th, I drove to a couple of San Francisco bookstores to sign their copies of The 13th. Then I headed north out of the city on Route 1 (detailed in a previous blog). 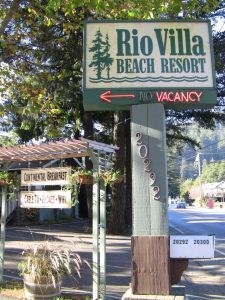 I woke up on Monday, November 16 in a small but beautiful motel resort called Rio Villa in Guerneville, CA. I would love to spend a week writing there; in the morning I woke up to find a gorgeous view off the back balcony of a fog-wreathed river and a lower patio surrounded in flowering trees and bushes. I sat on the wooden deck furniture, drank my pot of coffee and used the wi-fi to plan my route for the day.

As I was leaving, the owner, Ron Moore, surprised me with a gift for the road. He’d read my blog from the night before (I’d mentioned when I saw him off the balcony that I’d blogged about what a great place he had).

Ron asked me to hang on for a second after I paid the bill for the night. He ducked into one of the cabins, reached into a freezer and when he came out, presented me with an It’s It ice cream sandwich (if you read my last blog you know that I’d been looking for one the day before!)

Talk about sealing the deal… if I ever get back up that way, you know where I’m staying! 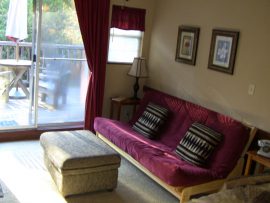 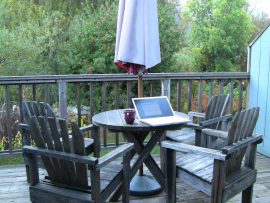 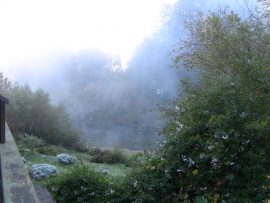 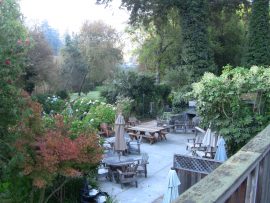 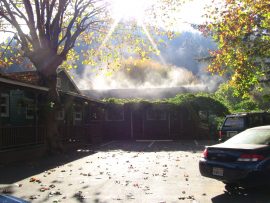 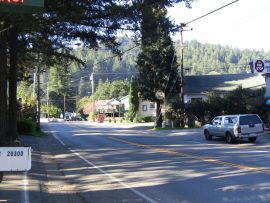 After I left Rio Villa, I drove up to Jenner to see the tiny town in daylight (I’d driven through it in darkness the night before), and was treated to some beautiful views.

The locals live high above the estuary where the Russian River meets the ocean, and many of the roads are single lane “goat” paths with houses dug into the cliff beside. It was quiet and peaceful up there, and I really didn’t want to leave… especially when I spotted the sea lions sunning themselves on the silt where the river meets the sea. 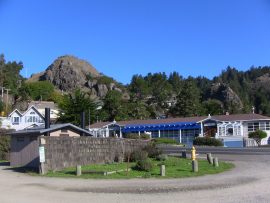 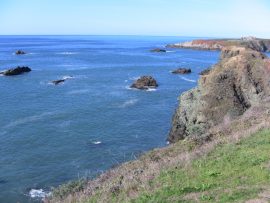 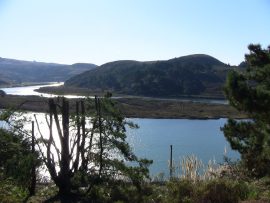 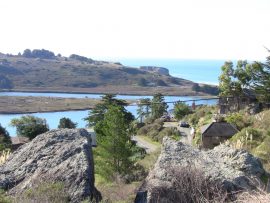 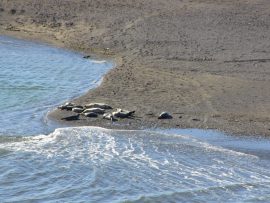 But the morning was getting on, so I finally left Jenner and drove down to Bodega Bay, where Hitchcock’s The Birds was filmed. I  took a few pictures of surfers just outside of town, and bought my son a dragonfly “spinner” kite at Candy & Kitesbefore heading inland towards the 101.

I grabbed a great homemade cup of clam chowder for the road at the Valley Ford Market, and 30 or 40 minutes later, I jumped off the 101 when I saw a Borders Books on the side of the road in San Rafael. I stopped in and met a couple of the managers and signed a couple copies of Covenant and Sacrifice… but the store’s shipment of The 13th wasn’t in yet. 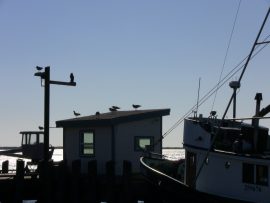 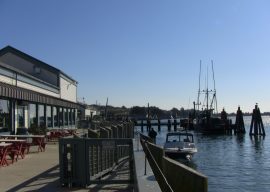 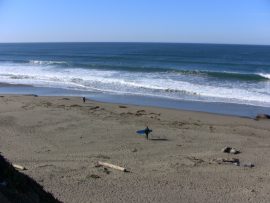 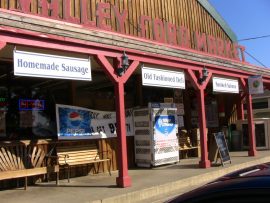 After leaving the Borders, it was a race to get across the Golden Gate Bridge and through the city to get my car back to the airport rental car place on time. I made it with barely a minute to spare and then took a shuttle back to the city to check in to a cool room at the Argonaut Hotel (in the old Cannery at Fisherman’s Wharf).

I quickly stowed my stuff and changed before heading down to the San Francisco Center Borders Books to do a signing.

It was great to be back at that Borders (I signed Covenant there last year) and I ran into a number of interesting folks there before I called it a day and walked back to my hotel via the insanely steep Nob Hill (where I found a mint It’s It bar!! Score!!) I stopped at the venerable City Lights bookstore along the way and had dinner at a streetside Italian dinner in North Beach, before walking back to the room.

The next morning I did what I was actually SENT there for – participate in a 5-hour meeting for the dayjob… and then it was back to the airport for the long flight home. Talk about a whirlwind trip of experiences!

When I got home just before midnight that night, I found a couple treats waiting — the DVD of The ZomBeatles movie (which I saw at ZombieCon and promptly ordered) and a copy of Loren Rhoads’ Morbid Curiousity Cures the Blues, a book of amazing true stories culled from the late Morbid Curiousities Magazine. I was pleased to see they used my blurb at the top of the book’s first page – it reads:

“It’s a cliche that truth is stranger than fiction, but this compendium of real-life accounts of the bizarre, horrific and just plain freaky proves it. Heartfelt, heartaching and heart-attack fare all, these stories will haunt you long after the last twisted confession is told.”

Check it out — this one’s worth a read! Several, really.

Just a couple days after I got home, I drove down for another manic signing weekend to Indianapolis, Cincinnati and Louisville. But that’s another story…