Home The Horror Life A SIREN, a Brick Path and a Shed…

A SIREN, a Brick Path and a Shed…

ON FEBRUARY 2, 2009, I started writing my fourth novel, Siren, in my usual “writing night” haunt at Rizzo’s in Naperville, IL. Six months later, on August 3rd, I finished the final chapter in my usual spot – booth #11 – at Rizzo’s.  In between were many writing nights at Rizzo’s, as well as many early 6 a.m. mornings writing  in my home office before heading to work, and late nights in a candle-lit basement, with the Cocteau Twins providing the musical atmosphere. From hard start date to hard finish date, this was the fastest novel I’ve completed;  while technically Sacrifice was written in just over three months, I took a two-year break in between writing the first half and finishing the second.

But writing the last chapter of Siren in August wasn’t quite the end of it. For the past six weeks, I’ve been editing the novel, and three very generous friends also took cracks at copyediting the manuscript. I got the final bit of their edits last week, keyed in all of the corrections and then gave the book a final read-through myself again (and still made little nitpicky changes on every other page.)  But it all came to an end at midnight, Sunday night. I keyed in my final edit (and actually changed the final line of the book) and yesterday morning, I turned the manuscript in to Leisure.

I’m really proud of this book – I think in some ways it’s my most personal novel to date as it deals with one of the most critical fears of fatherhood. Of course, now  that I’m finished with it, I’m anxious to hear what readers think! But it’ll be a bit of a wait for that though – the book is slated for release at the end of July 2010 (though there may be a small press edition a few weeks or months ahead of that… stay tuned). 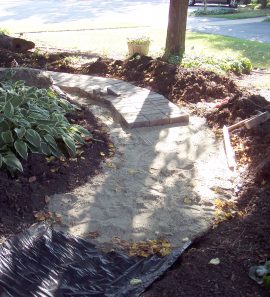 a) I was working on finishing SIREN and…

b) I finally got outside for the first time in the past year since COVENANT was released and really worked in my yard.

Seems that a few things had suffered in my absence as I’ve been running around every weekend since last August to promote COVENANT and SACRIFICE in bookstores.

Last month, I didn’t schedule any crazy bookstore jaunts, and instead, over the course of August, I took a load of discarded bricks that the previous owners had left stacked against our wooden shed and built a garden path from the front of the house around to the side.

It’s freakin’ amazing how much work dropping a few bricks on the ground turned out to be!!!

Because you don’t just drop bricks. 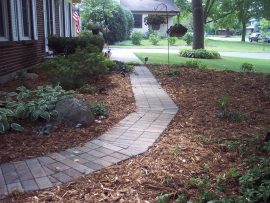 You dig out an indented path (which proves difficult when there are hundreds of tree roots!) and then you sand it down, and level it, and lay the bricks and cut the bricks to accomplish curves with a saw – seriously, with a saw! – and then you shore it all up with wooden edging to keep the bricks from moving before you fill it all in with dirt….

After I finally finished that month-long project, I shovel-edged all of our garden beds and laid 80 bags of cedar mulch (we have a lot of garden beds!) around the house.

Then, over the past couple weeks, I attacked the shed, which was deteriorated when we moved in 2.5 years ago, and has definitely gone downhill since. Sadly, I didn’t take any pictures of the rotted out structure BEFORE I began painting and restoring it but following is  a post-paint picture. 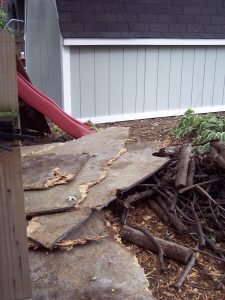 First I drowned the outside in some fresh paint, and then this past weekend I ripped out the old rotten floor (which had foot-wide holes in six places in it!) and then replaced it with new board.

Then I shored up all the rotten spots in the walls with new wood before painting the whole floor to protect (and hopefully preserve) it.

Tonight I started putting all the crap back IN to the shed. I am still not completely done – I need to lay a brick area outside of it and then stack up the firewood I’ve been collecting.

But thank god… the catch-up-on-the-yardwork project is just about over for this year.  Just in time to hole up in the office for the winter and write some new fiction!

Here are a couple shots of the flooring project: 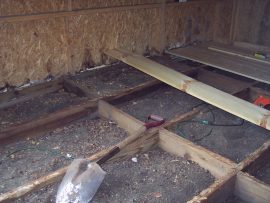 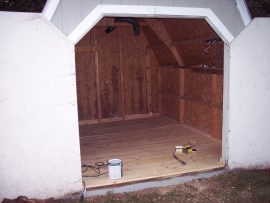 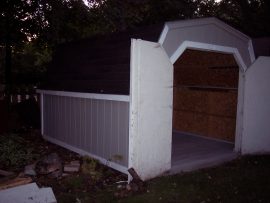 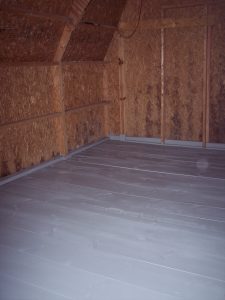 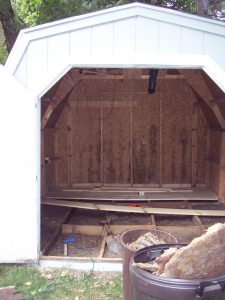