Home Pinball One crazy week… anchored by a Meteor

One crazy week… anchored by a Meteor 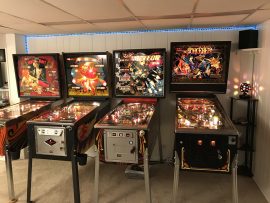 SO LAST WEEKEND, I got home late Saturday night from a work trip to Vegas. But I didn’t stay put for long. After a one-day rest, on Monday, I rented an SUV and drove four hours to Ann Arbor, Michigan.

Meteor is a pinball table that I’ve been looking to add to my basement mini-arcade for the past couple years. There were a lot of them produced back in 1979 by Bally — over 8,000.

And there is a strong secondary market for pinball machines, so if you know where to look, you can find them for sale. I’ve seen several Meteors for sale on the pinball forums I frequent over the past couple years but the problem has been they were either too far away, or too beat-up looking to consider.

Then, a couple weeks ago, a guy in Ohio put one up for sale that looked pretty good! And after going back and forth on email for a few days and looking at various pictures of the glass and playing field… we made a deal. He had to pick up a game in Ann Arbor, which was a least an hour and a half closer to me than where he lived… so we made an arrangement to meet at one of my favorite places in Ann Arbor — the Jolly Pumpkin Brewpub.

I got there early so I could enjoy lunch and get a little writing time in. 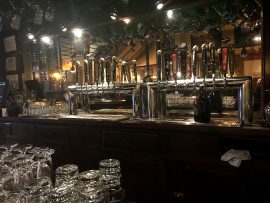 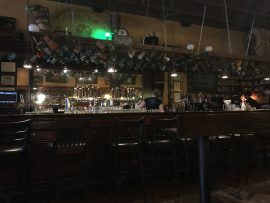 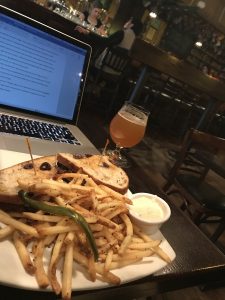 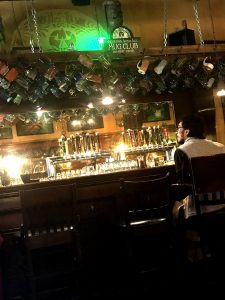 And a couple hours later… we transferred the machine from one vehicle to another and I was driving home with a nice example of one of my favorite old-school pinball games!

That night, my friend Chris got pressed into service to help me unload it, get it down the stairs to my basement and put the legs and head back on. But there are a lot of wire harnesses that need connecting in the top and bottom of the game when you separate the head and the base to move it, so the next night, the guy who sold the game to me Facetimed with me and guided me to connect all the right things to the right places. And we were up and running!

Chris came over and helped test it out, as well as drain the growler of a sour pale ale I’d grabbed at the Jolly Pumpkin. 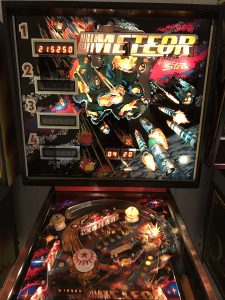 The week ended with more moving and traveling. And a continued pinball theme. Our good friends Brad and Sandy Czernik (Brad got me into the pinball hobby) are moving about 45 minutes north of here to the edge of Chicago, so on Friday we had dinner with them at a favorite local haunt and then on Saturday… we helped fill and unload their moving truck.  So it’s been a crazy busy week, and today I feel muscles today that I haven’t felt in years.

It’s hard to shoot a video and play pinball one-handed, but here’s a glimpse at the table in motion!