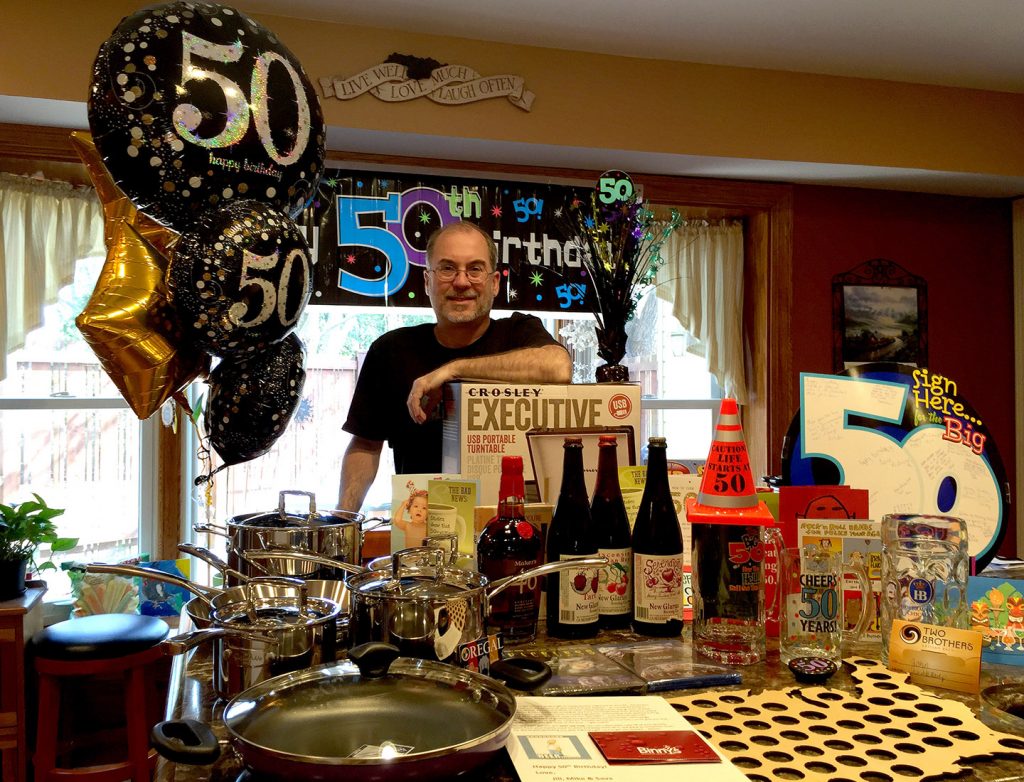 IT IS AT TIMES like these when I realize how lucky I am.

On Monday, March 14, 2016, I turned 50 years old. And for the past week, I have been showered with love and gifts from friends and family. It’s left me humble and happy in equal measures. I didn’t need the gifts (which were nevertheless awesome!) but it’s good to know that people care.

I have to be honest… I was not looking forward to turning 50 years old this week. There were moments a month ago when I wondered if I was actually going to make it to the big day. But I have to say, it wasn’t nearly as distressing to me as turning 40 was. I spent 20 years as a newspaper pop music columnist… and as such, I was entrenched in youth culture throughout my 20s and 30s. I also once entertained illusions of finally finding a group of musicians who would help develop the songs I wrote into songs heard on the radio by more than 5 people.  So turning 40 was the hard one for me… because that’s when I really had to admit that I was too old to go anywhere in the music industry and I was starting to be visibly older than most of the people who were standing next to me at the concerts I covered for the newspaper.

But I’ve had 10 years to get over that… so this week? I enjoyed celebrating the new milestone, and didn’t get too maudlin about the grey hair that goes with it. Hell, I’m not dead yet, right?

The party started Monday night when I got home to find Geri and Shaun waiting for me with the kitchen decorated in balloons and a banner and a stack of gifts waiting. Geri bought me a gorgeous stainless steel cookware set that I’d been admiring in Sur La Table a few months ago. After saving all of my fiction/book income for six years so that we could rehab our kitchen last fall… now I finally have a great set of pans and pots to cook in it!  After I opened their gifts, we went to dinner at J. Alexanders, a restaurant that I have picked for “special occasions” for the past 20 years… they have a moneyback guarantee on their prime rib, and for good reason. Their food is amazing. 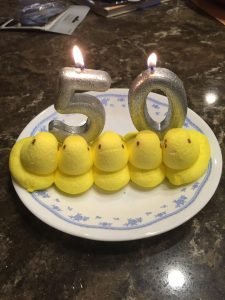 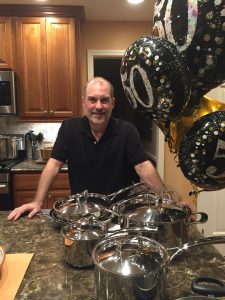 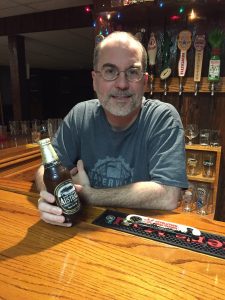 At the end of the night, I went downstairs to my home bar and pulled out a bottle of Austral Yagan Dark Ale that I have been saving for a special occasion for the past three years. I packed it in my suitcase and brought it home from a business trip to Santiago, Chile back in early 2013. It seemed like as good an occasion as any to finally close the last chapter on that trip!

A couple nights later, New Order was playing The Chicago Theatre. I’d tried to get tickets on Ticketmaster when they first went on sale… and couldn’t get through their impossible online ordering system to get two seats. 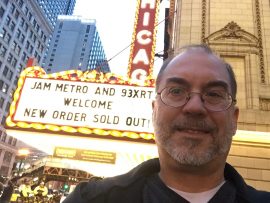 And then after a bad attack in February, I ended up scheduled to have gallbladder surgery just three weeks before my birthday… so for a while I wasn’t even sure that I was going to be recovered enough for the concert anyway… I’d given up on going.

But the Chicago Theatre is one of the best venues in the city, and I’ve wanted to see New Order since I was in college… so… when my recovery went well, and I found that there were still some good re-sale tickets available, on the night before the show, I took the money my dad sent me for my birthday, and bought a ticket on Stubhub (Geri couldn’t go at that point). Best decision I’ve made in a long while. I got a 12th row aisle seat and was nearly in tears when they played “Your Silent Face” early in the show, from their Power, Corruption & Lies LP, a disc that defined college for me.

I posted a YouTube Playlist with a handful of the songs I recorded at the show that night. You can watch them here. 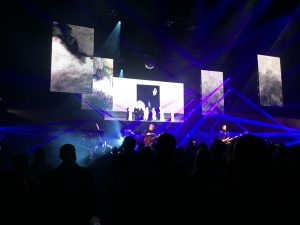 It was an emotional night for me that came at just the right time – reliving the music of college and beyond, while realizing just how far the world (and grey hair) has moved on since the days when I first fell in love with that music.  I took some time after the show and sat at the Elephant & Castle across the street from the theater to have some bar food and a beer for dinner. In those moments, I wished that I could press the rewind button, both to watch the concert again, and to go back in time to those days when I still thought I might “be” something. A rock star. A writer for Rolling Stone or Spin. An award-winning novelist… Ok. So I did get somewhere. But I still want to see one of my books adapted on the big screen!

Anyway… it was a good night for contemplation and self reflection.

And you know, the musing on 50 was way easier than the fist-in-the-face that 40 was. It still smarts though. Who wants to be old? Who wants to be beyond their prime? Sure, there are years left (hopefully) and lots of opportunities still. But there are also many that are gone; things that can never be now that the river of days and weeks and years has swept them away. That was driven home during the New Order show when I looked around and saw virtually everyone there was over 40. And Bernard Sumner, the lead singer? Looked like Jedd Clampett without the hat. Jeez. When did we all get so old? When that music first caught us, we were young and vibrant and looking ahead at a world of possibilities. Now we’re paunchy, balding and looking at our 401Ks with trepidation.

But it’s not all bad. The up side of being on the second half of life’s pendulum is that you’ve got a lot of experience. And usually more cash (and credit) than when you were 20. I worry about the future… but maybe not as much as I used to. And you know, I can decide to splurge and spend money on scalper’s tickets to New Order. Or go out to eat three times in a week to celebrate my encroaching age! I couldn’t have done that 30 years ago.

On Friday, Geri and Shaun and I picked up the celebration again, and went to Nevins Brewing Company, one of my other favorite places (best burgers ever!) for dinner.

And that was just the prelude to Saturday night, when a couple dozen people took over an exceptionally long table at the Hofbrauhaus in Rosemont, IL to really pull out the stops for my big 50th Birthday Celebration. I’ve been to the Hofbrauhaus in Cincinnati and Las Vegas, and to the original one in Munich (one of the highlights of my life, honestly). It was good to introduce some of my friends to one of my favorite places. And we had a great time. 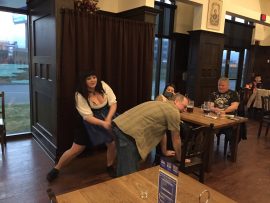 Early on, someone bought me a shot… which at the Hofbrauhaus means you have to bend over and get a paddle to the ass after downing the liquor. I took my shot and my punishment, and then enjoyed a stein of Dunkel while standing on chairs to toast with the German band.

The table was a cross-section of the relationships of my life; Geri and Shaun were there, of course, my dad and stepbrother and his family were there, and Geri’s dad and sister Jill and their spouses came. My friend Larry, who has been with me since high school was there with his life partner, Lisa… Dave Benton, one of my longtime writing pals from Wisconsin drove down… and my more “recent life” friends from my current neighborhood, Brad Czernik and Chris Brook and their wives came out. 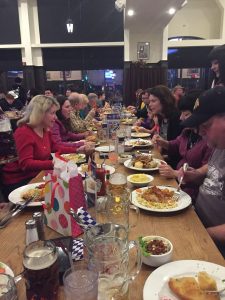 There was much food, and frivolity… and at the end of the night, I decided to give the Stein-holding contest a go. It’s a Hofbrauhaus tradition: A bunch of guys all stand at the front of the band stage and hold out heavy, full mugs of colored water (they wouldn’t waste beer!).

The deal is… if your elbow bends… you’re out. I’d done it once before a year or two ago and placed 3rd. This time around, I reached 3rd again… and at that point was thinking that I wasn’t going to get farther again.

But then the guy to my right gave it up. I suddenly had renewed hope. It was just me and the guy to my left… but he looked rock solid. I could feel my whole arm shaking like crazy, but I did NOT bend. I would not give in… It was a battle of wills that I really didn’t believe I was going to win but… 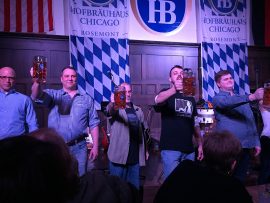 All of a sudden guy-on-the-left let his arm drop and voila… I was the victor… and winner of a big glass Hofbrauhaus Chicago stein (which is a nice match for my Cincinnati and Munich steins!) Credit it to aged determination over youthful braun.

A perfect end to a perfect evening.

But now the party’s over.

A week of dinners and 5-0 birthday cards and balloons and all the rest have run their course. I wish the balloons said 3-0… but they don’t. I’m a little slower than I was a decade ago. I don’t have the manic energy I had when I crisscrossed the Midwest on book tours back when Covenant and Sacrifice and The 13th came out in mass market paperbacks seven and eight years ago. But… there are still things I want to do. Books I want to write. People I want to spend time with.

So it’s time now to get on with the next decade. I hope I come out the other side of the 50s in better shape than I did the 40s (which I ended with first hernia surgery and then 12 months later, gallbladder surgery!) 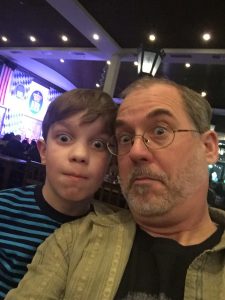 One thing’s for sure… no matter what we do while above ground, we’re all going to end up in the same place… below ground. I intend to drink a lot more beer, hear a lot more music and enjoy a few more landmark birthdays before the Reaper comes for me.

Cheers! Or… to stick with the German, 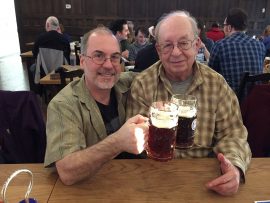 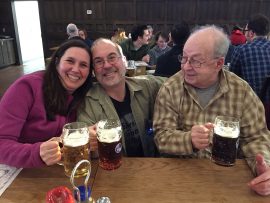 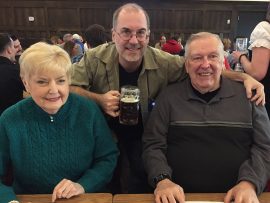 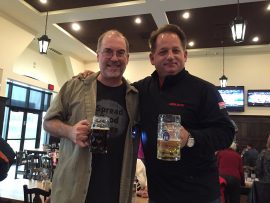 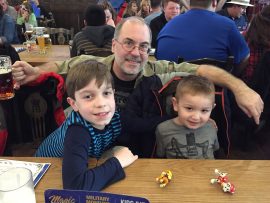 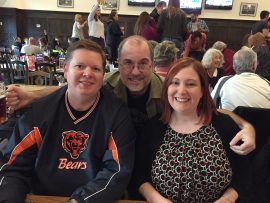 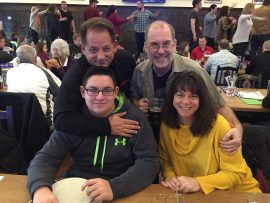 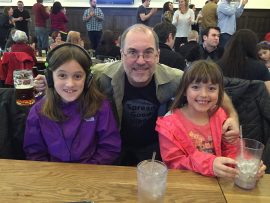 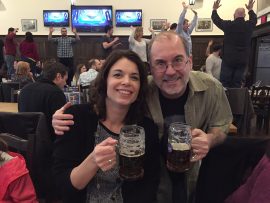 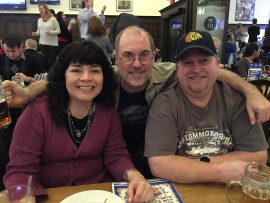 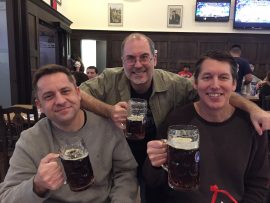 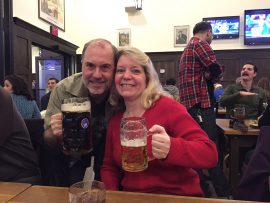 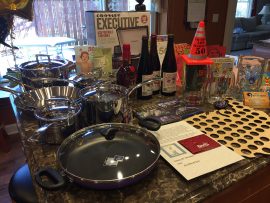 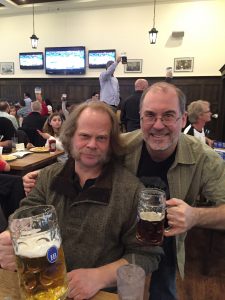 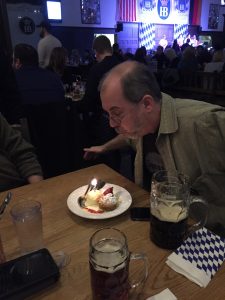 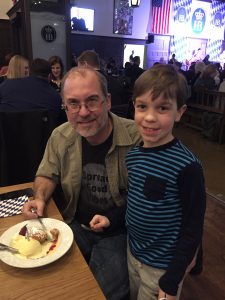 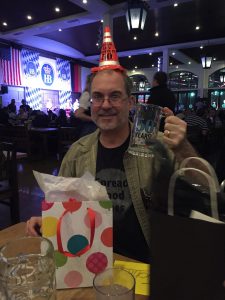 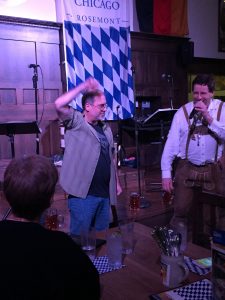 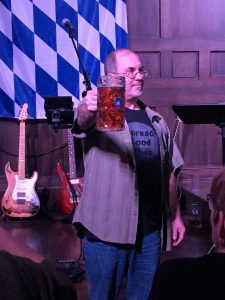