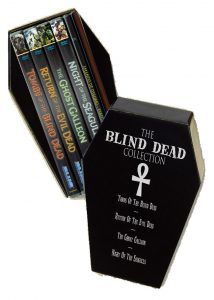 FANS OF THE “Creature Feature” movie genre and European horror from the ’70s and ’80s, in particular, are no doubt at least vaguely  familiar with the Blind Dead series of films from Spanish director Amando de Ossorio.

I have a huge collection of Euro-horror DVDs and have seen the Blind Dead films referenced for years in various descriptions, comparisons and reviews, but only this month did I finally buy and watch them over the past two weekends. And I got the cool “Coffin Collection” from Blue-Underground to do it… highly recommended!

Aside from the four films, it includes a short documentary DVD and a nice 40-page booklet about the films. 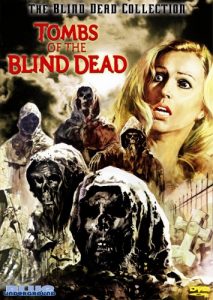 The original film, TOMBS OF THE BLIND DEAD introduced the bloodthirsty, cowled skeletal Knights Templar who were blinded and killed centuries ago for their perverse bloody crimes… but now rise to seek the lives of those who stumble upon their abandoned monastery. The first film (watch the original Spanish version, not the shorter English dub!) is a wonderfully slow-building horror film, and the first “rise” of the ghoulish knights from their graves is perfectly shot.

De Ossorio hit upon this film just as horror in Spain (and around the world) was taking off. Paul Naschy and Jess Franco were already brand names in Spain producing independent horror films despite the repressive political regime, and De Ossorio’s creepy knights soon put his name alongside theirs as the Blind Dead became popular worldwide. They were an original creation — not quite zombies, not quite ghouls or vampires or mummies… but with elements of all of those film monsters. They were familiar, yet different… and they sparked a chord. Over the next four years, de Ossorio would shoot three sequels, and all of them are worth seeing for old school horror buffs. While they repeat certain situations (women end up raped or molested and seem to get their heels caught in stairways and rubble while trying to escape a lot), they don’t, thankfully, stay in the same locale and repeat the same film. The skeletal knights of each film appear in markedly different situations, (one assumes these were various separated segments of that original condemned group?) and even the story of how their eyes were blinded changes by the movie. There are no continuing characters besides the knights — it’s as if the director hatched four completely different stories that just all happened to include the same monster. 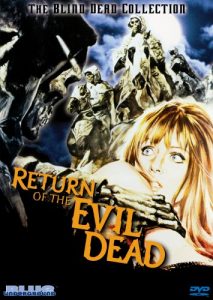 The first sequel, RETURN OF THE EVIL DEAD focuses on a rekindled love between a woman about to be married into “privilege” and a wanderer who comes, not quite accidentally, to her town. I loved this setup because for once, the female lead is not some young, beautiful nubile thing with great lungs, but rather, an older, gone-to-seed woman who has some real issues to confront. Not your usual choice for a horror lead.

The love triangle here lends a different focus to the film, which is plotted very differently than the first movie — it drops the “slow build tension” of the original in favor of a constant action format. Here the knights return on the night celebrating the anniversary of their deaths to take revenge on the town. Ultimately, a cast of oddball, at-odds characters are holed up in a church trying to find a way to escape. I loved the ending on this one, which brings back some of the spooky atmosphere factor of the original. 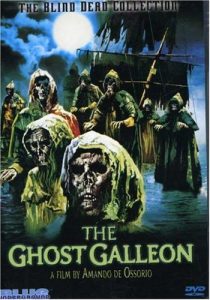 The next sequel, THE GHOST GALLEON, goes in yet another direction. This time around two models are cast adrift on the ocean as part of a publicity stunt, and stumble on a mysterious ghostly ship adrift in fog (where there should be no fog). The girls disappear into the bowels of the ship separately, and then their eventual rescuers spend the second half of the movie trying to dispatch the knights without much success. This film probably has the worst flaws of the four — there’s a segment where a woman is manhandled and tied up to prevent her from going to the police… until the stunt models are returned. Well… why WOULDN’T she go to the police once released, regardless of the return of the models, for the abuse she suffered? And there are a couple of really bad “toy ship” camera shots (imagine those early Godzilla movies with the toy trains crashing). Obviously, the effects budget was minimal. But the ghost galleon is really creepy-looking for most of the film and there is some genuine eeriness. 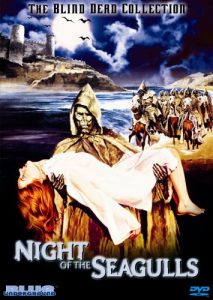 The final film, NIGHT OF THE SEAGULLS is probably the darkest one in tone — when a young doctor and his wife arrive to take over a doctor’s practice in a remote ocean-side town, they are not welcomed by the close-mouthed townfolk… who are in the midst of a weeklong ritual to sacrifice their young women to the knights… who come each night to accept their “sacrificial virgin” victims in exchange for not decimating the rest of the town.

If you love slow-building, old-school Euro-horror — which despite the “slow” factor was typically a bit edgier than American productions of the same period (hence, the heavily edited versions of a couple of these films when they were imported) definitely check out the Blind Dead collection if you aren’t familiar already. The coffin set also includes a documentary on Ossorio which is short but enlightening. If you’re a “behind-the-scenes” film buff like I am, it just makes you wish that more attention had been paid to archiving his films and his story before his death in 2001. Check the set out here: