Home The Horror Life A New Website for a New Year!

I’VE PRETTY MUCH  DEVOTED every spare minute of the past month to redesigning this Dark Arts Web site, which went live this week. I didn’t realize til I dug in that I had about 70 pages of content lurking about through various subsections on the site, so it took a lot longer to pour everything into the new format than I anticipated! (Geri started to wonder if she still had a husband somewhere). If you never saw the “old” site, here’s what I laid to rest next to the new look: 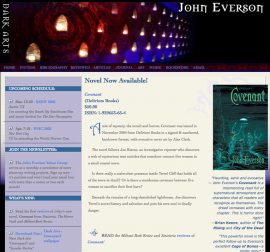 I liked the old “black” Dark Arts site, but there was a lot of text on it, and white text on black is not the easiest to read. It looked like this screenshot for a couple years, so it was time for a change. Plus, for the Webgeeks in the crowd, I was really using the 2005 redesign as an excuse to learn a new coding methodology — complete design via CSS. Lots of people use CSS to format their text, but the entire shape and design of this site is driven by a single stylesheet… there is only one page of content on this entire site now that has a “table” holding the content (brownie points for anyone who finds it, LOL.)

This site has some new Reviews of my novel Covenant, samples of my fiction, archives of my horror movie and “dark” music columns for various publications (see the “Articles” section) and much more.

Also, this week Twilight Tales posted my  Poe-esque story “The Tapping” from the Spooks! anthology  on their Web site as a free sample  to encourage people to buy  the book.