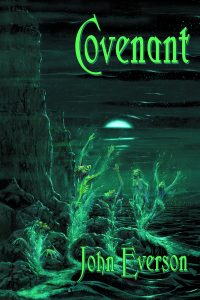 What a month. Yesterday, the Horror Writers Association announced the Final Ballot for the 2004 Bram Stoker Awards — and my novel Covenant (Delirium Books) was nominated in the “First Novel” category, along with Black Fire by James Kidman (Leisure) Move Under Ground by Nick Mamatas (Night Shade Books) and Stained by Lee Thomas (Wildside Press). It was also announced that my publisher, Delirium Books, will receive the 2004 Specialty Press Award for its contribution to the horror genre.

I had a flurry of e-mails from my friends in the genre yesterday; I’m truly honored that Covenant  appears on the ballot and want to publicly thank everyone who read and recommended the book…this is an amazing honor! I’ve been lucky to have works appear on the Preliminary Ballot for the Stoker Awards in the past, but this is the first time my work has made it to the Final Ballot.

Over the next  few weeks, active members of HWA will vote on  horror works in a variety of categories , from Novel, First Novel and Anthology, to Short and Long Fiction. The 2005 HWA Annual Conference and Stoker Banquet will be held in Los Angeles, June 24-26 at the Hilton Burbank Hotel & Convention Center.

At the moment, I’m gearing up to attend the World Horror Convention  in New York City this coming weekend, April 7-10. If you’re attending the con, I hope you’ll come to my reading on Saturday night, April 9 at 7:30 p.m. I’m not exactly sure what I’ll be reading yet — possibly an excerpt from Covenant  or possibly my new short story “The Strong Will Survive,” which just came out this week in Space And Time Magazine #99…or…both!  I’ll also be at the WHC mass autograph signing, participating on a panel on “Building a Fan Base” and moderating two other panels — one on “A Career in Short Fiction” with Ellen Datlow, Gary Braunbeck and more and another on “Starting a Small Press” featuring the founding publishers from Necessary Evil Press, Earthling, Twilight Tales and more. My full schedule for the con is on my home page: www.johneverson.com/appearances/.

In addition to all this fiction activity, I spent eight days in March in Austin, Texas, covering the South By Southwest Music and Film Festival for The Star Newspapers. After seeing nearly 20 films and almost 40 bands, I dragged myself home, a media sponge dripping with oversaturation! My articles on the event ran in The Star over the past couple weeks, but you can read my coverage with extra pictures on my “Pop Stops” archive Web site at www.popstops.net.