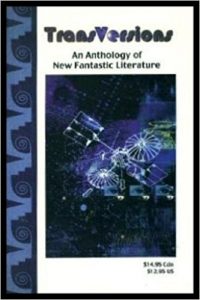 IT’S BEEN A GREAT week for my mailbox!

I received my contributor’s copies of the new Canadian TransVersions anthology, which puts my short story “Calling of the Moon” in the company of fiction by Nebula Award winners Robert J. Sawyer and Bruce Holland Rogers. The book also includes fiction and poetry from Jack Fisher, Rebecca M. Senese, Denise Dumars, Steven Sawicki, Nancy Bennett, Don Hornbostel and many more.

For ordering information and photos of the “launch” of the anthology at Sci-Fi World (near Toronto) over Thanksgiving weekend, check the TransVersions web site.

This week I also received my hardcover contributor’s copy of t. winter-damon & Randy Chandler’s Duet For The Devil, which I copy edited over the summer for Necro Publications.

Last month, I gave a reading of “Dead Girl On The Side of the Road” and “Bloodroses” at the Twilight Tales fiction reading series in downtown Chicago, which went well. Both stories are from my new Delirium Books collection Cage of Bones and Other Deadly Obsessions, which has received a couple of recommendations for inclusion on the preliminary ballot for the HWA Stoker Awards (as has “Bloodroses”). I was nervous before doing the reading, but once at the microphone, with a silent room seeming to hang on every word (and laughter that came at all the right places during “Dead Girl”), I relaxed and really enjoyed the experience.

I will likely be giving another reading there in February 2001. I will also be promoting the book early next year as a guest on an AOL Writers Club “Writer to Writer” chat and at The Stars Our Destination book store in Evanston.