The June Horror releases from Samhain Publishing this month are my novel NightWhere and Jonathan Janz’s House of Skin. So to celebrate our newfound status as the June standard-bearers of horror,  Jonathan and I decided to trade blogs today. You’ll find a post from me over at Jonathan’s place.  And here’s his entry (and one of the first guest blogs I’ve ever hosted):

It’s an honor to be on John Everson’s blog. I’ve been a visitor of his site for a good while now, and I’ve been enjoying his fiction even longer. And before we go any further, let’s get one thing out of the way… 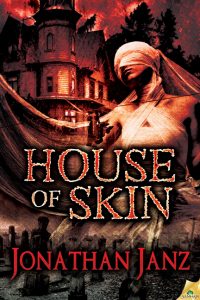 I’m going to share with you a list of my top five favorite “ferocious supernatural female” books in horror fiction, and one of the novels I’ve decided to omit is Mr. Everson’s outstanding SIREN. My reasoning was that I read it after I’d written HOUSE OF SKIN (on sale now!), and it therefore had no influence on my novel. Which is another unifying theme in this list—every book in some way helped shape my second novel.

Now…the books that are on the list (below the cover of my new novel HOUSE OF SKIN):

You’ll find my comments on these novels short, but that’s because I’ll be counting them down on my blog later in the summer and will save my unabridged windage for then. For now, however…the list: 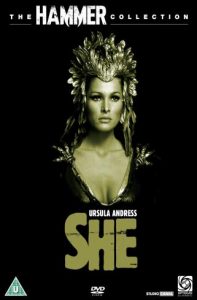 Honey Ryder after a good toweling off

Who knew Ursula Andress played Ayesha back in the sixties? Okay, so maybe some of you knew that, but I sure didn’t, and if you think I got on Netflix and began to search for this film the moment I learned of it, you might be right.

This book isn’t as old as the Old Testament and its Lillith (who, by the way, plays a crucial role in my third novel THE DARKEST LULLABY, due out from Samhain in early 2013), but it’s still one of the grandaddies—er, grandmammies of the sub genre. H. Rider Haggard wrote this tale well enough that it’s still in print 125 years later. Like some of the writers of his day, Haggard’s narrative style can distance the reader from the story a bit too much (I prefer my authors to stay out of the way), but that doesn’t alter the book’s status as a seminal depiction of an awesome and fearsome female entity that both attracts and terrifies the men who encounter it.

For any horror fan, SHE is required reading. 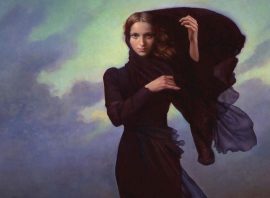 This isn’t Matheson’s best, nor is it even in his top five. But that’s the problem with a writer as great as Matheson—people forget that on a bad day he’s still far, far better than most writers will ever aspire to be. And EARTHBOUND is a good sight better than many horror books that folks consider paragons of the genre. 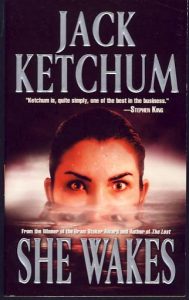 I’ve spoken about Ketchum a hundred times over the past several months, so anyone familiar with me won’t be surprised by his inclusion on this list. Like EARTHBOUND and Matheson’s body of work, SHE WAKES is widely considered a minor entry into the Ketchum canon. That’s more a comment on Ketchum’s incredible bibliography (when you’ve written stuff like THE GIRL NEXT DOOR and OFF SEASON, people tend to raise their expectations for your work) than it is on the novel’s quality. Also problematic for some readers is the supernatural nature of this yarn, which marks a bit of a departure for Jack Ketchum, who usually dabbles in real-life horrors.

But I love SHE WAKES. And the primary reason for my love, as you might have guessed, is his fearsome goddess. She’s a perfect manifestation of female power unleashed, as well as a sinister foil to the vivid Greek setting Ketchum draws. If you forget your other experiences with Ketchum’s novels and take this one on its own merits, I think you’ll find the experience very rewarding.

2. John Farris’s ALL HEADS TURN WHEN THE HUNT GOES BY 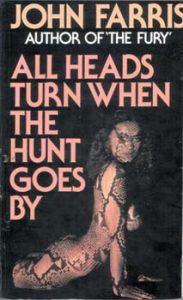 This one has just been re-released (by Crossroad Press, I believe), and contemporary readers who’ve never taken the plunge into Farris’s nightmarish world are in for a treat. The novel, which sports one of the best titles in horror history, is bookended by a pair of scenes of such raw, nightmarish ferocity that they’d make the novel memorable all by themselves.

But the reason this book clocks in at number two on my list is that everything in between the aforementioned scenes is awesome too.

Farris is a muscular writer. He has a stunning command of the language, as well as a phenomenal grasp of form. Basically, there’s nothing he doesn’t do well, and for my money, this is probably his best book.*

(*Of course, I haven’t read SON OF THE ENDLESS NIGHT yet, and I’m told that one is a towering example of great storytelling. But until I do, ALL HEADS TURN WHEN THE HUNT GOES BY will remain my favorite book by one of my favorite authors.)

Oh, and the woman at the novel’s center is a beast.

This is my favorite horror novel ever, so is it any surprise that Eva Galli/Alma Mobley/Anna Mostyn is my favorite ferocious femme on this list? There was a movie made from this novel, and despite the brilliant source material and the all-star cast (particularly Fred Astaire, who deserved better), the film doesn’t really work.

The woman at the dark heart of this novel represents every terrible secret every man has ever harbored. She is the WRONGED WOMAN, and her wrath is boundless. No matter how kind a man tries to be, chances are that at some point he will do or say something to a woman that he will come to regret. This means that the dread invoked by Eva/Alma/Anna is well-nigh universal and absolutely inescapable. When she appears in Straub’s masterpiece, she induces gooseflesh and shudders. But even when she’s not on the page, she still lingers with the reader. Peering over his shoulder, whispering to him of forgotten deeds, reminding him that he isn’t really safe after all. 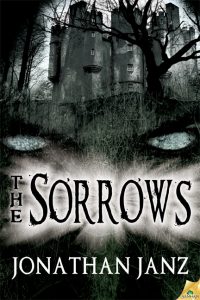 Shameless and unrelated plug for my debut novel

The primal fear Eva/Alma/Anna evokes in the reader is the true reason behind this novel’s resonance. It is awful and it is true and it will give you nightmares, no matter how jaded you are. For my money, GHOST STORY is the best horror novel ever written, and by extension, the inexorable female presence that drives this narrative is one of the finest creations in all of fiction.

Thank you so much, John, for having me on your blog. I’m proud to be published alongside you and hope everyone discovers what a great writer you are. And, of course, I hope they read HOUSE OF SKIN too. There’s an evil woman in my book who’s hungry to meet all of you. She’s seductive and unspeakably cruel. Pick up my novel and give Annabel the opportunity to seduce you too.