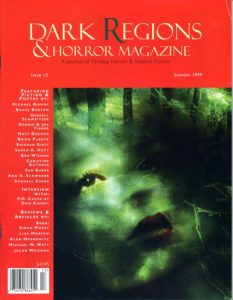 WELL, SUMMERS ARE traditionally slow times for both acceptances and writing for me. I was recently in San Francisco for 9 days on business and began a new fantasy story there about a woman and the moon. (It’s actually based in part on a conversation I held with a fascinating British lady on the plane going out there.) So what news do I have?

I’m currently copy editing a new Joe Lansdale collection for Necro Publications, and was recently promoted from an assistant fiction editor to a fiction editor at Dark Regions (thanks Joe and Bobbi!)

Over the past couple months I’ve sold two short-shorts to anthologies — “The Right Instrument” is due to appear in Funeral Macabre (recently retitled as Hourglass Fiction ) and “Mirror Image” was accepted for Nasty Snips. Both are due out this fall. I’ve also got a short story that was accepted, well, years ago now, called “Direkit Seed” finally due out soon in the next issue of CyberPsychos AOD which will be out sometime next summer.

My first “Shadows in Stereo” column is also due out soon in the first issue of Midnight Hour magazine.