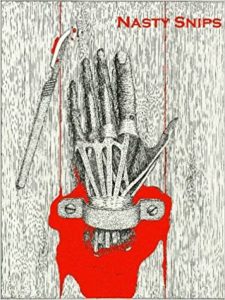 THE BIG NEWS FOR me fiction-wise this winter is having my short story “Mirror Image” appear in the British anthology Nasty Snips, a collection of “short-short” stories which include tales from D.F. Lewis, Gerard Daniel Houarner, Cathy Buburuz, Shikhar Dixit and John Platt, and many others. To order the book, check out the Pendragon Press Publishing website or Amazon.co.uk.

Coming in early 2000, I’m proud to be taking over the Talebones “Bug Music” column for publisher/editor Patrick Swenson (thanks Patrick!) and I have new short stories due out in the final issue of Crossroads magazine, in issue #7 of The Edge and in the first issue of Delirium magazine. I’ve also signed on as a copyeditor for Delirium’s book line and just finished my first project for them — editing an excellent short story collection from Gerard Daniel Houarner, due out early next year. Don’t miss this one!