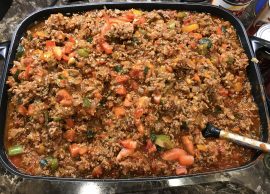 THERE IS NOTHING better on a cold January weekend than a belly-warming bowl of chili. But not everyone can handle the same levels of heat. So when I make chili for my annual winter chili and ale fest for a bunch of guys from the neighborhood, I make a really big vat of it. After the initial base preparation, I separate the chili into three or four different crock pots to simmer for an afternoon with the “heat” ingredients divided among them to make one “kid-friendly” batch, and at least one true “Devil’s Dare” pot.  In my book, a true Devil’s Dare version of the chili includes Ghost Pepper. But the beauty of this recipe is that you can really hedge your bets and try various heat levels. If you’re not interested in having more than one variety, you can easily halve this recipe and choose a single path. But here’s how I do it: 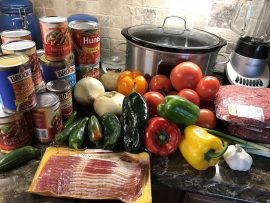 I typically start making my chili just before noon because it takes me a couple hours to get everything browned, chopped, sauteed and simmering – and then after the base cooks on the stove a couple hours, I separate it into three-four crock pots and create the different “hot” mixes which will then simmer in the crocks for another 2-4 hours.

Serve with Sour Cream, Oyster Crackers and grated cheese (I prefer Mexican Chihauha/Quesadilla cheese, but you can use Mozzarella or Colby Jack as well) to top it off. Some people like to add grated raw onion as well.

Make sure you have plenty of cold beer and ice water to wash it down!