Home The Horror Life Dark Delicacies Signing 2008 Or, Why I Love L.A. 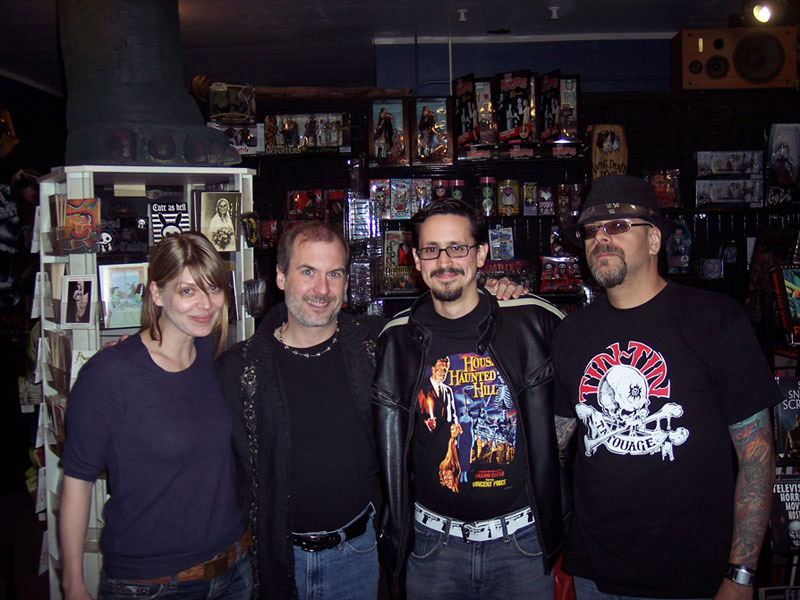 I HAD A BUSINESS TRIP planned to Los Angeles this weekend, and so a few weeks ago I called up Del and Sue at Dark Delicacies Bookstore and asked if they wanted me to come down for a signing… they ended up setting up a “mega-signing” around my schedule (which is embarrassingly cool!) which featured Amber Benson, Del James and Jose Prendes for 5 p.m. on Saturday, April 12.

I arrived in LA later than intended on Friday morning, thanks to the American Airlines grounding (my flight was cancelled and I had to rebook at twice the price on United to get there at all) and took my suitcase straight to the 2nd floor where my work’s workshop was being held. After helping my workmate Krys with registration for a couple hours, I finally actually checked in to the hotel and got rid of my bags, and then audited the course. 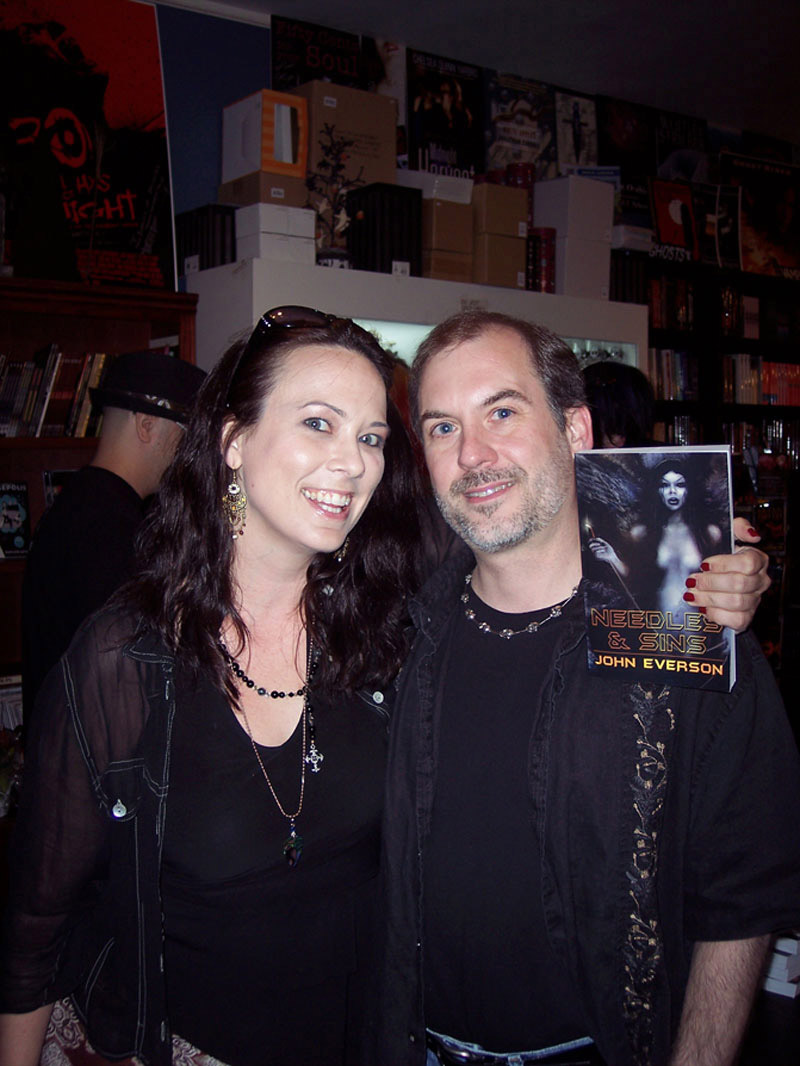 In the meantime, I also set up dinner with Leah Cevoli, a fellow writer and actress who’s probably best known these days for her character voices on “Robot Chicken.” Los Angeles gridlock (caution, foreshadowing here) made for an unexpectedly late dinner, but we still managed to enjoy a couple hours of rabid conversation — and great filets — at Nick + Stef’s Steakhouse (after a strangely difficult treasure hunt to find the place, despite its being located just a block away from the Omni and my holding a map!). Our mutual lack of definition for bordelaise vs. bearnaise sauce engendered healthy extrapolation, but later conversation turned to our mutual friends John and Yasmine Palisano and, perhaps, created a synchronistic event that I don’t even dare set into writing until it is finalized one way or the other. I had just seen John at World Horror, and Leah acted in one of his short films… and hopefully our mutual exchange, which ended up on a 360 loop back to John and Yasmine, works out for the best.

When we realized we were the only ones holding the waitstaff in place, we called it a night, and I went back to the Omni for my now-predictable “no-night’s-sleep”. No matter how comfortable the bed, I never seem to get more than 3 or 4 hours the first night in a new city. I travel every month or two these days, and it’s really become predictable that I won’t get much sleep on day one. I’ve started to wonder if I should just make the best of it and always stay up all night on that first evening in town…

The two-hour time change didn’t help, since I woke up nice and early at 4 a.m. (normal rise-and-shine time back home) and really didn’t get back to sleep. When I looked at the mirror Saturday morning, I thought… great, I’m going to have red vampire eyes this afternoon for the signing. How appropriate!

A pot of coffee and a few squirts of Visine later and I was fine, and once my business sessions were done for the day, I did a quick presto-change-o act in my hotel room and hopped in a cab with only a half hour to make the 14-mile ride to Burbank.

The cabbie slipped into local traffic easily enough, and then zipped onto the freeway… and then… came to a complete stop. I found myself instantly stuck in Los Angeles gridlock (see – foreshadowing really could help change our lives if we only paid attention and planned accordingly)…I panicked a little — how retarded would it be if they set up a signing around my timetable, and I showed up a half hour late? But my intrepid cabbie, after not-so-quietly cursing out a couple of clueless motorists, dropped me in front of the store with exactly 2 minutes to spare.

I walked in and found the place packed — there were lines formed and waiting to head to Amber and Del, and I quickly said hi to Del and Sue, and slipped through the store to grab my spot at the signing tables and found my own entourage waiting — they didn’t need to form a line, but they were exceedingly welcome! 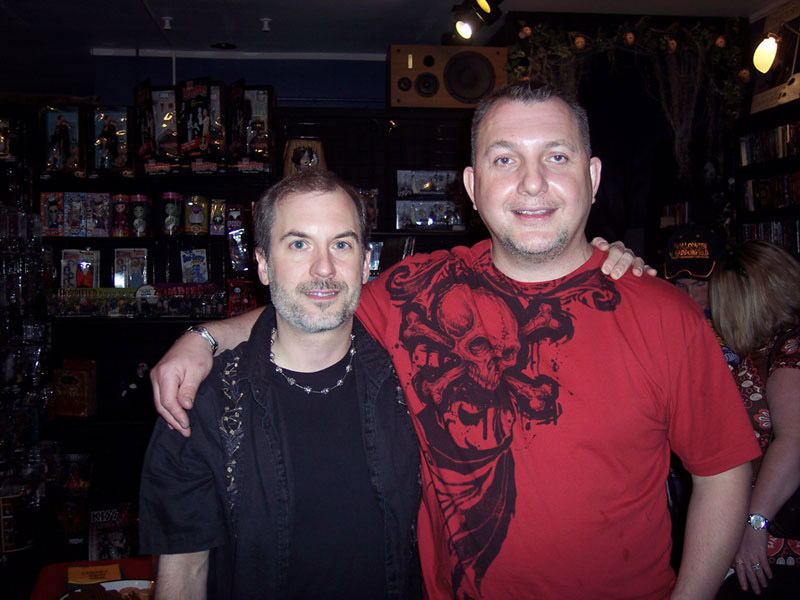 My friend P.S. Gifford had driven up 60 miles with his family and even brought me Newcastle! Now THAT’s a pal!!! And Maria Alexander, Cody Goodfellow and Eddie “Feo Amante” McMullen were waiting as well. Later, John Skipp wandered in, and Leah Cevoli popped in to grab a book and a photo on her way to a gig, and Lisa Morton turned up as well.

My longtime MySpace pal Maria also made it over this year (she’d wanted to come when I was at Dark Delicacies last year but couldn’t make it). It was really great to meet her — I only wished she’d brought some of her handmade jewelry (she was wearing a couple samples) – I would have returned the favor and bought something from her!

Del handed me a stack of books to sign that had been pre-ordered through the Internet, and I also signed a couple copies for people who had come in to see Del and Amber, but decided to take a chance on Needles & Sins. I hope they enjoy it 🙂

It’s amazing how fast an hour and a half passes. I signed a few books, talked a little to Paul Gifford and Eddie and Cody and Del… and the Newcastle was drained quickly… I met my fellow signers, who were wonderful, and also met the wildly animated Rue Morgue magazine editor JovankaVuckovic, who’d come down from Canada to see Del James but was really taken with the cover art of Needles & Sins. 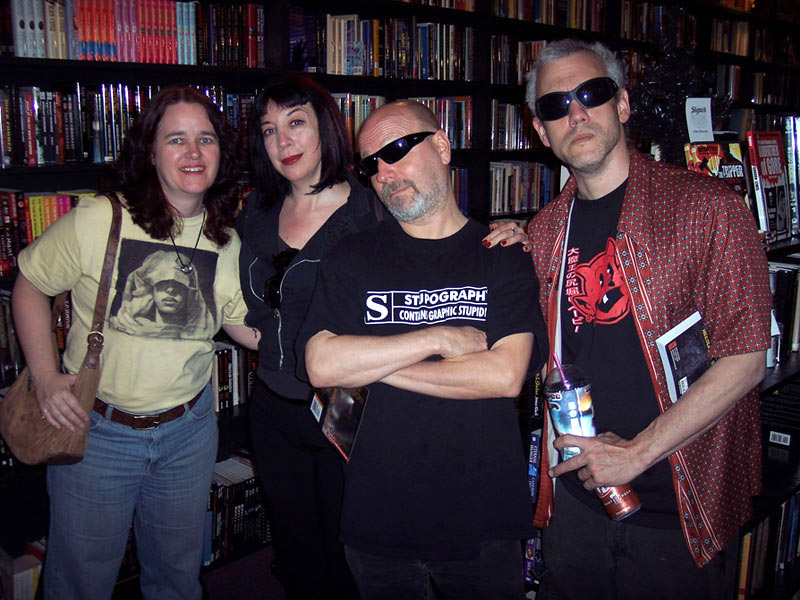 Before long, the lines of signers that had seemed so full when I first entered the store had collapsed to a few hangers-on, and I found myself talking to Amber Benson about her writing partner Christopher Golden, who I’ve met a few times. I asked if she ever frequented the Shocklines Message Board. She said she tends not to read boards much, because people seem to always be getting into flame wars, a sentiment I seconded. Message boards are addictive — you can easily lose hours every day to their conversations, as well as get sucked into any number of battles. Nevertheless, I told her that I did post on Shocklines that I would be signing with her, and I told her of the amusing response I’d gotten from John Goodrich and Darrin “dwenglish” there — John Everson will be signing Amber Benson????

She grinned at that, and then went back to signing some books for a few newcomers…But then a couple minutes later, she handed me a silver pen and held out her arm.

So… thanks to Paul Gifford manning the camera, I present to you the evidence of the oddly curious happening that was John Everson, Signing Amber Benson: 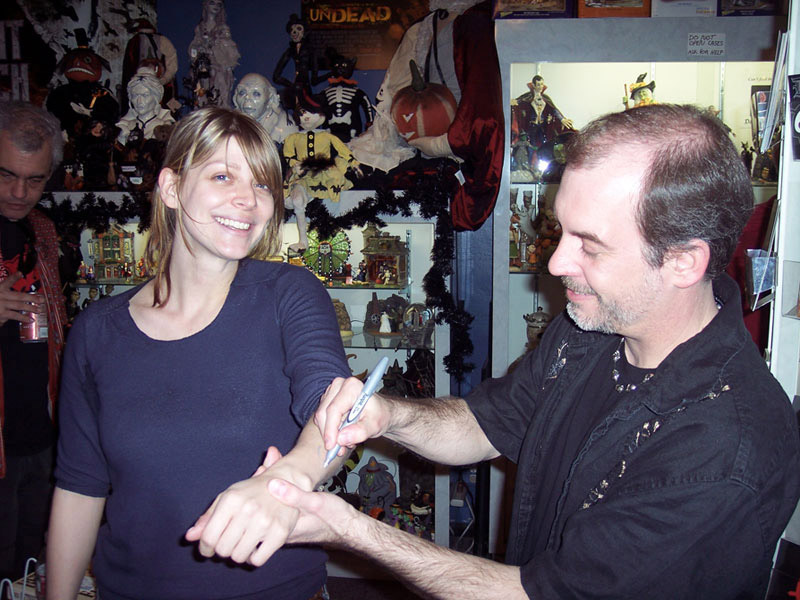 I hope Darrin and John are happy!

And Amber, you were an amazing good sport… I hope that silver ink came off easily!

As I said, 90 minutes passes quickly, and all of a sudden it was time to close up shop — and I felt like I had barely even said much more than hi to my friends who’d come out to the event. I bought a couple quick things from the store (like a stuffed Frankensteinian kid for my son) and then Eddie shanghaied me for a “five-minute” look at a “UFO that had crashed into a building a few blocks away.”

No locals would refute his claim, and despite my skepticism and insistence that this was akin to going on a boyscout trip to the fields to look for snipes with flashlights and paperbags, I went.

As the pictorial evidence shows, clearly, there was an alien invasion recently thwarted in Los Angeles. Note especially the tentacles holding up the computer shelf: 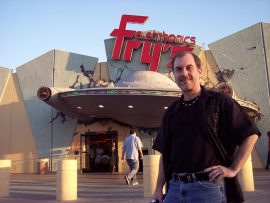 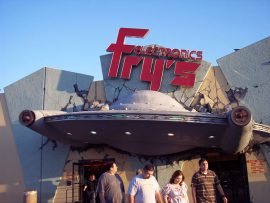 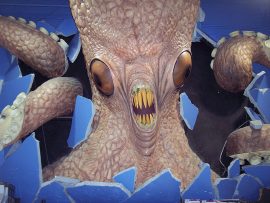 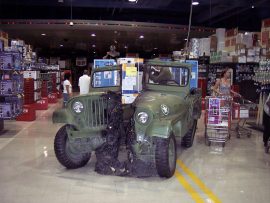 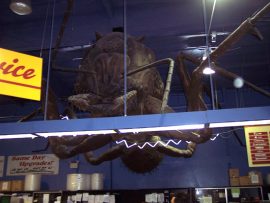 After my trip through the themed Fry’s store, and an unexpected detour the details of which I promised I would not relate, I arrived in Pasadena (ironically, just a couple blocks away from the hotel I stayed at for business last year when I also did a Dark Delicacies signing) to have dinner with Maria Alexander and Christophe (who she has simply dubbed, “The Frenchmen.”) They took me to a marvelous feast at the Vertical Wine Bistro, a tapas place where we enjoyed a couple glasses of fine wine, some stuffed dates, pulled pork, duck, various salads and could-eat-it-all-night sorbet.

Just as with the signing, the night ended all too soon… and Maria dropped me back at the Omni. I slept a lot sounder Saturday night (the wine and a nightcap of Chimay and Makers probably didn’t hurt) and Sunday was pretty much a full day of travel — with a 4-hour flight and a 2-hour time loss (and the slowest baggage claim I’ve ever gone through) it was dinnertime before I got home… and here it is almost midnight as I finish this quick (ha-ha) signing report.

I had a great time in Los Angeles — as always.

I didn’t get to spend nearly enough time with my friends there — as always.

All I can say is I hope I can get back soon!

Here are some more photos from the signing: 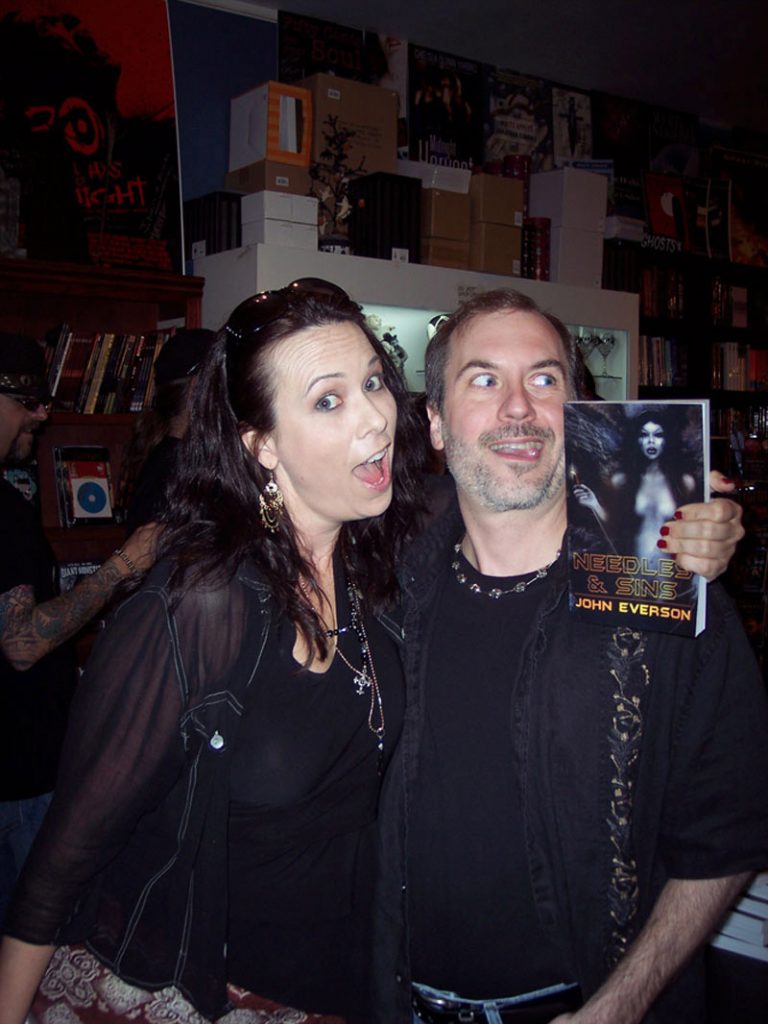 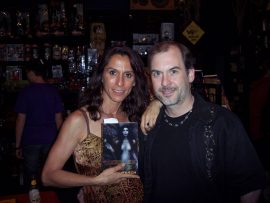 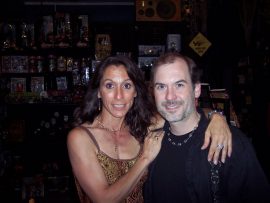 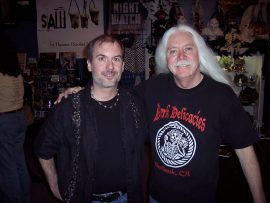 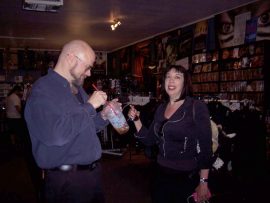 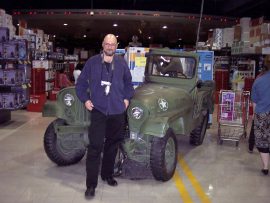 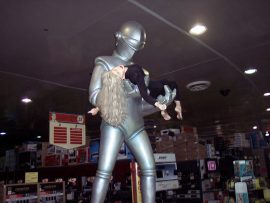